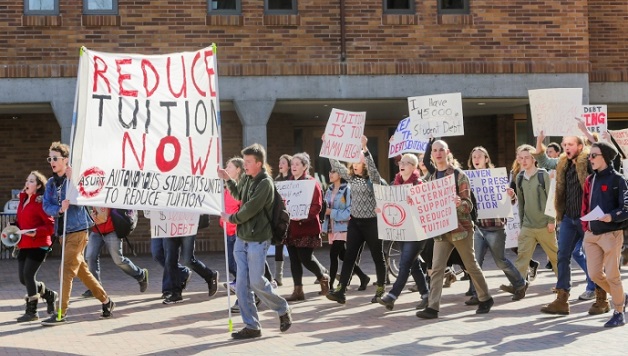 For many young people in America, higher education is seen as the only path to economic opportunity and security. Low-wage workers fighting for $15/hour are constantly told by the capitalist media and politicians that, if they want a job that provides a living wage, they just need to go to college or university.

At the same time that young people are told that a degree is the only way to secure their futures, the cost of higher education is skyrocketing. Despite rhetoric about how important college is, the facts show that “[s]ince the start of the recession, states have cut higher education funding by 23 percent per student.  Even today, as state revenues return to pre-recession levels, most states continue to fund their colleges and universities at much lower levels than before the recession” (“States Are Still Funding Higher Education Below Pre-Recession Levels”, Center for Budget and Policy Priorities 1 May 2014).

Cuts to higher education funding and the shifting of the majority of the costs of education from the state to students are trends that have increased greatly since the recession. However, they are also part of the broader global rise of neoliberalism and austerity since the 1970s.

For example, over the past twenty years in Washington state, the percentage of the cost of a student’s education that the state pays has dropped from 80% to 30% (“Washington state’s broken model for higher-education funding,” Seattle Times 24 June 2012).

While unaffordable college is a nationwide problem, higher education in Washington has been hit particularly hard in recent years. Washington has seen an increase in average tuition of $4,085 since the recession, the second highest tuition increase in the nation (“Washington State Higher Education Cuts Led to 2nd Largest Tuition Increase in Nation”, Washington State Budget and Policy Center 1 May 2014). Now, the legislature is considering further cuts to higher education funding of up to 15% (“What would 15% cut mean for state’s colleges?” Seattle Times 23 Sep 2014).

To address this crisis in higher education, students at Western Washington University in Bellingham, Washington, including members of Socialist Alternative, launched a new coalition called Autonomous Students United to Reduce Tuition (ASURT). ASURT was initially formed at the end of the 2014 fall quarter by Socialist Alternative and other campus organizations including Students for Social Change and Student Labor Action Project.

After the winter break, ASURT began organizing for the public launch of the tuition reduction campaign. The first public meeting was held on February 2. This meeting allowed for a productive discussion of what the demands and strategy of the student movement should be. Obviously, one of the key demands ASURT puts forward is an immediate, significant decrease in tuition costs for all students. This could be achieved by taxing the rich and closing corporate tax loopholes in order to fund higher education.

Another demand is for a democratic student union to fight for students’ interests. The experience of the Quebec Student Strike in 2012 shows just how effective student unions can be. Unfortunately, the U.S. does not have the same experience that many other countries do with student unionism. However, through the course of struggle and the building of a mass movement, the need for democratic organization will become apparent. Student unions can be pointed to as a way to address these needs.

ASURT also calls for the abolition of student debt for all current and former students. While this goal is certainly ambitious, it points all the more clearly towards the need to build the broadest, most powerful mass student movement possible.

After the success of the first public meeting, ASURT organized a march across Western’s campus on March 4, which has been a student day of action in past years. The specific target for this march was to demand that Western’s President, Bruce Shepard, take concrete and meaningful action to achieve tuition reduction.

ASURT organizers estimated at least 70 students in attendance. They marched all the way from south to north campus and past the administration’s offices in Old Main, chanting all the way. At the end of the march, a short rally was held, and the crowd responded enthusiastically to the radical ideas and demands put forward by the student speakers. The task now for ASURT is to channel this energy and potential radicalism in an effective direction.

This march was merely the first step towards building a student movement that can reduce tuition. By holding the march, ASURT can spread awareness, achieve legitimacy, and gain support at Western Washington University. In order for the campaign to achieve real success, two key goals must be accomplished.

First, the movement must spread beyond Western. The state legislature is ultimately who controls higher education funding, and they have the power to provide resources that are needed to make college affordable in Washington. It is even more crucial to create a powerful, nationwide student movement by linking with student activists and campaigns nationally, as well as social justice campaigns such as the $15 minimum wage fight, if we hope to alleviate the massive burden of debt for all students and workers.

Second, students must organize to take radical action. The university administrations are not interested in take action on behalf of the students. And the legislature has no intention of reversing its position and increase funding. They won’t act unless they are forced to do so.

To achieve this, students need to disrupt the functioning of the universities through sit-ins, occupations, and ultimately student strikes. This is the lesson, not only of recent student movements such as the Quebec Student Strike, but of social movements throughout history.