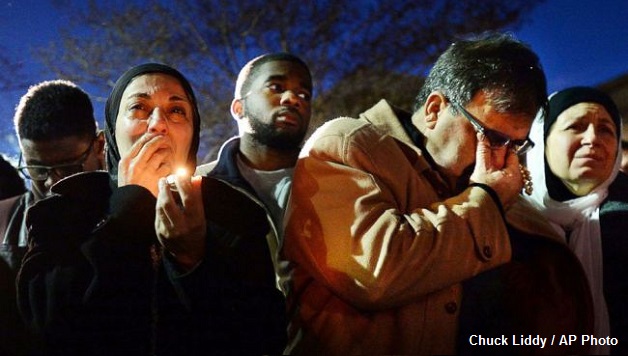 Since Craig Hicks entered into a Chapel Hill, North Carolina apartment and shot three young Muslims execution-style, there has a been a massive wave of outcry across the world. This outrage has been rightly amplified by the fact that most major corporate media outlets have either omitted the story or stuck to the main narrative of it being over a “parking dispute.”

Hicks, a self-styled “militant atheist” who has put forth Internet posts calling for all religions to “kill each other” has had his motives actively defended in the corporate media, with many stating there is no evidence to believe that the action was motivated by ‘religious hatred’. However, these same news outlets are among the loudest to publicize terror attacks by those from backgrounds rooted in Islam. The double standard in treatment is thundering in its shamelessness.

Malcolm X once noted, “You can’t have capitalism without racism.” The same thing could be said for ethnic and religious hatred. The capitalist media’s emphasis on what amounts to excusing acts of violence against Muslims, as shown in its coverage of the Chapel Hill murders, is just another example of this dynamic at play.

Socialists stand against all acts of individual terror and mourn all those lost in its wake. Craig Hicks should be tried to the full extent of the law. However, as long as we have to live under a system that treats the lives of some as more significant than the lives of others, we don’t think this will ultimately prevent future acts of violence. What Chapel Hill exposes – in a tragic manner – is that the alienating and racist environment encouraged by the elites has deadly consequences and that we must start to root it out at its source, by organizing ourselves for an alternative based on human needs and unity rather than on exploitation and racism.