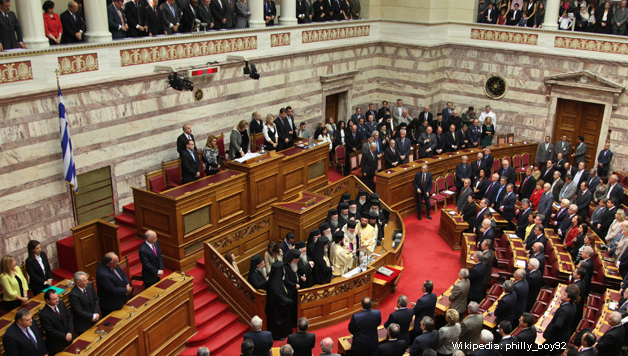 The historic election of the Coalition of Radical Left (SYRIZA) on January 25 brought to power for the first time a left government in Greece – following five years of savage austerity measures that have left the country in a shambles akin to the aftermath of war.

The next day, the iron barricades encircling Parliament were removed. Within a week more barricades, road blocks and the ubiquitous police buses were gone from the city. One newspaper called it “The Liberation of Athens” from a “barricaded democracy that treated its citizens as enemies.”

The measures announced by the government in the first week included restoring the minimum wage to pre-crisis levels (750 euros a month); raising low pensions; abolition of hospital visit fees and prescription costs; ending the forced sale of homes of people who cannot keep up with mortgage repayments; scrapping planned privatizations; re-employing of more than 10,000 civil servants and workers sacked from the public sector; providing citizenship for children of immigrants born and raised in Greece.

In the first two weeks, three massive mobilizations took place all over the country, in support of the government ministers who were negotiating with the European creditors.  Immediately, polls showed overwhelming support including from opposition party voters.

In the face of economic collapse and bankruptcy because of enormous indebtedness, a “bailout” for Greece was imposed in 2010. Under the  bailout terms, the Greek state was in essence captured by the Troika (representing the European Commission, European Central Bank and International Monetary Fund) which controlled all aspects of economic life.

The conclusion from this, as Xekinima-Socialist Internationalist Organization/CWI, Socialist Alternative’s sister organization in Greece, has argued, is that,  “In these times of deep economic crisis and desperate social needs in Greece, it is not possible to be on the side of the ship-owners and the workers, with the businessmen and with unemployed.”

Not a Single Step Back!

SYRIZA bases its negotiating strategy on the expectation that a Greek default or exit would deal a deadly blow to the Eurozone.

On the other hand, the European “partners” know that any concession to the left government of Greece will only whet the appetite of those in Portugal, Ireland, Italy, Spain – the so-called PIIGS – eager to escape the grip of austerity. Madrid saw 150,000 demonstrating in support of the new Greek government, while Podemos, the new anti-austerity party, is leading opinion polls in Spain. SYRIZA’s victory is seen as a harbinger of a new era with the potential  to inspire and to forge a  working-class movement across Europe to defeat austerity and begin a wider fight against the capitalist system which created the crisis in the first place.

In the next period, any illusions that SYRIZA can, through negotiations, convince the European Union of the bankers and the bosses to grant justice for the people of Greece and its neighbors will be shattered.

Peace Torpedoed over Hydrocarbons in the Eastern Mediterranean