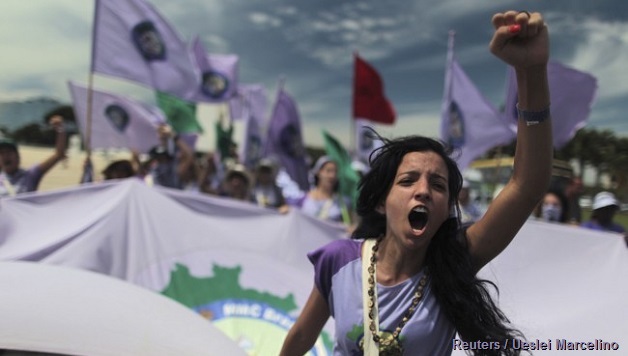 Today’s women’s movement stands on the shoulders of countless women who fought against oppression in all its forms and won substantial reforms. From the abolitionist movement to the labor movement to the Civil Rights Movement, women have been at the forefront in the struggle for the rights of all oppressed people. It was Rosa Parks (and other black women before her) who refused to give up her seat on the segregated buses of Montgomery, Alabama, which sparked the Civil Rights Movement. It was Mother Jones who led the crusade against child labor in the early 20th century, forcing the issue into the national spotlight. Following in this tradition, it has been women leading the way in the fight for a $15 minimum wage.

Martina Phelps and Caroline Durocher were two of the first fast-food workers to walk out of their workplace and strike in Seattle. Kshama Sawant, after winning the city council seat, launched 15 Now. All of this together sparked a movement that saw Seattle become the first big city in the country pass a $15 minimum wage just one year later. This victory comes after decades of defeats for the labor movement and demonstrates the power of organized action around a clear demand.

Walmart’s recent announcement to pay its employees no less than $10 by February 2016 – a raise for over 500,000 workers nationwide – is another indication that workers moving into struggle produces tangible gains for the entire workforce.

Though the U.S. is experiencing an economic recovery, the recession cut deep; many people continue to struggle under the weight of unemployment, underemployment, lack of workplace rights, unequal or low pay, and continually rising living costs. Women make up a majority of low-wage workers, women make up a majority of tipped workers who make a subminimum wage of $2.13, and women have been disproportionately affected.

Workplace rights and a $15 an hour minimum wage, for predominantly female low-wage workforces, would dramatically improve the economic conditions and social power of women. If the mainstream women’s rights groups and big labor unions linked the fight for $15 to the wider fight against sexism, it would strengthen both struggles: the fight for $15 necessitates unity between women and men in the low-wage workforce who are battling a common enemy: the big corporations. This unity would be a major step toward overcoming the divisions forced on us by capitalism.

Destroying the Roots of Sexism and Violence Against Women

The inequalities between men and women and the violence against women flow from the deeply ingrained idea that women are possessions of men, exist to gratify men’s needs, and should depend on and submit to men. These ideas stem from women’s role in reproduction and property inheritance in class based societies. Women’s sexual lives were relegated to producing offspring that would inherit the father’s property, and women were seen, therefore, as property themselves.

The economic oppression of women underlies this systemic violence. The number one reason women stay with abusive partners is that their partners control their access to money, leaving them without the economic ability to escape.

From college campuses to the military to the homes of NFL players, there is an epidemic of sexual assault and violence toward women. And, on top of the violence faced by women, the massive cover-up from these institutions, further oppressing survivors and defending perpetrators – a culture of misogyny and oppression that has to be broken up.

In recent years, a new generation of women and opponents of sexism have been fighting back. Rape on college campuses has been met with young women and men organizing for stricter legislation and protections for victims. #CarryThatWeight, in particular, inspired women to join a rape victim in solidarity, helping her carry the weight of her experience and denounce the university’s pathetic lack of response. In 2011, thousands of people across the world participated in “SlutWalks” to challenge victim-blaming.

History shows, again and again, that nothing has been more effective at undermining sexist ideas than the combination of women playing a full role in society and in production, as well as women and men organizing and fighting together for their common interests.

Before women joined the workplace en masse during World War II, most women were expected to raise children, cook and clean, and submit to their partner’s authority. Since the vast majority of men were needed for the war effort, leaving many factories and workplaces without necessary labor, women entered the workforce in large numbers for the first time. Once the war ended, many women stayed in the workplace, working alongside men, proving they were equals, and fighting alongside men for better wages and workplace conditions. This experience helped undermine sexist ideas in the workplace and society at large, laying the foundation for the women’s movement of the ‘60s and ‘70s, as well as providing a model for how to continue the struggle to end sexism, sexual assault, and violence towards women.

Winning the Genuine Right to Choose

Reproductive justice and the right to choose is more than just the legal status of abortion. In reality, access to reproductive health care has been cut off for many women who already cannot afford to overcome expensive obstacles such as long travel to the nearest provider, 72-hour waiting periods, and mandatory counseling, all of which can require several days off work.

Socialists stand for the genuine right to choose: for free, high-quality contraceptive care and free, safe abortions accessible to all. Socialists also stand for securing all that is needed for women and families to choose life. Without economic security, free child care, health care, access to healthy food, quality housing, and education, many women feel unsupported and unable to provide the adequate care necessary for raising a child.

The Case for Socialism

Women’s oppression is not etched into the DNA of humanity. It’s material roots are the class society in which we live, and the economic system of capitalism that depends on it for survival. Any strategy aimed at gaining more rights for women and ultimately ending women’s oppression will not achieve lasting victories without extracting the roots.

Once the roots are extracted, though, what would we plant in their place?

Under capitalism, decisions are based on the maximization of profits for a tiny elite – the shareholders and owners of finance capital. By weakening the resistance of the working class through division along gender, race, religion, and sexual identity lines, working people are convinced to tolerate it. And it is by overcoming this division that we are able to effectively organize and fight for tangible victories now, while challenging the entire capitalist system.

Through our collective struggle for concrete improvements – $15 an hour minimum wage, free child care and education, decent housing, and jobs for all – we will develop the confidence and conviction to wrest economic and political power from the hands of big business CEOs and place it into the hands of the working class. Once in the hands of the working class, a democratic socialist society can be constructed, whereby the economic decisions would be based on meeting the needs of the people and the environment, not on maximizing the profits of the few.

The Origins of Sexism and Women’s Oppression

The battle for abortion rights, equal pay for equal work, and equal consideration in all aspects of life, from sports to the workplace, was fought, and major victories were won, by the women’s movement in the 1960s and ‘70s. Yet these gains are being rolled back, particularly access to safe and affordable reproductive care.

This attack on women’s rights has prompted a new generation of young women and men to ask: Why the hell do we have to keep fighting for the same rights our grandmothers won?! More and more women are elected office, women comprise a larger number of highly skilled professions like doctor or engineer, and women have excelled in nearly every field in which they endeavor. So why, then, do sexist and misogynistic ideas persist?

These questions have led many to conclude that the problem is patriarchy and men’s privilege over women and that the solution is changing men’s attitudes toward women through education, through men learning to check their privilege, and through promoting women to leadership roles. While educating men on women’s issues and promoting women to leadership roles are important steps toward uniting men and women in a common struggle for their common liberation, they don’t target the root of sexism and patriarchy. In reality, they focus the blame on men – which divides working people – rather than the conditions that produce sexist ideas and patriarchal violence.

What, then, is the root of sexism and patriarchy, and how can we effectively tear it out of the foundations of human society and win women’s liberation?

Inequality between men and women is not something “natural” that always has, and always will, exist. Archaeological data indicates that for most of human history – before the rise of civilization made possible by the advent of agriculture – men and women generally lived as equals. It was the emergence of class society, the division of society between those who work for a living – workers, or the working class – and those who control the resources needed for production and live off the labor of workers – in the past, slave owners and feudal lords; today, the capitalist class – that women came to be subjugated by men. But not without a fight!

The history of civilization is that of men and women struggling to regain what they lost in the development of class society: full and equal control over the resources and the power to determine our future. Ending women’s oppression, therefore, is intimately linked to the struggle to end class society and for an economic system that is democratically controlled and run in the interests of all working people. This can only be achieved by overcoming the division of men and women.

As Helen Keller argued in 1913 in the struggle for women’s suffrage:

“The country is governed for the richest, for the corporations, the bankers, the land speculators, and for the exploiters of labor. Surely we must free men and women together before we can free women. The majority of mankind are working people. So long as their fair demands – the ownership and control of their lives and livelihood – are set at naught, we can have neither men’s rights nor women’s rights.”

To wage an effective struggle for a society that benefits the 99%, a society in which women receive equal pay for equal work, free child care, free education, and free and equal access to reproductive health care, it is necessary to build the maximum unity of all those oppressed under this system – the working class.

The biggest obstacle to this joint struggle is the grip of sexist ideas on men, strengthened by the small crumbs this system offers men above women. A constant struggle to fight sexism in all its forms is needed, by women and men. The most effective method to overcome prejudice and discrimination is the united struggle itself.