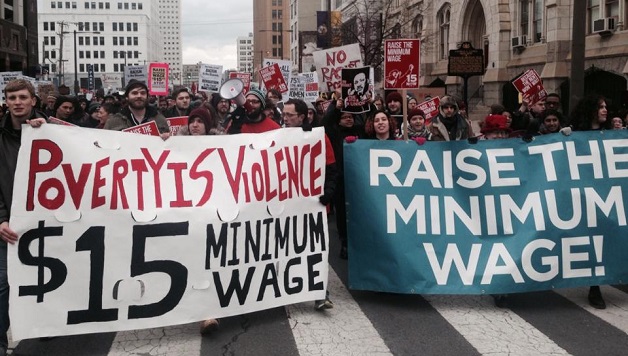 Nearly 47 years ago, Dr. King was assassinated at a point when he and other black activists were building a mass campaign against poverty. Today, state-sanctioned segregation is gone, but legal equality has barely changed the material conditions of black Americans. In Philadelphia, a city with a large black population, the majority of black workers still face low wages, horrible working conditions, and a lower quality of life than white workers.

This year, in the midst of the Black Lives Matter protests, Philadelphia faith institutions, community organizations, and unions resolved to reject the sanitized MLK “day of service” and, instead, uphold Martin Luther King’s true legacy of radical direct action. Moreover, the MLK Day of Resistance, Action, and Empowerment (MLK DARE) embraced a range of bold economic and social demands to improve the quality of life in black neighborhoods.

On January 20, up to 7,000 marched, calling for an end to racist police practices like stop and frisk, for a civilian police review board with real power, for fair funding and democratic local control of our schools, but critically, the broad MLK DARE alliance emphasized the demand for a $15 an hour minimum wage. Rev. Gregory Holston boldly proclaimed that MLK DARE is “pressuring the city to raise the minimum wage locally to precipitate a legal showdown over” the state’s ban on raising the minimum wage.

In less than a year, the convergence of #BlackLivesMatter and #Fightfor15 has elevated the $15 minimum wage from obscurity to the center of political debate in Philadelphia. Next, 15 Now will struggle alongside its new allies of faith and labor unions to turn this bold demand into a material reality for working-class Philadelphians.

On MLK Day, we chanted and marched for justice, instead of listening to the lies of washed-up establishment politicians. We voiced our demands with the memory of Dr. Martin Luther King, Jr., who at the end of his life was working to build a “a multiracial army of the poor” aiming at nothing less than the “reconstruction of society.”