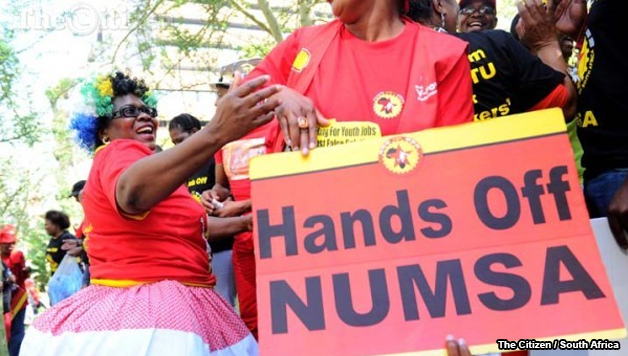 The pro-ANC right-wing of the Cosatu leadership has accomplished what the apartheid regime could not and split the 2.2 million strong trade union federation. On the night of 7/8 November – dubbed the ‘night of the long knives’ in the press – Cosatu’s Central Executive Committee (CEC) voted 33 to 24 in favour of expulsion of the metalworkers’ union NUMSA. This action was taken to punish NUMSA for their December 2013 decision to break with the ANC and the steps they have taken toward the creation of a socialist political alternative. For the ANC, the split in Cosatu is a disaster. Their strategy to turn Cosatu into a ‘labour desk’ of the ANC has failed and NUMSA has been put beyond their reach. In their attempts to subordinate Cosatu within the Alliance and neuter working class resistance they have inadvertently accelerated the re-emergence of the working class as an independent political force.

In NUMSA general secretary Irvin Jim’s marathon three hour presentation to the CEC refuting every charge and accusation levelled at NUMSA, he summarised precisely why NUMSA was being targeted, when he said, “You want to expel us because we constantly remind you how you are failing to protect the interests of the working class”. Jim further warned that, “inside or outside Cosatu, we will not stop mobilising the working class on the road to socialism. We will not give you any peace as we expose the miserable failure of the class alliance you are entangled in and how it compromises your ability to lead the working class.”

The unions whose ‘leaders’ voted for NUMSA’s expulsion are riddled with corruption and splits and do not have the support of their members for their actions against NUMSA. The general secretary of the transport union SATAWU recently appeared in leg irons in the commercial crimes court charged with theft but is still in office and welcome at Cosatu meetings. The CEPPAWU leadership has not convened a national executive for over two years in order to protect their positions. Several CEPPAWU regions have publicly voiced their opposition to the leadership’s support for the right-wing in the course of Cosatu’s crisis.

Splits in these unions are likely and some are already underway. The former president of the pro-ANC led South African Democratic Teachers Union (SADTU) is pioneering the launch of a new public sector trade union after being expelled this year for his support for Vavi. The potential exists to create a new trade union federation, replacing the class collaboration of the Tripartite Alliance with the principles of working class political independence and socialism. That possibility has been acknowledged by FAWU deputy general secretary Moleko Pakhedi at the press conference of ‘the seven’ on 10 November.

The seven NUMSA allies are resuming their court action to force the convening of a Special National Congress of Cosatu. A special congress could elect a new leadership and reinstate NUMSA. For that reason the demand has been refused by the right-wing for over 18 months despite the criteria for convening a special congress having been met. The right-wing will continue to resist this and block NUMSA’s return. A new scab metal industry union – the Metal & Allied Workers Union of South Africa (MAWUSA) – is expecting to complete its registration with the department of labour by year end. Founded by former NUSMA president Cedric Gina, who abandoned NUMSA just before its 2013 special congress, they have requested admittance to Cosatu.

The blame for the break-up of Cosatu lies with the right-wing. They have betrayed every principle of working class political independence, worker control and socialism. All that remains within Cosatu of the traditions that gave birth to the federation in the 1980s battle against apartheid is the name.

We support the efforts of NUMSA and its seven allies to continue the battle for a special congress. However, time must not be lost in laying the basis for a new socialist trade union federation should that battle fail. NUMSA has already announced it will go ahead with the national launch of its United Front, which WASP participates in, on 13-16 December. NUMSA is also convening mass meetings of its members and shop stewards across the country with an invitation to all Cosatu members to participate whether or not their leaders voted for the expulsion. They have also said their members should continue to attend Cosatu structures. This is the correct strategy as it is absolutely crucial that workers and rank-and-file members are drawn into active participation in the remoulding of the labour movement.

But more, WASP believes that out of these meetings a date should be set early in the new year for a conference to discuss the way forward for the trade union movement. This should be open, not just to NUMSA and its allies, but members and structures of other Cosatu affiliates, affiliates of the Nactu trade union federation, independent unions and groups of unorganised workers struggling to found new unions.

WASP has consistently raised the idea of a Socialist Trade Union Network based on such broad forces. The time for such an initiative is here and could be launched from the conference we are proposing. The immediate task would be to rally those forces in the trade union movement genuinely committed to socialism and worker-controlled trade unions and bring the full force of the organised working class to bear in the battle to reclaim Cosatu. Such a Network could overcome the paralysis of working class struggle created by Cosatu’s crisis and give a lead in the looming public sector wage struggle, the struggle to enforce the wage settlement in the metal industry and the struggle to scrap e-tolls. It would simultaneously lay the basis for greater unity and cooperation with non-Cosatu unions should that battle to reclaim Cosatu succeed or bring together the forces that could be the basis for a new trade union federation should that battle fail.

Linked to the building of working class unity around a strategy of class struggle must be the creation of a mass workers party with a socialist programme. A mass workers party could unite organised labour with the communities and the youth by expressing the general interests of the working class – the creation of a socialist society. This is the greatest fear of the capitalist class and their political representatives in the ANC and SACP. But the opportunity must be boldly seized. We call on all those who support this strategy to participate in NUMSA’s United Front and to join WASP and work with us to help bring such a party into being as part of the struggle for a socialist South Africa and a socialist world.