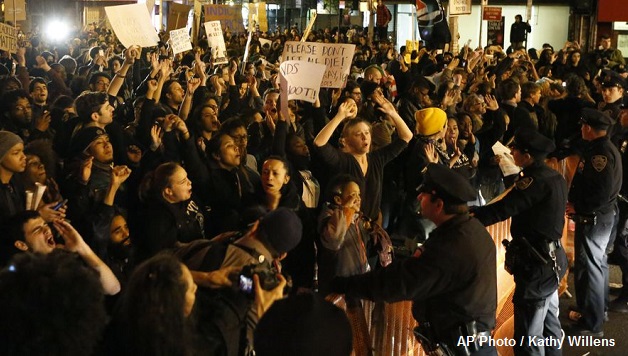 After the failure of the Grand Jury to indict Officer Darren Wilson, protests erupted in over 170 cities across the US demanding justice for Mike Brown and an end to systemic racism.  Below we report on the mood around the verdict from protesters in a number of cities where Socialist Alternative has branches.

On Tuesday November 25, Socialist Alternative initiated and participated in a march and rally for Mike Brown.  At the rally, the demands for police body cameras as well as civilian oversight of the police from Socialist Alternative member Albert drew an explosive response of support from the crowd.

Local media coverage of the rally:

The following Saturday, a public meeting was held, drawing approximately 40 people, many of them community activists of various backgrounds and people with extensive connections in local media and the city’s communities. The discussion brought forth many excellent ideas for policing the police from attendees including community-based policing and creating a police force that is emotionally and personally connected to the community it polices.

After the discussion Socialist Alternative Mobile initiated a coalition to enforce police accountability.

The Ferguson solidarity rally in Boston was held in a historically black neighborhood Roxbury (where Malcom X lived as a teenager) adjacent to a police station.

Speeches at the rally escalated from “it is not enough to be here today, this is a system issue that we have to tackle” to “the variety of faces–black brown and white– speaks of a revolution, and what we need is a revolution” to eventually “why the hell are we standing around waitin’ for someone to tell us something? Let’s take to the streets!”

The march of approximately 2,000 took up the full street and marched to a nearby jail. Here chants included “black lives matter!” and “the new Jim Crow has got to go.” Prisoners wrote Mike Brown and other solidarity messages on their windows while flashing lights and banging on the bars to show enthusiasm.

After facing off with the cops at this location in an attempt to take the highway for a solid 35 minutes, the crowd then took Mass Ave–the most iconic and busy street in the city. Both sides of this divided road were completely stopped as marchers chanted. Energy was high and protesters tried to take the highway through several other entrances. On November 25, 2014, Spokane Socialist Alternative took part in a downtown Spokane march of about 250 people in protest of Darren Wilson’s “acquittal.” David Brookbank of Spokane Socialist Alternative was one of the first to address the crowd, expressing our solidarity with the people of Ferguson and to bring attention to unindicted police who have killed local Spokane area citizens – both Native American and African American – over the past 15 years.

Video of the rally and “die-in”: On Tuesday evening, November 25, over a thousand of people gathered in Union Square to demand justice for Michael Brown.  Frustration with the status quo reached a boiling point as people shut down the Lincoln Tunnel (tunnel between NY and NJ), FDR Drive (one of NYC’s main highways), and other major highways throughout New York City.

Members of Socialist Alternative successfully rallied, marched, led chants, and opened up a broader conversation about combating police brutality, racism, and capitalism with clear demands.    Student groups, community organizations, and labor unions made up a large portion of the massive crowd.  Throughout the evening, low-wage workers in various corporate chains along the route raised their fists from behind counters and windows.  The link between racism, police repression, and economic exploitation permeated the consciousness of both participants in the march and supportive bystanders.

A group of about 1,000 people marched and shut down highway traffic in Oakland.  Protesters hit a line of cops at the freeway area. People started to get intimidated, but we kept marching. We completely shut down traffic in one direction, and some motorists actively cheered and high-fived the protesters.

November 24 – In Minneapolis, the protest had begun in two different spots; one started at the University of Minneapolis and the other on Lake Minnehaha. It was a strategic location because the police station was smack-dab in the middle of it all. The speakers were very heart-touching, several black speakers discussed the racial discrimination they face in everyday life.  It showed the deep unrest in black society, how the Mike Brown shooting was so obviously wrong, it just couldn’t be covered up; the black community had enough.

The chant “Black lives matter” had then taken a turn and changed into “All lives matter” which was problematic for some, but we continued to march onto the highway. We stopped incoming traffic from cars merging on the highway, putting our signs up and yelling “Hands up! Don’t shoot!” There was a lot of mixed responses from the drivers, some showing support, others clearly disapproved.

Overall, the protest was exciting.  Though the protests included many people of color, white people comprised the majority of the crowd.  Calls for black empowerment are typically misinterpreted as mutually exclusive to black people or offensive to others from different ethnic/racial backgrounds, so it was surprising to see how much support the black community got from members from non-black communities. It was cold but the support was wild, this being one of the most successful and energetic protests I’ve been to locally.