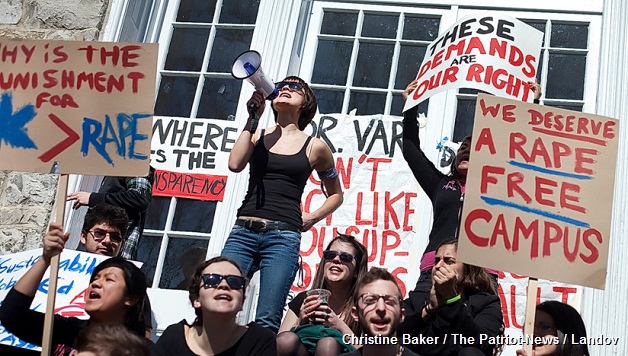 Fight the Attacks of the Right: No Faith in the Democrats

In the US media and popular culture it is increasingly common to see women shown in places of political and economic power. However, the reality of most women’s lives is completely at odds with this picture.

For example, the jobs that the majority of women are concentrated in are low pay, non-union, service sector jobs with the wage gap still at 77 cents to a man’s dollar. Among African-American and Latina women, the gap is even wider, with African-American women earning 64 cents and Latina women earning 56 cents for every dollar earned by a Caucasian man. The Washington Post reported that of 7.2 million women working in the retail industry, 1.3 million of them live in or near poverty. The availability of maternal and paternal leave and quality childcare are among the worst in the advanced economies. This helps explain why many women have been at the forefront of struggling against income inequality and for a $15 minimum wage. The struggle for a living wage should be connected to unionizing workplaces and in particular the service sector. This is a tangible way to deal with the wage gap and should be fought for alongside men, unions and women’s organizations.

However, some things have changed significantly. Women are less and less prepared to put up with ongoing oppression and discrimination. The anger is boiling and whenever a serious protest is developing, a vibrant layer of young and angry women is taking it up. And women – together with men – are fighting back against a series of attacks and provocations by the right.

Attacks on abortion rights over the past decade have been on a state by state basis. The right wing was not able to overturn Roe v. Wade altogether so it has sought to dismantle abortion rights state by state and law by law. In 2013, over 70 anti-abortion provisions were passed in various states across the country. In 2014, the right wing has become bolder and is attempting to attack abortion rights on the federal level. For example, in the Hobby Lobby decision, the Supreme Court ruled that corporations with religious owners cannot be required to pay for insurance coverage of contraception.

The attacks have been particularly intense in the South. The fight over the new Texas law which would effectively close 33 of the 40 abortion clinics in the state is just the latest example of new abortion restrictions. This would mean that someone in Texas would need to drive on average three hours to get an abortion. Democrat Wendy Davis was heralded for her filibuster that blocked the law for a time.  However it wasn’t Wendy that stopped it or kept the right in check, it was the thousand plus people that occupied the state house and made it impossible for the right to proceed. This points to the need for social struggle to defend and extend women’s rights. The women’s movement needs to begin the process of building a national struggle to fight against any anti-abortion legislation that has been passed and for a single payer healthcare system. Corporations should not have a say over women’s bodies and medical procedures. This should be connected to the fight for living wage jobs so that women are not forced to choose against having children for economic reasons.

Over the past few years there has been a growing resistance to sexism and violence against women. These include: the huge SlutWalks in 2011; the exposure of rampant sexual harassment and violence in the armed forces; #YesAllWomen protests over the summer; the outrage over the cover-up of domestic abuse in the NFL; and the evolving movement of young women against the cover-up of the rape crisis on college campuses. Our society is rotten with rape jokes, slut shaming and victim blaming. This growing movement, together with explosions of anger on the campuses, has played a direct role in the passing of the “Yes Means Yes” law in California, which is an important step forward.

The Broader Fight for Equality

This shows the necessity of struggle to win even basic reform. But the broader question is how to build a movement that can take up all the issues that face women in this society.

There is a strong desire to see society no longer dominated by old, wealthy white men which gives the idea of a woman president great appeal. Unfortunately, it is Hillary Clinton, as of now, who is the most likely female candidate in 2016.

Hillary Clinton has been entrenched in corporate politics for decades with ties to the largest corporations in the world including Boeing, Goldman Sachs and Walmart. She’s part of the corporate club – not a tool to end their agenda. Any real fight for women’s equality will come up against the resistance of corporate America, which will not accept changes that affect their bottom line. This is why we need to build a mass women’s movement independent of both corporate parties linked to a new political force representing the interests of the 99% against the 1%.

The Democrats want women to believe that the way to defend their rights is to vote for them. It is certainly true that right-wing Republicans have been the main force attacking women’s rights in recent times. Yet the Democrats have singularly failed to stop these vicious attacks.

Contrast Clinton with RoseAnn DeMoro, the head of the female dominated National Nurses United, who exposed the lack of any protocol to protect nurses and other health care workers at the Dallas hospital with the first case of Ebola on American soil. Also, consider Seattle Council Member Kshama Sawant, who played a key role in the fight to win a $15 minimum wage which disproportionately benefits women workers. These examples show how rebuilding a fighting movement of working people, comprised of women and men, is crucial to the broader fight for women’s rights.

Socialism and the Fight for Women’s Equality

The struggles for equality cannot be limited the ideas of liberal feminists. They focus on how women can make gains within the capitalist system. They believe their goals can be achieved by continually lobbying the Democratic Party. For some liberal feminists “equality” seems to boil down to the equal ability of women to rise through the ranks of society to oppress others. The liberal feminist approach partially explains why some women that don’t consider themselves feminists at all. They believe that there is nothing more to “complain” about. This in no way addresses the situation facing working class women. Socialists see women’s oppression as directly bound up with the capitalist system where there are profits to be made in all aspects of women’s lives: from buying beauty supplies and exploiting women’s bodies in advertising, to the lack of childcare and living wage jobs. The system is not structured to benefit women but to exploit them in the endless drive for profit. In her book, It Doesn’t Have to Be Like This: Women and the Struggle for Socialism, Christine Thomas discusses the need for socialism and why we need not just reforms but a total transformation of society. “Underpinned by inequality, exploitation and oppression, capitalism is incapable of bringing about the liberation of women. While it is possible to fight for and win some improvements in women’s’ lives, the underlying crisis of the capitalist system means that those gains are limited and constantly under attack. Real liberation, therefore, cannot be achieved through a gradual, piecemeal transformation of the current system but requires a revolutionary change in the way that society is organized and structured. Because of the double oppression which they experience under capitalism, both as women and as workers, working-class women have a particular interest in changing society.”  This means women’s organizations, unions, community activists and individuals must fight together against women’s oppression and take on the capitalist system as a whole. Only then we can we create a society that works in the interests of all people and not just for the will and needs of the corporate elite.