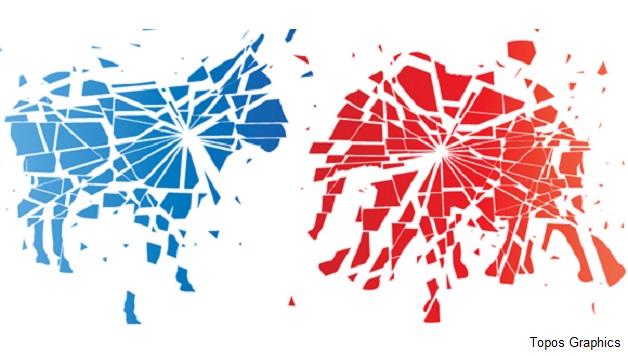 The threat of Republicans taking control of the US Senate does not reflect a shift to the right, but the huge disappointment with Democrats. Meanwhile the response being received by genuine left candidates like Howie Hawkins in New York State and Jess Spear in Washington State shows the search of working class people for a genuine voice for the 99 percent.

Unbearable levels of student debt, sky-rocketing rents, low-wage jobs without benefits, lack of quality public transport, escalating environmental destruction, rampant racism and sexism. These are only some of the crucial issues facing young people, workers and the poor. Yet neither major party is offering any real answers – no wonder voters say they are fed up with them.

In the mid-terms elections, the Republican Party has been honing its message around an agenda of fear. ISIS, terrorism, and Ebola are now seemingly only one border crossing away from plaguing America. One Republican leader after another has blurted out ever more crass ways to threaten the public with unspeakable evils crossing the US-Mexican border. Attempts to equate Ebola with Obama demonstrate the willingness of Republicans to ramp up fear-mongering to confuse the public into voting for their pro-Wall Street, anti-immigrant, anti-poor agenda.

In a rational world this should be a topic for late-night comedy shows. But, with the Democrats unable to offer a real alternative for working people, the Republicans could gain ground in these elections! Instead, the Democrats’ main message is also one of fear – fear of bringing Republicans back into power. No wonder opinion polls show public support for both parties is at a historic low. A recent  New York Times/CBS News poll, found just 5 percent of voters thought most members of Congress deserved re-election. 87 percent said it was time for new people.

The Republicans are ever more exposed as a political party that represents the elite 1%, especially among young people and working people. Yet, they, like the Democrats, need to manipulate a section of the broader public to vote for them to get into power. Republicans have built their political base among small business people, conservative Christian fundamentalists, Tea Partiers and libertarians and a section of older, socially conservative white workers. But growing numbers of their political base have become disgusted at the willingness of Republicans, when in power, to drop their concerns in favor of the elite 1% and big business. In a number of midterm key races, right-wing third-party candidates are challenging Republican candidates.

But despite the lack of general enthusiasm for the Republicans they are expected to make gains in these mid-term Congressional elections. In particular it looks possible that they could gain control of the Senate. In this case the media will begin a hue and cry that  the country is moving to the right. We reject this. Instead, a victory by Republicans will demonstrate once again how anger and disappointment with the Democrats opens the door for the return of Republicans.

In fact the way the Republicans are making ever more naked appeals to the conservative base will make it even more difficult in the medium term for them to win national presidential elections. It is also worth pointing out that  while the Senate may come under Republican control, some of the most reactionary governors elected in 2010, like Scott Walker in Wisconsin, Sam Brownback in Kansas and Rick Snyder in Michigan, may not be re-elected, reflecting the widespread rejection of the vicious anti-working class policies they have implemented.

We are not oblivious to the threat from the right. But we would also point out that anger at Republican and Tea Party gains in 2010 propelled the revolt of workers and students in Wisconsin and the birth of the Occupy Wall Street in 2011. The last few years have seen the beginning of fight back on left progressive issues. Republican gains can result in increased urgency in on-going struggles for a $15 minimum wage, against racism and against climate change, etc.

While there is huge disillusionment with the Democrats, there is still an understandable tendency for many workers to see them as the “lesser evil.” Unlike Republicans, Democrats talk nicely about raising the minimum wage, promising immigration “reform”, fighting for women’s rights, opposing racism and imperialist wars, and addressing climate change.

Yet, look at the Obama administration’s record on each of these issues. Either Obama has done nothing or in many cases he has made things worse. Since 2008, there have been a record number of deportations, an approval of drilling in the Arctic, a stunning evisceration of civil rights and liberties, a normalization of the use of drones abroad resulting in 2,400 deaths, and further imperialist wars. This is to say nothing of the role of many Democrats at state and local level in implementing massive cuts to social services and education.

The reality is that the public as a whole stands to the left of both parties on almost every issue, sometimes far to the left. Growing anger about inequality, falling living standards, the failure to stop global warming and a host of other issues has increasingly exposed the corporate nature of the Democrats.

The disillusionment with the pro-corporate leadership of the Democrats is fueling support for the emerging populist “Elizabeth Warren wing” of the party. Warren is a very popular Senator from Massachusetts, elected in 2013. Speaking about the Obama administration, Elizabeth Warren states: “They protected Wall Street. Not families who were losing their homes. Not people who lost their jobs. And it happened over and over and over.” Individuals like Elizabeth Warren and New York Mayor Bill de Blasio reflect the growing anger at these openly pro-Wall Street policies; they call for limited measures to address the vast inequality in American society.

In the absence of a genuine left alternative it is very understandable that many progressive working people could turn to the left populists for answers.. While the Warren wing of the party has not been a major player in these mid-terms, it has been supporting a number of more liberal Democratic Party candidates and it is very likely that they will become an important factor in the run-up to the 2016 presidential elections.

While socialists would support every policy that improve the lives of working people, unlike the populists we don’t see the Democrats as an empty vessel which can be filled with progressive ideas. Democrats did provide some reforms in the 1960s and 1970s. But these were never offered out of the goodness of their heart.

It was mass struggles which convulsed society on racist discrimination against African Americans, the Vietnam War, discrimination against women and environmental pollution that shifted policies in Washington. There was also a surge of wildcat labor strikes. To get elected, both parties were forced to respond to this massive pressure.

In addition capitalism in the US had just come of a period of strong growth from the 1950s to the mid-1970s. High profits and a dominant world position allowed US capitalism to be able to temporarily afford reforms. This was the basis for increased living standards and talk of the American Dream.

Starting in the late 1970s big business abandoned the postwar policies of “structural reform”, and pressured both its parties to move to the right. Despite empty promises before gaining office, every Democratic Party president since Jimmy Carter has pushed the pro-corporate neo-liberal policies demanded by big business. The subsequent savaging of living standards of American workers has fractured the basis for political stability in the US. With both major parties committed to capitalism, they can only offer broken promises to an angry public.

The leadership of the Democratic Party serves the interests of the 1% and capitalism, not any sense of fairness for the 99%. The idea that Warren and the populists can win the Democratic Party over to their ideas is ultimately a pipedream.  While they may shift the language used by the Democratic Party, resulting in more progressive-sounding promises and in a few cases limited reforms, the Democrats will not deliver real change. Instead, once again they will disillusion voters who are attracted by their promises.

Socialist Alternative calls for a break from both main corporate parties. We call for independent left candidates to run as a step to forming a new political a party of the working class. The election of Kshama Sawant in Seattle in 2013 and the dramatic support for Howie Hawkins, Green Party candidate for governor in New York, and Jess Spear, Socialist Alternative candidate for the Washington State House, demonstrates the huge potential that exists. for candidates with bold, genuinely left  policies like a $15 an hour minimum wage, major taxes on the 1% and big business and public ownership of the big oil and energy companies, and a massive program of green jobs to create jobs and rebuild the economy based on green energy. To quote Kshama Sawant:

“This momentum needs to be built upon. The activists coming around these campaigns need to stay organized to struggle for wage increases, against racist policing and for quality housing while also proclaiming, as Socialist Alternative did in Ferguson and St. Louis, that ‘the whole system is guilty.’

“We also need to do more than just take up worthy causes at the local level. These campaigns are the tremors under the surface of society from massive inequality, and we need to turn this into a political earthquake that shakes the ruling class to its foundations. We need to bring these campaigns together and have the maximum effect on the national political discussion.”

#DemExit: Time to Launch a New Party Of, By, and For Working People

Super Tuesday Aftermath: The War Is On Between The Establishment and The Left

Coronavirus and the Profiteering of Big Pharma

WorkersSpeakOut: Walmart Janitor: my manager told me not to clean the staff room