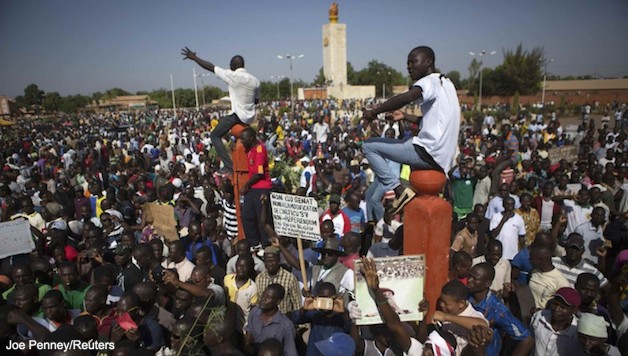 No to military rule! Continue mass struggle – the whole rotten system must go!

After 27 years in power, Blaise Compaoré was planning to die in his presidential chair. But the events of recent days have changed everything in Burkina Faso, one of the world’s poorest countries. Since the ‘Arab Spring’, youth in the western African country have questioned the ruling elite and tested the regime by protesting against it. Faced with the possibility of a parliamentary vote for the reform of the country’s Constitution – which would have allowed Compaoré to seek re-election three more times – deep anger enveloped the masses and a popular uprising broke out this week.

Compaoré retreated to his last bastions of support and exhausted all efforts to hold on to power. He declared a state of emergency after protesters stormed parliament and burnt other state buildings. Protesters were shot dead or injured by state forces but the demonstrations continued. On 30 October, Compaoré was forced to say he would discuss setting up a ‘transitional government’ with the opposition, at the end of which he would hand over power. But the dye was cast and Compaoré was forced to resign on 31 October. In a statement, Compaore said the presidency was “vacant” and he called for elections within 90 days.

The head of the military, General Honore Traore, said he had taken over as head of state “in line with constitutional measures”. The news of Compaoré’s resignation saw crowds celebrating in the capital, Ouagadougou. The long years of the Compaoré’s dictatorship – a close ally of US and French imperialism – are over but the question still remains of what alternative will follow his departure.

The departure of Compaoré is very welcome but only a beginning. Without the construction of a genuine mass alternative, a ‘transitional regime’, under the control of the army, is likely to be posed. This may be followed by elections in which most attention will be focused on opposition figure, Zephyrinus Diabré, the alternative pawn of Western imperialism in Burkina Faso.

The movement should not stop at the demand of Compaoré’s departure. All the ills that afflict society – unemployment, lack of housing, high prices, underdevelopment, etc – will continue under any pro-capitalist successor.

No trust in false ‘opposition’!

The masses of Burkina Faso cannot have any trust in false opposition politicians or in the so-called “benevolence” of the high military staff. Many demonstrators correctly regard General Traore – formerly Compaore’s aide de camp – as no real change.

To ensure the permanence of the struggle and its control from below, it is urgent to build popular committees in the neighbourhoods, to begin the revolutionary reorganization of society not only politically but also economically. These committees should be aimed at defending the mass movement against attacks by troops on the payroll of the ex-dictator or the forces of the new rulers, who would be prepared to drown the protests in blood if they felt their vital interests were under serious threat.

The rank-and-file soldiers of the army must be split away from the ruling system. Soldiers can be won to the movement by creating democratic committees of soldiers, responsible to elect their own officers.

Any anti-democratic “military transition” needs to be opposed and for the call to go out for the convening of a revolutionary constituent assembly composed of delegates from all parts of the country, elected by popular assemblies, so that the people can decide for themselves about their future. For the establishment of a ‘republic of the poor’, a government of workers, youth and the masses! This would see the nationalization of the key sectors of the economy, under the democratic control of elected representatives of workers, young people and the poor, subject to recall, at any time and receiving no material privileges. A workers’ government would see a planned economy, democratically run according to the needs of the majority.

Finally, the movement should not be limited to Burkina Faso: the departure of Compaoré, the “gendarme of West Africa”, will have an impact across the continent and open the door to protest movements throughout Africa.

The grassroots movement ‘Balai citoyen’ (Citizen’s Broom), which reportedly played a heroic role in this struggle, so far, must not make any concessions to the generals nor to the various pro-capitalist parties who are manoeuvring to take power.

The mass uprising shows the potential for a new political organization, a new party for workers, the poor and young people. Building a strong, independent alternative for the masses will be essential for their struggle not to be hijacked by the forces of “democratic” capitalist reaction and to ensure, on the contrary, the continuation and deepening of the revolutionary struggle to fully satisfy the masses’ demands.

Coronavirus in Africa: Capitalism Driving a Continent Into the Abyss

Stop the Massacres in Eastern Congo!