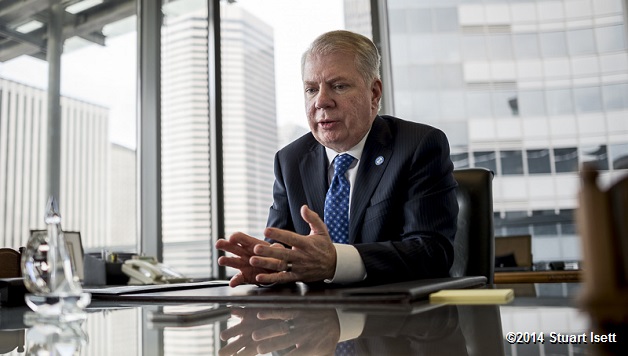 A budget is the clearest statement of the politics and priorities of the government. Seattle Mayor Murray’s proposed budget is a continuation of previous City of Seattle budgets with only small changes at the margins. The results of these previous budgets are clear: a housing crisis, a shocking growth in homelessness, drastic underfunding of social services, an inadequate public transit system, and growing income, gender and racial inequality.

This status quo does not serve the vast majority of the people of Seattle, but it is working very well for the big real estate developers and downtown business interests who are reaping record profits.

Mayor Murray promises to prioritize “human services, public safety and transportation” in his budget. Yet his actual budget proposals are far from delivering on such laudable promises. While it has some positive initiatives, Murray’s budget overwhelmingly reflects the domination of wealthy interests over Seattle’s government.

The budget does not address the shortage of affordable housing, only kicking the can down the road by establishing another “Advisory Committee” dominated by the developers and politicians who caused this crisis over the last few decades.

It accepts a continuation of the social conditions which have led to increased crime and anti-social behavior throughout our city. While Murray talks of improving public safety, he continues to dramatically underfund critical human and social services and does not address the gentrification displacing existing communities and undermining the social cohesion which is essential for healthy, safe neighborhoods.

Nor does the budget address the huge and growing danger of oil and coal trains running through the city – an issue of public safety as well as climate change.

It is true, as Murray says, that the city’s current revenue does not match its needs. The state government in Olympia has placed many right-wing restrictions on cities’ taxing powers. But Murray’s proposed budget ignores potential options under existing law for taxing the wealthy and large corporations such as a millionaire tax, a major increase in fees on developers, an employer “head tax,” an increased tax on commercial parking lot owners, and “excise taxes” on banks, big box retailers, and mansions. Murray could also generate millions in savings by reining in excessive compensation to city government executives and cutting funding for unneeded vanity projects and handouts to developers.

It is clear the establishment which runs Seattle is unwilling to take such steps. They fully accept the existing framework which underfunds our needs in the interests of the richest 1%.  To make fundamental change – to access the huge wealth and resources of our city and country – we need to build powerful campaigns to demand structural changes in Olympia and DC to fully fund the needs of the 99%.

For example, what is the answer of the Mayor and City Council to the dismal failure of the capitalist market to provide affordable housing for the 99%? More of the same! Give the corporations and developers what they want – that’s the credo of all the corporate politicians.

That is why to win real, fundamental change we need powerful movements of working people, especially our unions and community organizations, and to develop our own political representation independent of the two parties of big business.

While Murray celebrates the passage of a $15/hour minimum wage, his budget shockingly fails to deliver on his first promise as Mayor to immediately raise the wages of all city government employees to a minimum of $15. Hundreds of Seattle government employees are still working for poverty wages less than $15. Yet the money to fulfill this promise could be created in the city’s budget by simply capping the pay of top city executives at $150,000/year as Councilmember Kshama Sawant is calling for.

City Councilmembers pay themselves $120,000/year, the second highest salary for any city council in the country! The Mayor is paid over $180,000/year. While homelessness is growing and human services are under-funded, it is outrageous to prioritize paying the City Council and Mayor such inflated salaries.

Councilmember Sawant proposes to cut the salaries of each of the Councilmembers and the Mayor by $50,000, which would generate $500,000/year for emergency services needed to address the city’s homeless crisis. This would also provide a side benefit of bringing the city politicians’ pay more in line with the majority of Seattle so they can understand the problems faced by the 99%.  Currently Kshama Sawant is the only councilmember who accepts only the average worker’s wage and donates the rest of her $120,000 salary to building social justice movements.

Seattle has a severe crisis of affordable housing. Private developers have created this situation and are clearly not going to solve it. The city government needs to step in and address this pressing need.

In September King County Metro Transit carried out a new round of cuts in service to an already significantly reduced public transit system after 5 years of cuts and fare hikes. Leaving aside the crisis of climate change, a growing and livable city requires a major expansion of public transit and a reduction in traffic.

The passage of Proposition 1 on November 4 to provide additional Seattle funding for Metro will be a step forward, but the city can go further by implementing a business “head tax” and tax on commercial parking lot owners – as Councilmembers Sawant and Licata proposed earlier this year. This could be used to expand late night “owl” service, which is currently extremely limited and is especially important for women, swing shift workers, and would strengthen public safety.

Ordinary people face a growth in crime and anti-social behavior, while LGBT people and people of color have seen a growth in hate crimes. This cannot be solved by simply adding more police and arresting more people.

A real plan would start with fully funding essential human and social services, including full access to mental health services, an end to homelessness, an expansion of community and youth centers, embedding social workers in troubled neighborhoods, and job programs.

We need a halt to out of control gentrification which is displacing communities and undermining the social cohesion which is essential for healthy and safe neighborhoods. Key is empowering communities to organize night watches, as well as providing regular public transit service for late night bus service. We also need to address the justified lack of trust in the police by carrying out systematic reform of the SPD to put a stop to police brutality and ensure democratic control and accountability over the police.

Furthermore, this budget ignores the huge and growing danger of oil and coal trains running through the city – an issue of public safety and climate change.

We Need a People’s Budget

While Mayor Murray’s proposed budget has marginal changes from previous year’s budgets, 99% is a continuation of previous budgets which have served the 1% so well.

A completely different approach is needed. We need to challenge the cozy club of establishment politicians and the Chamber of Commerce who have been running our city for way too long. We need a budget that puts the needs of the people first and starts with bottom up discussions among unions, progressive organizations, and in our communities and neighborhoods.

Socialist Alternative member Kshama Sawant got elected last November to the City Council. She has shown herself to be the only councilmember willing to fight consistently for working people’s interests and use her position to build support and strengthen movements from below.

This is the model that is needed to fundamentally change the priorities in the city. Kshama Sawant will speak out for the 99% in this budget season – but to achieve more, it needs the active involvement of working class people through protests and more. More candidates independent of big business and the Democratic Party establishment in next year ́s council elections are needed as a step towards a mass party that gives the 99% a voice. That ́s what Kshama Sawant and Socialist Alternative are building for.

Join us in fighting for every single improvement we can win in this budget, linked to building a movement for a fundamental change in the priorities of this city.