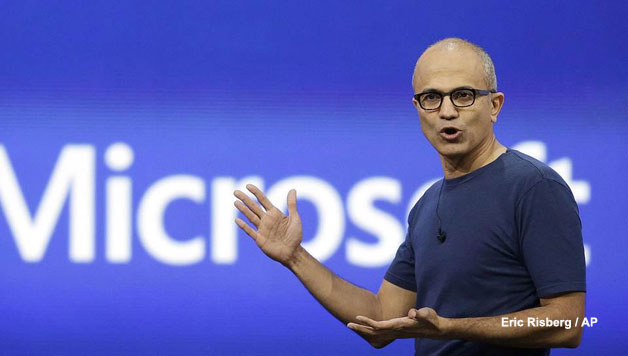 This article was originally published on Crosscut.com

On Thursday, Microsoft CEO Satya Nadella said that for women, “it’s not really about asking for the raise, but knowing and having faith that the system will actually give you the right raises as you go along. … Because that’s good karma.” This viewpoint is not unique to Nadella. It is representative of corporate culture all over the world. CEOs do not want employees to ask for raises, they want to maximize the profits for billionaire shareholders. That means minimizing labor costs by whatever means necessary — including gender, race and age-based discrimination.

It is not karma that has oppressed women in India, where Nadella and I are from — it is the domination of the wealthy classes, in a system where subjugating women is a convenient way of subjugating the working class as a whole. Women in India have made strides in the last several decades on several fronts: the fight against sexual violence, oppression in the workplace, the right to reproductive freedom, and political representation, to name a few. But each of these victories was won on their own courage and determination, through mass marches, demonstrations and civil disobedience, sustained over decades despite fierce opposition in the form of ridicule, violence and systematic attacks by the pro-corporate government. This progress is not the result of karma, and certainly not the benevolence of the bosses or the political establishment. We need that kind of courage to build powerful movements to end women’s’ oppression everywhere.

It is also not enough to talk about equality in relatively well-paid careers for women with advanced degrees. Of course, women in all income brackets deserve to be paid the same as their male counterparts. But discrimination occurs not just in pay discrepancies between men and women in the same field, but in the way the genders are represented across industries. Gender segregation by industry is still very entrenched in our society. Primary education, health services and social services are all sectors in which women make up a strong majority of the workforce. Practically all fields where women make up the majority of the workforce are low-paid fields.

Women should not be asking but demanding equality in the workplace. The most effective ways of doing that are to fight for unionization and engaging in political struggle. Being in a union has been shown to raise women’s wages by over 11 percent, and it’s better than a college degree when it comes to the likelihood of having health insurance.

We need to build a new women’s movement. Look at what we just accomplished in Seattle. Winning the $15 an hour minimum wage in Seattle will go a long way in improving women’s’ living standards in Seattle. This city is wealthy, yet income inequality is increasing. As The Seattle Times reported just this week, life for the top 20 percent is bliss. For the rest of us, living standards have declined as a result of rising rents and increased poverty. This is affecting women the most.

The victory for $15/hour in Seattle was won by work, not by the corporate bosses and politicians who represent them. On the contrary, nearly all City Councilmembers who pay lip service to women’s issues voted for corporate loopholes in the $15/hour ordinance. We saw this most clearly when councilmembers approved a tip penalty, an insidious idea that greatly worsens the gender pay gap in the food industry and makes women workers more vulnerable to sexual harassment. This clearly demonstrates the need for independent political representation not tied to big business through campaign contributions or cozy relationships with lobbyists.

Women have been on the forefront of the leadership of every successful social movement. Some of the most marginalized and politically neglected immigrant women are currently leading the struggle against the Seattle Housing Authority’s “Stepping Forward” plan to increase rents on affordable housing tenants by 430 percent over the next six years. Their courage and their will to fight back provide an inspiration for all women in this country and around the world.

You can support their struggle. Help us build a new women’s movement against corporate exploitation and for a world where the basic needs of all people are met, regardless of gender, race, ability, sexual orientation or country of origin.