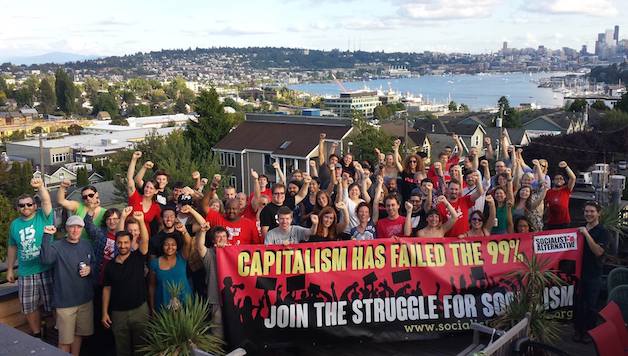 It was a fever pitch as the largest-ever Socialist Alternative National Convention met for three days this past Labor Day weekend in Seattle. The National Convention is the highest decision-making body of the organization, convened at least every two years to not only analyze key economic, social, and political developments but to collectively decide how  best to build Socialist Alternative and the broader movement.

The convention began with a discussion on international developments introduced by Peter Taaffe, of the Committee for a Workers International (CWI), the grouping of socialist organizations and parties in 40 countries with whom Socialist Alternative stands in political solidarity. We discussed the prolonged structural crisis of capitalism and the chaos and upheaval this is creating around the world. Attention was given to the increasing difficulties being confronted by U.S. imperialism around the world, and especially in the Middle East.

Where is the U.S. Going?

The bulk of the rest of the first day was taken up with a discussion of perspectives for the United States over the next period. A major feature of the discussion was the range of social struggles now emerging across the country. For example, there were eyewitness reports from the rebellion in Ferguson, as well as speakers on the growing national fight against income inequality, spurred on by the victorious achievement of a $15 minimum wage in Seattle.

The largest part of the discussion focused on how the general shift to the left in  the U.S., especially among young people, and the massive disillusionment with corporate politics. Delegates discussed the implications of a possible race of Bernie Sanders for president and of Karen Lewis for mayor of Chicago. These paramount discussions concluded with a series of votes, with members from around the country agreeing on the most important issues for Socialist Alternative.

We took stock of the organization’s explosive growth, having doubled in size in the past 10 months. Our goal is to grow by another 50% by the end of 2014 and to consolidate our presence in a range of new areas while moving to a monthly paper (see below). Delegates agreed that, for us, a critical task is to defend the beachhead for genuine left politics which has been achieved in Seattle through the election of Kshama Sawant.

The tremendous commitment and enthusiasm of the convention was reflected in the record-setting financial appeal, which netted $43,000 in pledges, increased dues, and one-time donations.

The final day featured the adoption of a new constitution, the election of a new National Committee, and a report on the work of the CWI – a brilliant note to end upon. The potential for building socialist forces worldwide was like a shock of electricity to the spirit of those in attendance, which they can take back into local Socialist Alternative groups across the U.S.