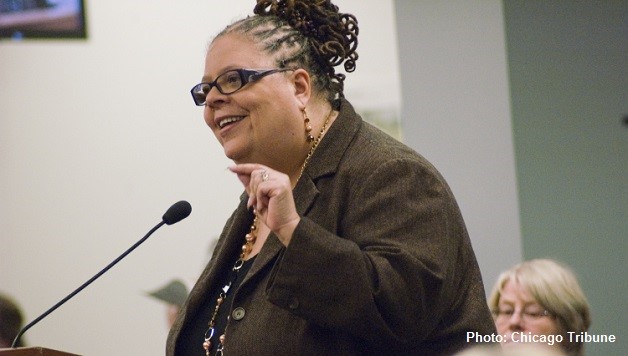 Karen Lewis for Mayor of Chicago?

Discussion about campaigns of the 99% against the corporate domination of both parties has picked up in recent weeks. This is a welcome development for socialists, community activists, union organizers, environmentalists, anti-racists and those campaigning for a $15 an hour minimum wage. The Democrats have failed us, and we need an alternative.

Karen Lewis, President of the Chicago Teachers Union, is considering a run against the pro-corporate, union-busting Democratic Party Mayor Rahm Emmanuel. Lewis, a proponent of “bottom-up” union activity, has led actions and even a strike against Emmanuel’s administration. Lewis can inspire a base in both the unions and the African-American community. Amazingly, polls indicate that she would defeat Emmanuel by nine percentage points if the election was held today.

This can ignite a discussion about how to organize when Democrats disappoint progressives and union activists. It is also important that Lewis comes out of the labor movement and the black community. We would strongly urge that Karen Lewis run independently of the Democrats. In this way, her campaign could be a step toward what is really needed: a new party of working people.

If Lewis ran as a Democrat, then she would be more prone to pressure from big developers and the super-rich. A Democratic Party candidacy would also fail to push forward the labor movement to fight in its own interests by running independent candidates against the local governments that are cutting budgets and attacking unions.

There is a massive vacuum on the left of U.S. politics. Poll after poll shows that the millionaires in Congress are out of touch with the concerns of workers, immigrants, African-Americans, and young people.

Most people are in favor of guaranteed living-wage jobs, against military adventures abroad, and want a political alternative to the two parties. The system is stacked against working-class people, with corporations pouring millions into the political process while politicians and judges provide a host of laws that make it difficult for ordinary folks to assert themselves in elections. Still, it is possible to defeat the big business agenda with a strong organization, a clear program, and a determined campaign.

Last year, Socialist Alternative showed that the establishment can be defeated by getting Kshama Sawant elected, with over 90,000 votes, to Seattle’s City Council as an open socialist. We also nearly won another City Council campaign, with Ty Moore running in Minneapolis. After Kshama was elected, she used her platform to build struggles of working people, including the successful movement for a $15 an hour minimum wage.

Inspired by Socialist Alternative’s campaigns last year, many other left-wing activists are stepping up to challenge the two parties of Wall Street.

Socialist Alternative is again running a candidate in Washington state, with Jess Spear challenging Frank Chopp, the pro-corporate leader of the state legislature with the most regressive tax system and biggest corporate handouts anywhere in the country. See page four for more about this campaign.

More left candidates have come onto the scene this year than at any time in recent memory, from Jorge Mujica in Chicago to Howie Hawkins in New York, and Dan Siegel in Oakland to Eugene Puryear in Washington, D.C.

None of these candidacies will have the nationwide and movement-building implications of Sawant’s victory last year. Still, this step forward can be important toward building the confidence of working people to step into the political arena.

If Karen Lewis declared a campaign now for Chicago mayor now, independent of the Democrats and corporate money, then the political discussion in this country could be shifted significantly to the left in the aftermath of the midterm elections. The election is in June, and a victory would give massive confidence to labor movement activists and working-class people in general to challenge “politics as usual.”

To really take on big business and win, we need to motivate and mobilize masses of working-class people. This process is not simply electoral. The strikes of fast-food workers and the protests against environmental destruction this fall will play important parts in building the consciousness and organization of workers and youth. To defeat big business and their political servants, we need to provide a vision of society without exploitation and war. More than that, we need a program that can move people into action now and link this to the fundamental transformation of society. Socialist Alternative’s campaigns have been unique in connecting this approach to a tightly knit organization with clear ideas and links to the labor movement and community groups.

Since Occupy was driven from city parks across the country through coordinated police attacks, Socialist Alternative argued to bring Occupy’s message and determined struggle to working-class communities. When we were able to, we did exemplary work in trying to show how this could be done, with Occupy Homes defending homeowners against big bank and police evictions. Likewise, we brought the message of the 99% to the electoral arena.

We called for 200 independent Occupy candidates in 2012 to give a sense of what was possible, to call on people to take a clear position against the Democrats, and to provoke debate with the “anti-politics” elements in Occupy. This call reflected the vacuum that existed, and we proved the possibilities for independent working-class politics with Sawant’s victory.

Elections, while stacked against working people, are also looked upon as a key part of politics in the U.S. This provides an important platform for struggles against the injustices of the capitalist system. Socialists need to use this organizing opportunity to engage with working-class people, build the general fight-back against corporate domination, and expand the forces of the socialist movement. Election campaigns can sometimes play an important role, offering a protest vote to educate thousands of workers, providing an alternative and establishing an initial base of support. Still, with the limited resources of a small socialist movement in the U.S., it is best to focus on the campaigns that can make the biggest impact.

However, we are not an organization that exists for the sole purpose of running candidates. We seek to build movements of the 99%, articulate a way forward to victory, and deepen the influence of socialist ideas in the labor movement. We also aim to educate new generations of young people in the history of the struggles to overthrow capitalism internationally. Elections are only one small facet of how we can raise consciousness, mobilize, and educate working people moving into action.

The momentum of having over a dozen serious independent left campaigns needs to be built upon. Socialist Alternative supports these electoral efforts, but we need plans to go further.

The left needs to use debate around what Bernie Sanders should do in his planned presidential run to put forward the need for a mass working-class alternative to capitalist domination. We can engage with a far larger audience that just the existing activists in a discussion about how to have the strongest left challenge in the presidential race of 2016.

These campaigns can be important steps toward what is really needed: a mass party of working-class people that campaigns not only in elections but in the streets, workplaces, campuses, and communities against the injustices of capitalism. A new party would not just be a combination of existing small left groups; it would reflect thousands of new activists stepping into struggle. A new workers’ party will become viable when a section of the Democrats’ working-class voting base begins to support a left alternative.

An independent Karen Lewis campaign would be a huge step toward both inspiring left campaigns and rebuilding the labor movement.