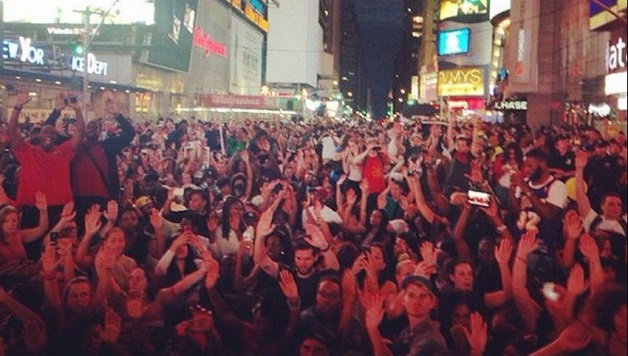 “YOU took my son away from me. YOU know how hard it was for me to get him to stay in school and graduate?! YOU know how many black men graduate?! NOT MANY! … cause you bring them down to this type of level, where they feel like I ain’t got nothing to live for ANYWAY. They going to try to take me out ANYWAY.”

On August 9, an unarmed teenager and college-bound student, Michael Brown, was killed by a police officer in Ferguson, Missouri. Beginning with an order from the police officer to Brown to get on the sidewalk, shortly thereafter a shot was fired. According to eyewitnesses, Brown raised his hands in the air to exhibit to police that he wasn’t a threat; yet gunfire from the officer continued, killing Brown instantly.  As his body lay on the pavement, the community of Ferguson exploded in righteous indignation and anger at the naked violence of the police.

The seething rage at the killing of Brown by the community was evident Sunday night as people marched to the police station, with some engaged in looting and throwing bottles. This has been followed by mass – and overwhelmingly peaceful – protests. Several eyewitnesses have spoken out against the disputed police account that Brown was attempting to take the police officer’s gun.

These protests have been met by increased repression: a militarized police force using tear gas, rubber bullets and ongoing provocations like an officer calling the people “animals.” The police have created a virtual war zone and have increasingly attempted to shut down media coverage. Reporters have been made targets, including the arrest of two reporters from The Washington Post and Huffington Post, and the throwing of tear gas at Al Jazeera journalists. Police also shot a Ferguson protester on Wednesday.

We in Socialist Alternative demand an immediate withdrawal of police. We also demand a full and thorough investigation by independent forces, including representatives of African American organizations, trade unions and the wider community, to expose the conditions of this brutal killing as well as the repression of the protests. The entire police force must be put under public scrutiny, including the officer responsible for the shooting.

Given the government’s failure to address these problems, the only way to achieve a genuine, independent investigation and to systematically address the roots of police violence and deep racial and economic inequality is to spread the protests and demonstrations all around the country. This will require the coming together of community and workers organizations in new, grassroots organizations to build and coordinate the protest movement against racist police violence.

“Until the killing of black men, black mothers’ sons, becomes as important to the rest of the country as the killing of a white mother’s son, we who believe in freedom cannot rest…”

How many more? How many more must die at the hands of police or extra-judicial violence? Michael Brown joins the long list of working-class and poor people, particularly black and brown youth, whose lives have been violently taken in this racist capitalist society that has rendered black and brown life disposable and unworthy of respect and dignity. How can we put an end to this deepening crisis our youth face of systemic poverty, police violence, brutal racism, and mass incarceration?

Michael Brown’s only “crime” was being black and poor as he walked to his grandmother’s home in Ferguson, a suburb of St. Louis. Ferguson is 70% black with a predominately white police force. In a population of 21,000, a quarter of the residents live below the poverty line. In some of the surrounding areas, poverty is as high as 40%. Unemployment and low-wage work predominate. The median household income in the district that borders the scene of the crime is only $14,390/year.

A report from the Missourians to End Poverty coalition released earlier this year shows that poverty in St. Louis itself increased from 27.2% in 2011 to 29.3% in 2014. Roughly one million Missourians are impoverished, out of a total population of just over 6 million.

In Ferguson and many other cities in the U.S., for workers and people of color, the police are viewed like an occupying army, not unlike in Iraq or Gaza. For years racial tensions have been boiling over. A 2013 report by the Missouri attorney general’s office found that Ferguson police stopped and arrested black drivers nearly twice as frequently as white motorists though they were less likely to find contraband among the black drivers.

We Need to Change the System

To put an end to the crisis facing our youth who face systemic racism in this profit-driven, capitalist society, we can’t let this anger dissipate into thin air.

The FBI and Justice department have moved in swiftly to assist the local authorities and begin what they call an investigation. Democratic Party officials have attempted to tamp down the frustration of the community. Unfortunately, the National Association for Advancement of Colored People (NAACP) is not throwing its full weight behind spreading the protests and addressing the root cause of the problem.

These events point to the immediate need for working-class people to work together in building an independent united grassroots movement of workers, youth and people of color – to fight for living wage jobs, housing, health care, education and a living wage for all, as well as an ending police violence and establishing direct democratic community control over public safety. We need to draw the lessons from the Trayvon Martin case: the demonstrations, protest, civil disobedience and strikes need to spread to mount pressure on the police and judicial system to bring justice to the Brown family.

We need to build new mass organizations that will reject the bankrupt politics of Democratic Party, a pro-capitalist politics that accepts the status quo of systemic racism and violence.

“A system cannot fail those it was never meant to protect.”

The deaths of Michael Brown, Eric Garner, Oscar Perez Giron, John Crawford, Renisha McBride and the judicial frame-up of Marissa Alexander are just a few examples of the daily violence, humiliation and discrimination faced by working-class people, youth, and people of color. The underlying function of law enforcement and the prison system within this capitalist society is to defend and maintain massive inequality – to serve and protect the profits, property and prestige of a predominately white male ruling elite. The richest 1% maximize their profits while perpetuating endemic poverty, government neglect, blatant corruption and mass unemployment. In periods of capitalist and social crisis, law enforcement and the ruling elite ramp up their tactics of surveillance and repression to firm up their control of society, out of fear of social explosions against the conditions they’ve created.

As a historical reminder, after the Watts rebellion on August 11, 1965, it was one year later – October 1966 – that the Black Panther Party for Self-Defense in Oakland was born. The Panthers expressed a bold, radical and democratic socialist vision, grounded in a fight against global capitalism and institutional racism. As Malcolm X once stated:

Spread the protests nationwide! Build a unified, grassroots movement to demand transparency, accountability and an end to racist policing and police brutality.