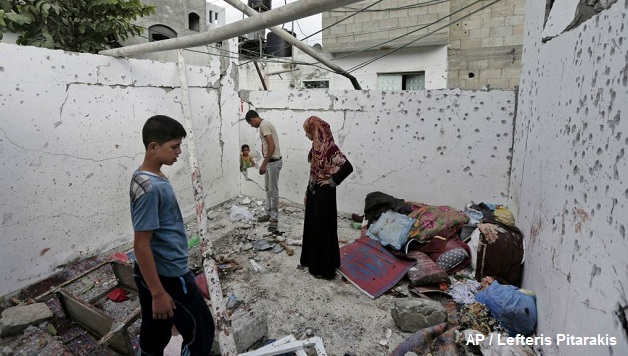 What is the role of imperialism in the conflict?

by Niall Mulholland, from articles in this week’s Socialist (paper of the Socialist Party, England & Wales)

A hail of death has roared down on Gaza for weeks. Working class people in Britain and worldwide are shocked and angered at images of a Palestinian father carrying his dead children’s body parts in a plastic bag, and other daily horrors from the Gaza Strip.

The Palestinian death toll is fast heading towards 2,000, over 80% of them civilians and many of them children, according to the UN. Over 9,000 have been injured. In this one-sided war, 64 Israeli soldiers have also died, along with three Israeli civilians.

Over 460,000 people out of Gaza’s population of 1.8 million have been displaced by the Israeli Defence Force’s (IDF) murderous attacks. Many are forced to live in overcrowded makeshift shelters or with relatives. A third deadly missile attack on a UN school in Rafah, which killed at least ten, shows nowhere can offer protection from the indiscriminate IDF bombardment.

The destruction of infrastructure, leading to a lack of clean water and sanitation, poses the serious risk of the outbreak of diseases. Most of the Gaza Strip exists on less than two hours electricity a day. One third of hospitals and dozens of ambulances have been destroyed. As morgues run out of room, children’s bodies are grotesquely piled up in ice cream freezers.

Huge demonstrations against the onslaught on Gaza and in solidarity with Palestinians have taken place in London and many other parts of Britain and across the world. Despite the one-sided reporting of the BBC and most of the mainstream media – who choose to ignore that the Israeli state is occupying Palestinian land, building illegal settlements and blockading Gaza – public opinion is on the side of the oppressed Palestinians. A majority of young Americans now oppose the Israeli onslaught.

Most people see through the hypocrisy of the Western powers. Ruling elites wring their hands over massacred Palestinians while continuing to supply their ally Israel with arms and funding to continue its deadly war aims.

After announcing that it had destroyed most of Gaza’s tunnels, Israel declared a 72-hour ceasefire on 4 August and pulled back troops to “defensive positions”. It remains to be seen if this ceasefire vanishes like others and the IDF start shelling again. After much bloodletting a ceasefire will eventually come but in conditions of extreme poverty, exploitation and oppression nothing fundamental will be resolved for Palestinians.

The suffering people of Gaza and the Palestinian Authority can only rely on their own resources, in solidarity with working people in the region and internationally, to struggle to win lasting peace and genuine statehood.

New mass struggles against the Israeli state oppressor and desperate social conditions will see Palestinian working people and the poor striving to build their own independent political voice.

And only socialist ideas can end the system that breeds war, terror and poverty for Palestinians and break Israelis from their right-wing leaders who have shown they cannot deliver permanent peace while oppressing Palestinians.

Israel/Palestine and the role of imperialism

As the death toll mounted in Gaza, the Cameron government and other Western powers mouthed empty condolences and called for a “ceasefire”. Under growing public pressure, cracks appeared in the Con-Dem government. Foreign Office minister Baroness Warsi resigned, saying government policy on Gaza was “morally indefensible”.

The UN’s Ban Ki-moon condemned Israel’s Gaza onslaught as a “criminal act” and called for an end to “this madness”. But the UN – dominated as it is by the big imperialist powers – proposes no action for Israel’s flouting of international law, let alone a genuine negotiated settlement to the decades-long crisis.

What is the real role of western imperialism in this bloody conflict? The modern state of Israel was created in 1948, when Jews fled the Nazi Holocaust and persecution to a new ‘homeland’ on what was then Palestine.

As the British imperialist occupation of Palestine ended and the first Arab-Israeli war erupted, the right-wing Zionist leaders carried out the expulsion of hundreds of thousands of Palestinians, using brutal paramilitary methods and ‘terrorism’. Initially the Zionist movement balanced between Western imperialism and the Stalinist Soviet Union to help create Israel. The new ruling class promised a “land of milk and honey” for its people, but have only delivered decades of crises and wars, and in recent years a sharpening divide between rich and poor.

One of the main reasons Israel has been able to survive is because of enormous economic and military aid from US imperialism. It regards Israel as a key client state in the strategically vital and natural resources-rich region. The US arms and finances Israel to the tune of $3 billion a year, creating the fourth strongest army in the world.

After a policy of ‘enforced integration’ of Palestinians under occupation between 1967 and the late 1980s, Israeli policy shifted towards ‘separation’ during the 1987-93 mass Intifada (‘uprising’), when the ruling elite realised they could not rule in the same old way.

After the Oslo Agreement saw the creation of the rump Palestinian Authority (PA) under the pliant rule of Fatah, Israel tightened the screws around Gaza, especially after the 2000-2005 second Intifada and the coming to power of Hamas in 2006. Successive Israeli governments and western powers aimed to remove Hamas from power. The Gaza Strip, the world’s largest open air prison, was effectively sealed shut.

Israel has encouraged splits between Fatah and Hamas. Its huge military assaults on the Gaza Strip in 2008-9 and 2012 were intended to ‘mow the lawn’, ie weaken Hamas and strengthen Israeli power. Israel’s current assault, which started on 6 July, is intended to do the same and to destroy attempts by Hamas and Fatah to reach a ‘reconciliation agreement’.

However Israel’s ferocious military aggression has strengthened Hamas – regarded as the only line of resistance to IDF butchery even by many of its severest critics in Gaza – and put Palestinian rights back centre stage in world politics.

Over the last months, Hamas entered talks with PA president Abbas from a position of growing weakness. It lost support from Syria and Iran after its refusal to give backing to the Assad regime facing an armed rebellion.

Hamas also faces hostility from the Egyptian regime, which bloodily overthrew the previous Muslim Brotherhood government, a close ally of Hamas. This resulted in the “underground tunnel economy” between Egypt and Gaza being systematically dismantled by Egypt and Hamas being unable to pay government employees’ wages.

These developments, compounded by Hamas’s authoritarian rule and failure to show a way out of poverty and national oppression for the Palestinian masses, led to a sharp fall in its support in Gaza. Criticisms of Hamas were understandably muted once the latest IDF onslaught began.

The people of Gaza, of course, have a right to defend themselves but the bouts of rocket fire from Gaza since 6 July reflect the desperation of Palestinians in the Strip. They are no deterrent to the Israeli regime with its crushing military superiority. Moreover indiscriminate rocket attacks on Israeli civilians, carried out by groups that are not under democratic control, are counter-productive; they cause widespread fear among communities in Israel which is ruthlessly exploited by the right-wing Israeli government to deploy even more repression against Palestinians.

The interests and aims of Israel and its Western imperialist backers do not always chime. The Western powers would like to see a long-term agreement between Palestinian and Israeli leaders that leads to, in John Kerry’s words: “two states for two peoples”. Under the watch of imperialism, this would not mean Palestinian liberation but some form of rump Palestinian statelet with a pliant ruling elite.

The Western powers hope this would lead to more stability in the region and safeguard their interests. The corrupt and despotic ruling elites in the Arab states, despite their fake support for Palestinian rights, also fear the establishment of an independent Palestine, dreading that radical developments there could provoke the beginning of the end of their rule.

After both the EU and US indicated they would be prepared to deal with a new Hamas-Fatah regime, Israeli Prime Minister Benyamin Netanyahu, under pressure from his far-right ministers and the powerful settler movement, upped the ante. The 12 June disappearance of three Israeli students in the West Bank was used as justification to start military operations against Gaza and to whip up Israeli fears of Hamas “rocket terrorism” and later “tunnel terrorism”. But the main aim of the Israeli regime was to terrorise the Gazan population and to break Palestinian resistance.

Israel’s neighbours and the region are in turmoil – Syria and Iraq convulsed by civil war, Jordan and Lebanon unstable, Egypt under military domination, Libya torn apart by warlords. So the Israeli state also wanted to display and enforce its military power.

Even if the IDF did eliminate Hamas, other Palestinian armed groups would appear, possibly more ferocious foes like ISIS (the Islamic State).

Netanyahu says the current conflict confirms his argument that ‘security control’ is needed over the West Bank. This implies consolidating the occupation and extinguishing any remaining Palestinian hopes of a two-state solution.

But this policy will only entrench divisions and store up even greater explosions and conflicts. Palestinian numbers are growing in Israel and threaten to become a majority. The Israeli elite could face uprisings in both the West Bank and Israel itself, where the demographic clock ticks on to its disadvantage. The Israeli extreme right will try to counter this process by further enforced population movements or by further stripping rights from Palestinians living in Israel.

Socialists support the right of self-determination for Palestinians and call for the expulsion of imperialism out of the region. But what force can achieve this? Mass struggle by the Palestinians, under their own democratic control, is essential to fight for genuine national liberation.

It will be through the building of independent mass workers’ movements and parties throughout the region that the right-wing and pro-big business agendas of all the current ruling parties can be challenged and socialist ideas can start to take hold. A socialist Palestine and a socialist Israel, as part of a socialist confederation of the Middle East, would lay the basis for a future free from war, terror and poverty.

This is the programme that Socialist Struggle Movement (CWI) courageously fights for in Israel-Palestine.

Ten Years Since the Egyptian Revolution

10 Years of Revolution in the Arab World: Faded Spring?

Coronavirus in Africa: Capitalism Driving a Continent Into the Abyss