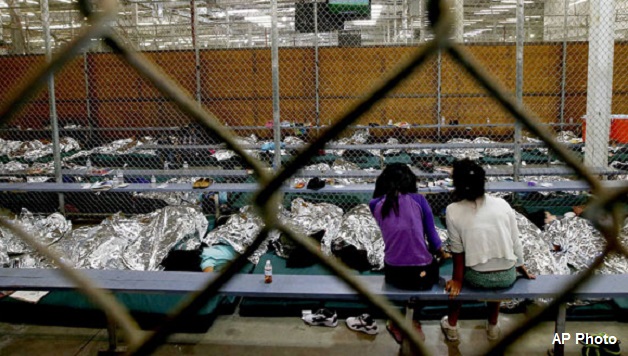 The Obama Administration has revealed a plan to spend $3.7 billion to curb the recent influx of Central American refugees, which includes approximately 90,000 unaccompanied children crossing the U.S.-Mexico border. Leaked pictures of detention facilities for immigrants have flooded the U.S. media, revealing overcrowded, inhumane conditions in which thousands of people are confined and subjected to right-wing, anti-immigrant rhetoric from politicians and extremist organizations. This situation has provided small groups of racists in Murrieta, Calif., who attacked buses of these children, a national platform to promote a disgusting display of resistance to immigration.

Amidst all of this, the predicament of these young children and why they are migrating is forgotten. There is a severe lack of knowledge regarding the strong relationship between U.S. policies and geopolitical strategies in Central America and the recent northward migration. The displacement of a generation is intrinsically tied to the political, military and economic policies that are created and implemented by the U.S. government, either independently, or through the local ruling classes in the region. It is a further indictment of the U.S. government’s immigration policy that these guiltless victims are treated as outcasts and fugitives.

Since 1971, the U.S.-led “War on Drugs”has continued to make the U.S. prison population the largest in the world. According to the United Nations, the War on Drugs has actually expanded the production and distribution of many drugs regardless of its ostensible intentions. The entire structure of U.S. policy in the War on Drugs has resulted in pushing this drug violence into Latin America, particularly now Central America and parts of Mexico. In 1994, the U.S. increased militarization along the U.S.-Mexico border under the pretext of hindering drug cartels. Rather than stopping the flow of drugs, this has engineered a war zone, where gangs and cartels battle for a monopoly on the U.S. market. Over the past decade, murder rates in Central America have increased by nearly 100 percent. The existing unemployment and poverty has only been intensified by this violence.

But this is only one aspect of how U.S. policy has helped create the conditions driving ordinary people to take the huge risk of leaving their homes and making the perilous journey north. In 2004, several right-wing governments of Central America collaborated with the United States to establish the Dominican Republic-Central American Free Trade Agreement (CAFTA-DR). The CAFTA-DR, inspired by the North American Free Trade Agreement (NAFTA), dramatically reduced tariffs for U.S. products and limited various forms of government regulation. This agreement, a classic example of the destructive impact of neo-liberalism, was allegedly created to improve the economy and increase employment by encouraging foreign investment in Central America.  But due to the inability of small farmers to compete with the massive incursion of cheap U.S. agricultural products, nearly 200,000 rural workers have been displaced over the past decade. These workers have largely been forced into manufacturing jobs in “free trade zones,” known as maquilas or maquiladoras, which often utilize child labor, anti-union intimidation, long hours and low pay. “Free trade”agreements, such as the CAFTA-DR and NAFTA, are tools of imperialism that effectively undermine Central American economies and manage them in favor of U.S. capital. Due to the impossibility of earning a decent living under these conditions, millions of people have been forced to emigrate in order to survive.

In 2009, Honduran President Manuel Zelaya was swept away in a brutal U.S.-backed military coup after promising a more democratic constitution and reforms to combat poverty. The current government, disturbingly reminiscent of previous regimes, has been an ally of Wall Street and other corporate interests within the region. Likewise, Guatemala’s government has also revived severe police repression of the labor movement, indigenous people and other progressive opponents.

President Barack Obama has repeatedly said that he only wants to deport immigrants who have engaged in violent crime. In reality, he has exceeded his predecessor, George W. Bush, in deporting innocent people. While applauding countries, such as Turkey and Jordan, for accepting large numbers of refugees, he is trying to prevent children fleeing horrific violence from entering the country. The thousands of young people arriving at the U.S. border are trying to reunite with parents and family members who are already in the country or are simply trying to find peace and stability. In actuality, the U.S. government has played a firsthand role in creating their hardship and deracination.

We agree with the call put forward by a number of groups to give refugee status to children fleeing violence in Central America. However, we must go further and demand the immediate end of all deportations and full rights and legalization for all undocumented immigrants.