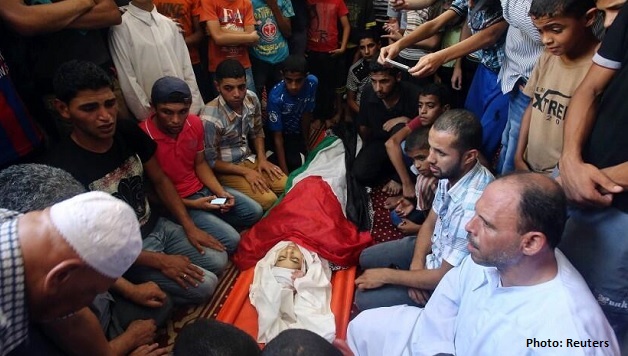 Over 100 Gazans killed in one week, including 20 children

Netanyahu’s Israeli government has launched a horrific onslaught of hundreds of air strikes on the densely populated Gaza strip. Over 100 Gazans have been killed in one week, including 20 children. 400 have been injured. One strike hit a group of football fans who had gathered to watch a world cup match; nine were killed.

Netanyahu argues that this brutality is necessary to counter the increased rocket fire on Israeli towns by Palestinian militias, and President Obama has given him his support in this carnage. The Palestinians are largely militarily defenseless against the huge Israeli armed forces, but the militias’ rocket fire is no deterrent to the Israeli regime and its indiscriminate use is counter-productive.

The savagery of the Israeli regime’s bombardment is stark, especially when considering that there have been no Israeli deaths and few serious injuries so far from the rockets in this round of bloodshed, though tragic loss of life of some Israeli civilians may yet happen.

This terrible military offensive will solve nothing. Netanyahu rejected the ceasefire conditions of Gaza’s Hamas leaders: an end to the Israeli offensive and blockade, the release of prisoners who were freed under a prisoner swap but then re-arrested, and no sabotaging of the new Palestinian ‘unity’ government. Instead the Israeli army has been preparing for an even greater onslaught – a ground invasion – which would escalate the bloodshed, especially for the Palestinians.

The entire strategy of Netanyahu’s right-wing coalition government has been one of continuing the repressive occupation and creating more ‘facts on the ground’ through its programs of Jewish settlement building and expansion. Palestinians in the occupied territories are forced to suffer heavy repression with regular military incursions, acute unemployment and poverty, and are blockaded, separated and have land continually confiscated.

No end to the national conflict is possible on this basis – the Palestinians have no choice but to continue to struggle for national liberation and decent living standards.

The present cycle of bloodshed was triggered when three Israeli teenagers disappeared and were later tragically found murdered. The Israeli military forces launched a collective punishment operation across the Palestinian territories and there were some nationalist far-right demonstrations and attacks in Israel which included the horrific murder of a young east Jerusalem Palestinian. In response, widespread protests and riots broke out among Palestinians in a number of areas of Israel.

There were also joint anti-war protests of Jews and Arabs in Tel Aviv, Jerusalem and Haifa, which Socialist Struggle Movement (the Committee for a Workers International – CWI – in Israel/Palestine) has participated in (see box).

Anti-war demonstrations around the world need to be stepped up; and also in Israel – to oppose the propaganda and nationalist incitement of the Israeli leaders and make it clear that the bloodshed is not in the interests of ordinary Israelis. A majority of Israeli people support the setting up of an independent Palestinian state and the dismantling of settlements. However, Netanyahu’s government is using the murders of the three Israeli teenagers and the rocket fire to reinforce the fears of Israelis and unleash further savage repression, which will certainly not bring peace and security for people in Israel.

Tragically, the pro-capitalist political leaders on both sides of the national divide have no program that will end the cycles of bloodshed. Instead, the Palestinian masses need to build their own grassroots organizations that can democratically organize defense and take offensive initiatives based on mass struggle – such as against the blockade and land seizures.

In Israel, following the unprecedented social movement involving hundreds of thousands of people in 2011, a new workers’ party is needed to concretely advance the aspirations of that movement – for decent housing, services, pay etc.

It will be through the building of new mass workers’ parties and movements in the region that the pro-big business agendas of the capitalist parties can be challenged and thrown out, and socialist ideas can start to take hold. That will be the route to building a socialist Palestine and a socialist Israel as part of a socialist confederation of the Middle East, laying the basis for a future free of war, terror and poverty.

Hundreds of Jews and Arabs gathered in Haifa, Israel, on July 5th, in a demonstration organised to condemn and oppose a previous far-right demonstration that had incited racist attacks on Arabs. Among the speakers at the unity demo was Shay Galy from Socialist Struggle Movement (Socialist Alternative’s CWI sister organization in Israel), who spelt out that during the failed, so-called peace talks the government had: “in less than nine months, managed to approve construction of 13,000 new homes in the settlements, destroyed over 500 [Palestinian] homes in the West Bank and East Jerusalem, killed 61 Palestinians and wounded 1,100.” He went on to demand: “No to military attacks in Gaza and no to the continuation of oppression in the West Bank and East Jerusalem. Yes to real and equal security for Palestinians and Israelis.”