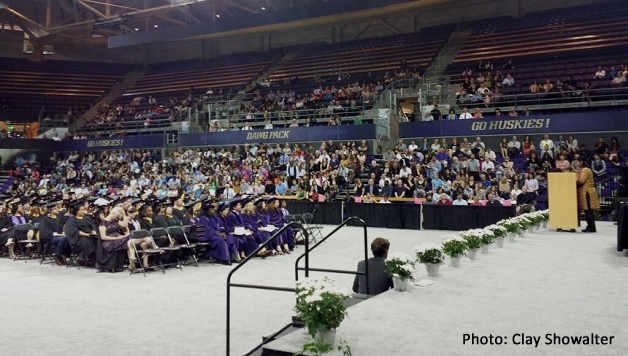 This is the text of Socialist Alternative Seattle City Councilmember Kshama Sawant’s keynote address to approximately 2,000 people at the commencement ceremony of the University of Washington’s School of Social Work graduation, which was well received.

It is my honor to share this day with you, a day that will always remain memorable to you and those who love you. You accomplishments embody the wonderful work of your faculty.

In an age when young people are encouraged to avoid the path of social justice to instead pursue the shortest possible way to a lucrative career, I am happy to address a group that has chosen a life informed by their greater sense of commitment to social responsibility.

A commencement ceremony is often the time that speakers focus on the future career path for new graduates. By convention, I should highlight the opportunities that lie ahead of you to advance yourselves personally, professionally, and financially, and how you can reach the pinnacles of conventional success through hard work and dedication.

But I am not going to do that. Instead, I will share with you what I wish I had heard, in retrospect, when I graduated. Yes, hard work is essential. But the question is, how do we work and to what end? I went first to engineering school, and then to graduate school for economics. Growing up, and increasingly as an undergraduate, I had a profound sense that something was missing. I chose economics because I wanted answers — answers to the crisis of global poverty and social injustice. I hope, today, that I am speaking to that same hunger for answers in each of you.

We live in a political and economic system that is not oriented around meeting the needs of all of society. Instead, the capitalist system is built upon private ownership and profit for the benefit of those few in power.

As long as there is economic and social injustice, as there will always be under capitalism, it is imperative that those who object make fighting injustice a serious endeavor in their life. The successful movements of every era, be it the fight for the eight-hour day or the civil rights movement or the struggle for LGBTQ rights, would not have come into existence, let alone have been won, without tens of thousands of activists who made these struggles the central focus of their lives.

We are heading, I think, into another such era of dynamic social movements. The Occupy Movement, fast food workers strikes, the activism against the Keystone XL pipeline and climate change, and the fight for a $15 minimum wage are all signs of things to come. The victory of the movement for $15/hour in Seattle wouldn’t have been possible without these previous struggles, and it is a tremendous step in the direction of far greater ones.

Already, San Francisco is building on our victory in Seattle – with an agreement reached this week for all workers to receive $15 by 2018. The debate has heated up in Chicago and New York, and elsewhere, even globally. This is the just the beginning of a growing fight back against poverty wages and massive inequality. Workers are seeing that when we organize, we can win.

The times we live in call urgently for young people like yourselves to take up not only the role of social worker, but also that of activist and fighter for social justice.

You are all witnesses to the ongoing social and economic crisis, in which the safety net of social work is made necessary because of the holes in our social fabric left by capitalism. The new cohort of graduates are themselves faced with student debt that has crossed an aggregate of one trillion dollars, reaching insurmountable levels for many individuals. Tuition hikes, cuts to financial aid, and attacks on teacher unions have become common. A majority of young workers, despite higher education, enter a low-wage job market.

As social work graduates, many of you are aware that you are entering into jobs that are physically, mentally, and emotionally demanding. Many of you will continue assisting low-income families, homeless adults, youth, and children, those who have been impacted by domestic violence, and those with mental or physical challenges. It is social workers who provide services for those most marginalized and most in need of help. And that is why I am honored to be here among you.

Something unexpected has arisen out of the struggle for $15/hour in Seattle. For the first time in my memory, a real discussion has begun in this city about the crisis of funding for nonprofits, and particularly human service providers.

With the expanding social and economic crisis especially following the last recession, the need for services is growing. At the same time, funding for these services has stagnated for years, if not decades. City and state funding often doesn’t even keep up with the economy’s inflation rate, and does not allow for the necessary expansion to meet the growing needs.

Social workers have themselves spoken up this year for the need for a living wage, both for themselves and for all workers. Across the country they have been part of the broader movement for $15/hour. They have said that they are tired of being taken for granted and want the respect they deserve – and that respect is a hollow term without a living wage. The voices of social workers were some of the most important ones in defeating the big business agenda and winning fifteen for the 100,000 workers in Seattle who remain in poverty.

During your practicums as social work students, you have already been on the frontlines, directly providing critical services to those most in need. And many of you have worked without pay, meaning that you have been forced to support yourself by taking on part-time jobs, on top of your exhausting practicum work and graduate studies. And while doing this crucial social work, you were not covered by the basic protections that your coworkers had in these workplaces.

This is not unique to the University of Washington’s School of Social Work — this exists across the country. But what is unique here in Seattle is that there is a group among you that is actively organizing for the labor rights of students. And this group of activists — called Social Workers Stand Up — have correctly said to my office that if we cannot find social justice here, at the School of Social Work at a publicly-funded university, then where are we going to find it?

Social Workers Stand Up have taken responsibility to not only fight for institutional change in broader society, but also here at UW. And because of their activism, the School of Social Work is internally reviewing its labor practices. I hope you are inspired by the work of your peers, and I urge all of you, especially the faculty, advisers and administration, to join me in supporting these students who are actively fighting for justice.

Custodial workers here at UW are also building a political campaign as they negotiate a new contract. They are fighting for a $15/hour base wage, the right to use their paid sick leave, and to see custodial vacancies filled. I appeal to you to stand in solidarity with the custodians. Their campaign, as well as Social Workers Stand Up , are both struggles for basic workplace rights.
It is only through organizing and building these struggles that we can change society, and each of you are in a position to create this change. You as social workers have a continuing role to play in the movements of the future.

Social work itself is crucial for urgently bringing about tangible improvements in people’s lives. Social work is integral to social change. Helping one person today find food or shelter, and get connected to the services they need, is transformative for that individual.

But we see how the economic crisis of capitalism is pushing more and more people on the edge of financial collapse. This exacerbates the social crises. More people are becoming homeless as low wages and job losses proliferate, housing and health care costs are skyrocketing, and poverty is rising at stunning, alarming rates.

Social workers are in a position to be powerful advocates for rejecting the status quo. Because as social workers, you are directly assisting those who have been oppressed and marginalized the most, and you can clearly identify the systemic roots of so much of this suffering, this massive inequality and poverty in our society.

I hope that the compassion, dedication and personal sacrifice you have displayed in your education will continue. I hope you will combine it with a sense of urgency. And lastly, I hope that you will work also for the deeper, systemic change that our nation, and our world, so desperately need.