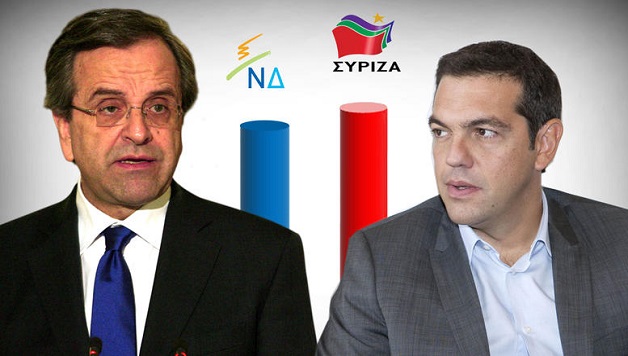 Syriza, the left party in Greece, topped the polls in Greece’s European elections, ahead of the right wing New Democracy, the main governing party. Andros Payiatsos, general secretary of Xekinima, spoke to socialistworld.net about the significance of the results and also the electoral breakthrough for Xekinima in Volos city.

Syriza, the left party in Greece, is now the first party – 3.9 % ahead of right wing capitalist party New Democracy in the European elections. But this difference is mainly due to loss of support for New Democracy. Syriza’s vote has actually decreased since the June 2012 elections by 138,000 votes – a significant loss, amounting to more than 8% of its 2012 vote.

So while Syriza “celebrates” being the first party, the governing coalition parties New Democracy and Pasok (the traditional social democratic party) are relieved, saying that Syriza has insufficient support to form a government. Syriza campaigned heavily on the idea of using the elections to get rid of the government: “On the 25th we vote, on the 26th they go” – was the central slogan of the campaign! But the coalition government is not in danger of an immediate collapse.

Another factor that makes for a very reserved enthusiasm even among SYRIZA’s rank and file is the high vote received by Golden Dawn, receiving close to 9.5% of the vote. This is despite the fact that GD is now proven to be a murderous gang, with most of its first line leadership in custody and well known to be a Nazi organisation with ample evidence provided by the media and the judiciary system.

Actually the rise of GD is fundamentally a result of the depth of the crisis and the complete of lack of showing a way out by the parties of the Left.

The fundamental factor explaining these developments is the fact that SYRIZA has been moving more and more to the right in the course of the last couple of years and the KKE (Greek communist party) and ANTARSYA (the ‘anti-capitalist left’ alliance) follow a sectarian policy of refusing to collaborate. This creates a political vacuum in society which is utilized by the neo Nazis.

This lack of daring socialist policies on the part of SYRIZA is the basic explanation for its inability to inspire and attract the mass of Greek workes. The drop in SYRIZA’s support was particularly high in the working class districts of Athens, Piraeus and Salonica. The KKE and ANTARSYA also got a low vote in the Euro-elections – the KKE received only 6% and ANTARSYA 0.7%.

“Vote for the Left – fight to bring the government down!”

Local elections took place at the same time as the Euroelections in Greece. Xekinima (CWI Greece) stood a total of nearly 20 members in different city, district and regional councils. Xekinima did not stand everywhere where we had forces, but chose to stand with lists that had a militant left profile and a “unifying” approach towards other forces of the Left

One of the slogans we used frequently was “Vote for the Left – fight to bring the government down”. We explained the need for a socialist programme, the inadequacies of SYRIZA’s programme and the sectarian mistake of the Left refusing to collaborate.

In about 60% of cases, we stood with Syriza, in others with Antasya and in the case of one local council with the communist party. Xekinima was the only organisation on the Left to stand together with all the parties of the Left in different constituencies – when all three parties of the left refuse to “talk” to each other.

Needless to say that Xekinima’s campaign was an independent campaign, based on our own material and with our own positions.

Our results have been very good. We received in general a good vote, in lists ranging of a minimum of 38 candidates (by law) to 70, depending on the size of the constituencies. Regions have an average of about 850,000 people, districts can be as large as 200,000.

Nikos Kanellis was elected in the district council around the city of Volos with an exceptionally good vote – around 750 votes, which placed him fourth out of around 40 candidates.

Costas Iatropoulos was elected in the city council of Volos, receiving around 650 votes which placed him second.

Another comrade, Marianthi Kypridou came fourth in the same election with around 470 votes – it’s not yet clear, as the official final results have not come out yet, but there is a good chance that she, too, will be on the city council of Volos.

Antarsya did badly in the Euroelections, but in the local elections it received a respectable 2.5%. In Zografou Xekinima collaborated with Antarsya and the common list, called ‘Zografou Movement,’ received around 4% – this is a success which, to a large extent, is attributed by Left activists, in general, to Xekinima’s presence. Comrade Irene Ploumbidi received the greatest number of individual votes, coming first out of 38 candidates – an extraordinary 15% of the total vote received by the Zografou Movement. The system of representation in the city council agreed by the Zografou Movement is based on a rota system, as it is an alliance of different groups and forces. On this basis, comrade Irene will the first councillor to replace the ‘chair’ of the list, who is the first one to represent the list in the council.

These elections were the biggest campaign ever launched by Xekinima. We produced a total of 250,000 leaflets which went everywhere. And our intervention has had an impact – the best of our results will be noted by the left across the country.