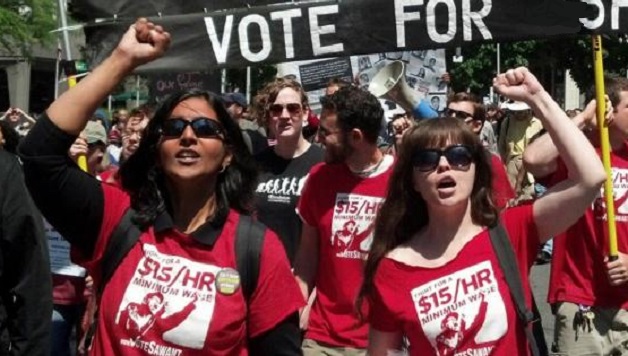 Jess Spear can win this race, but not without your help!

This is the text of a leaflet for the Vote Spear campaign.  Click here for a PDF file that you can download and print.

“As the Organizing Director of 15 Now I have helped lead the fight for a $15/hr minimum wage in Seattle and in cities across America. My opponent, Speaker Chopp, was unable to even get a $12 minimum wage out of committee. I understand that working people need and deserve a representative that will fight for their interests”
– Jess Spear

The election of Socialist Alternative candidate Kshama Sawant in Seattle last November was a major inspiration and sign of encouragement to people all over the US who are fed up with the two-party system.

In only six months since her election and the launch of 15 Now, workers in Seattle have won $15/hour, the highest minimum wage in the country. Socialist Alternative has demonstrated, through the election of Kshama Sawant and the launch of 15 Now, that real gains can be won for working people through the combination of electing independent working-class candidates and building a movement.

Imagine what a boost it will be for all those fighting the corporate agenda, if we can repeat this victory, and show it was not just a one-time event! This would put socialist ideas back on the agenda and open the way for a left, working-class-based force to be built all over the U.S.

And this is what will happen when Socialist Alternative candidate Jess Spear takes down the Democratic Party Speaker of the Washington State House, Frank Chopp.

Jess is running to challenge the corporate control of Washington State. Chopp led the way in pushing through the record-setting handout of $8.7 billion to Boeing last year.

While Jess is running to give a voice to the renters facing skyrocketing rent, Chopp is funded by big developers and hasn’t lifted a finger to remove the state ban preventing cities in Washington to implement desperately-needed rent control.

While Jess is running to defend bus riders facing drastic cuts to public transit, under Chopp’s leadership, Washington has prioritized corporate tax breaks over funding for transit, education and healthcare.

Jess will fight for full funding for education and reduced class sizes. In 2000, the people of Washington voted by record margins to reduce class-sizes and give teachers a raise. As Speaker of the House Chopp ignored the results of this ballot initiative and instead gave Boeing a $3.2 billion tax break!

As a climate scientist and socialist, Jess is running to give a voice to all those concerned about climate change and to make Washington state a global leader on this critical issue.

A 20-year incumbent, Frank Chopp represents everything that is broken in Washington State politics and with “progressive” Democrats across the country. While he talks of helping the homeless and expanding access to healthcare, Chopp actually serves big business. Unlike her opponent, Jess does not accept any corporate money.

This is our chance – an opportunity for unions, socialists and greens – to make a historic breakthrough for progressive politics by electing a second socialist in Seattle in two years. We can take out Frank Chopp and put socialist ideas on the political map in a way not seen in decades.

Big business and the super-rich are well represented by the Republican and Democratic parties. A victory for Jess Spear would put the building of an independent political party to represent the 99% on the agenda.

Jess is an experienced and proven organizer for workers, the environment, and women. She is a climate scientist and a member of Socialist Alternative. Last year, she organized 450 volunteers as the Volunteer Coordinator for the historic Kshama Sawant campaign for Seattle City Council. She currently is the Organizing Director of 15 Now, the grassroots organization that led the way in winning a $15 minimum wage in Seattle.
Help us make history!​​Jess can win this race, but not without your help! To run an all-out campaign we need to raise $200,000. We don’t take any money from big business. We rely on workers, activists, and unions. Please donate – large or small – today at www.VoteSpear.org