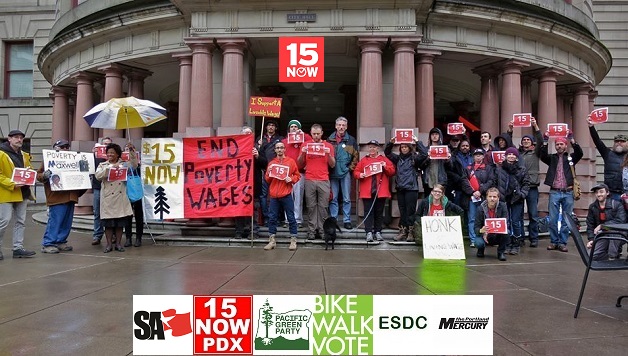 “This is Just the Beginning”

The day after Nicholas Caleb lost his bid for Portland City Council on May 20th, a hundred people rallied at city hall demanding a $15 minimum wage. Caleb spoke at the rally, encouraged that the “fight for $15” didn’t end with his primary election campaign. Portland’s elites were likely puzzled: they got rid of Caleb electorally—who they regarded as a populist nuisance—but didn’t manage to kill his ideas.

Caleb’s campaign ideas were directly inspired by Kshama Sawant’s historic campaign in Seattle, the Socialist Alternative candidate who defeated an incumbent Democrat for Seattle City Council in 2013. Caleb believed, correctly, that the demands in Sawant’s platform would resonate well in Portland and decided to use his electoral campaign to build a grassroots movement around the $15 minimum wage demand, since no one else was doing it.

At no time did Caleb make himself bigger than the movement he was representing; he merely wanted to bring attention to ideas ignored by the corporate politicians, and add energy to already existing campaigns, such as the various labor struggles that the city council was pretending didn’t exist. He ran not for personal gratification, nor to advance his own political career, but out of disgust that no one was challenging the corporate Democrats who dominate Portland politics. So Caleb declared his candidacy on the last possible day, which gave him only two months to campaign in the primary election, raising a mere $4,700 in donations (plus $900 in in-kind donations). He consequently received a very decent 19% of the vote, inspired the birth of the 15 Now movement in Portland, and significantly changed the political conversation in the city. The energy around Caleb’s campaign certainly forced the media and political establishment to pay attention.

Caleb succeeded beyond many people’s wildest expectations. His corporate opponent, Democrat Dan Saltzman, ran an entirely defensive campaign, in reaction to Caleb’s lively efforts, which exposed the lifelessness in Saltzman’s politics. Suddenly the incumbent was in favor of a living wage—which he vaguely defined as $10-$15 an hour.

Caleb’s campaign also jolted the rest of Portland City Council, who suddenly aroused from their coma to actually address issues facing working people. At a joint press conference council members asked the state legislature to remove barriers for raising the minimum wage in Portland—a tiny first step that Caleb castigated as insufficient. Caleb then offered several immediate actions that the city council could take to raise wages for public employees. Thus far, the city council has not followed up with their well-timed campaign-season press conference.

However many the victories, Caleb’s campaign also faced many barriers in addition to the short timeline he had to build a campaign. Portland’s electoral system is especially skewed toward the wealthy. Caleb lost in the primary election largely because the rules give incumbents an unfair advantage by granting them an immediate victory if they receive over 50% of the vote in a primary election without having to even contest the general election in November. If Caleb were running in other states like Washington state, when Caleb came in second place out of four candidates, he would have qualified for a runoff in the general election even though Salzman won 63%.

Kshama Sawant won only 12% in her first primary race in August 2012. Similarly, Harvey Milk, the first openly gay male elected to office in the U.S. (although a Democrat) had to run four times before finally winning office in 1977.

Caleb’s opponent also bought the election outright. Caleb limited his campaign contributions to $50, which, although good for PR purposes, added a critical handicap that put him at a huge disadvantage in comparison with Saltzman’s corporate war chest of $121,000 (plus $8,300 in in-kind donations). Thus, Saltzman was able to reach thousands more voters in the city, through snazzy mailings, local radio advertisements, and plastering his name over bus stops that the Caleb campaign couldn’t reach.

In order to defeat Seattle incumbent Richard Conlin who raised over $240,000, the Sawant campaign took an extremely serious approach to mass outreach, door-knocking, and fundraising, raising over $140,000 without accepting a dime in corporate cash. Sawant’s median donation was only $40, with donations coming overwhelmingly from working-class folks. Sawant’s campaign showed that money and power are not automatically corrupting; it depends in part which class is using them and in whose interests – the working class or the richest 1%. There is no shame in raising funds from the working class to build a movement of the 99%. On the contrary, it is absolutely essential if we are serious about organizing social movements to fight the climate crisis and growing inequality.

Another great advantage Sawant had which Caleb’s campaign lacked was a socialist organization – a group with clear strategies for building a mass movement to replace the profit-driven capitalist system with a democratically planned, environmentally sustainable society. Socialist Alternative, built up through struggles and educational meetings for years beforehand, served as the political and organization backbone of Sawant’s campaign.

It’s also likely that Caleb’s campaign over-relied on social media. Yes, Caleb’s social media presence completely dominated his opponent’s and helped spark energy into the campaign. But social media must be a subsidiary to the harder work of face-to-face organizing and door-to-door canvassing, which Caleb’s campaign didn’t prioritize, due in large part to insufficient volunteers, resources, and time.

The one force that might have helped equal Saltzman’s resources was Portland’s labor movement, most of which shamefully supported Saltzman, who appreciates the support of his corporate donors more than the unions he tolerates. The labor endorsements came rolling in despite the fact that the incumbent stayed silently “neutral”—i.e., against the unions— when Portland’s teachers, city workers, and Portland State University faculty had all voted to strike.

Saltzman had also presided over years of austerity cuts to Portland city services, rather than making the wealthy pay for the city’s deficits. Ultimately Saltzman doesn’t even need the money that unions waste on him, since he gets big cash from Portland’s wealthiest individuals and corporations, who he is a voracious advocate for.

Hopefully Caleb will run again in two years, and perhaps by then labor will have learned its lesson. Most union leaders are notoriously conservative when it comes to politics – they only pick “winners” and rarely take risks. Caleb has now proven to the city that he’s a viable candidate, and the sooner he declares an intention to run the more time he’ll have to win over unions. But he will need to start with the rank-and-file members, encouraging them to pass resolutions in their unions and labor councils in support of his candidacy. Top union officials have proven time and again that they are prepared to tie the unions to the Democratic Party, despite its disastrous results for union members.

Caleb’s campaign has planted an important seed that unions would be better off running their own independent candidates—using their immense resources and membership—rather than relying on the Democrats, who’ve never been reliable for unions. Those that volunteered for Caleb’s campaign can be very proud of their numerous achievements. Perhaps the greatest victory was showing people that another type of politics was possible—one that inspires average people to fight for basic popular needs ignored by the elite-dominated two-party system.

To his credit, Caleb ran not only as an independent candidate against the Democratic Party, but he courageously came out in favor of democratic socialism in the middle of his campaign as the logical alternative to capitalism which he correctly described as “insane.”

The Caleb campaign broke not only with capitalism and the Democratic Party but also implicitly with some aspects of anarchist strategies, which generally oppose participation in electoral politics as well as the concept of leadership. Caleb and Sawant have shown how leadership and political power in themselves are not necessarily corrupting, as long as the leader is intimately connected with working-class movements and fights consistently for working-class people and oppressed groups.

This year, in an extremely encouraging sign, a number of independent left-wing electoral campaigns such as the Jess Spear campaign are sprouting up around the country demanding a $15 minimum wage, partially inspired by Sawant’s success. Hopefully these independent campaigns will make at least as much of an impact as Caleb’s, helping pave the way for what is urgently needed – an independent mass party of the 99% to seriously challenge corporate politics.