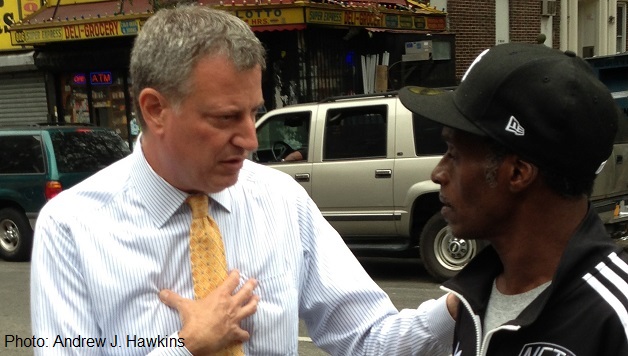 Populism Is Not Enough

The election of populist Bill de Blasio as mayor of New York City a few months ago raised real expectations among working-class New Yorkers, who understandably celebrated the end of 12 years of multibillionaire Mike Bloomberg’s direct rule on behalf of Wall Street. In his first months in office, de Blasio has set out to fulfill some of his campaign promises and has, predictably, faced serious resistance, mainly from his fellow Democrat, Governor Andrew Cuomo. But the outcome of the loud debate with Cuomo also shows the limits of left populism and the need for serious social struggle in order to win victories.

The essence of de Blasio’s campaign for mayor was a clear message: NYC represents the tale of two cities, that is, massive and growing social inequality. De Blasio’s campaign reflected pressure from below and a shift to the left in the city. But it also reflected a division in the elite about how to respond to the new situation, with one wing seeing a need for some limited reforms – partly to stave off more serious unrest – while the other wishes to pursue unrelenting class war against the 99%.

Since being elected, de Blasio has indeed set out to enact a series of progressive measures, albeit with serious limitations. For example, he rapidly announced the significant scaling back of the hated “Stop and Frisk” policy of the New York Police Department. This was a real step forward, although not quite the “end the era of stop-and-frisk policing” promised during his election campaign. In March, de Blasio also signed a bill that extends the right to paid sick leave to a further 500,000 workers in the city. He has supported raising the minimum wage and has backed a bill in the state legislature to let NYC raise its own minimum wage higher than the state’s, although he hasn’t stated a figure for what he wants as a new minimum wage.

However, de Blasio’s biggest fights to date have centered on education policy. He came out swinging in January for his proposal to tax the wealthy to pay for universal pre-K in New York City. However, this required approval in Albany, the state capital. He also said that he would begin to charge rent to charter schools that are “co-located” with public schools in public school buildings. Under Bloomberg, they had received a free ride as wave after wave of school closings were pushed through to create space for ever more charters. This was all part of the corporate drive to privatize public education.

But de Blasio’s modest proposals met with a ferocious push-back from Governor Cuomo and charter school leaders, backed by Wall Street and hedge-fund managers, who play a big role in bankrolling charters. Cuomo was clearly representing the majority of the corporate establishment, and Wall Street in particular, who want no challenge to the status quo and have set out to clip de Blasio’s wings.

De Blasio did not initially back down, but neither did he mobilize the students, teachers, and parents in public schools, who vastly outnumber the charter supporters and are overwhelmingly opposed to charter “co-locations,” endless budget cuts, and high-stakes testing. This allowed the corporate charters to move on the offensive with a $5 million advertising blitz.

De Blasio was outgunned, and he began “reaching out” to the charter school supporters. By the end of March, Cuomo had gotten the Republicans and Democrats in the state legislature, as part of budget negotiations, to agree to fund pre-K out of general education funds – without raising taxes on the wealthy. The Albany politicians also agreed to give charter schools even more access to public school buildings by requiring the city to provide space to new and expanding charters or contribute to the cost of renting private buildings.

The Need for Serious Struggle

De Blasio can fairly claim that without his push there would be no prospect of a significant expansion of pre-K next fall. However, the failure of de Blasio and the teachers’ union to mobilize working people to defend public education and push for a massive increase in funding for education left it open to Cuomo, Moskowitz, and their hedge-fund buddies to pretend that charter school students and parents were being attacked and to confuse the issues.

Socialist Alternative fully supports higher taxes on the rich, raising the minimum wage to a level that would really allow hundreds of thousands to begin to escape poverty, ending police violence, reversing all the cuts to education, and a moratorium on further charter schools. But these gains will not be achieved without serious social struggle. Fundamentally, neither the Democratic Party as a whole, nor its populist wing represented by de Blasio, nor, unfortunately, the bulk of trade union leaders are prepared to countenance this path.

Next up for de Blasio is addressing the legitimate demands of city workers for retroactive pay increases after years in which Bloomberg basically refused to negotiate new contracts. The word is that de Blasio may agree to some retroactive pay in return for making workers pay more for health care – the usual approach of establishment politicians.

The hope of millions in New York and around the country cannot be realized by electing Democratic populists into office. The victory of Socialist Alternative candidate Kshama Sawant in Seattle and the development of a serious grassroots campaign for a $15/hr minimum wage in that city points to the need for a clean break with the Democratic Party. As we can see in New York, Wall Street and their representatives will step in as soon as they perceive even a minimal challenge to their interests. Only a movement from below, built and organized by working people, can challenge the major corporations and their parties.