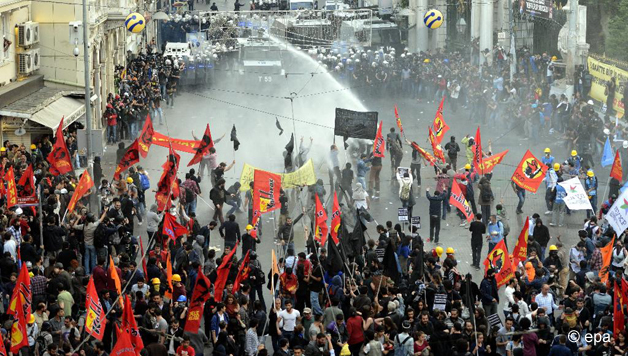 Soma mine disaster deadliest in the country’s history On Tuesday 13, apparently faulty electrical equipment sparked a deadly explosion in a coal mine in Soma, western Turkey. The latest news report indicate that at least 282 miners have lost their lives, while over 100 miners are still trapped underground, and countless corpses still lie in the galleries. The Soma mine disaster is the worst industrial accident ever happened in Turkish history. As the rescue operations continue, the hopes of finding survivors are diminishing by the hour.

Very quickly, protests have spread across Turkey, as many workers and young people correctly see the ruling AKP government and its pro-big business friends as the primarily responsible for this catastrophe. This is taking place in the wake of a wave of scandals implicating the ruling party and the Prime Minister Erdogan’s family over the last few months, as well as mass anti-government protests last year around the events at Taksim Square.

This time however, the fear of the Turkish ruling class lies in the fact that the very heartlands of the working class, for some time an important base of electoral support for the AKP, are fueled with rage and rising up against the increasingly unpopular Erdogan regime.

When Erdogan visited the mine in Soma on Wednesday, he was massively booed, and denounced by angry local inhabitants and miners’ families as a murderer and a thief. A video shows Erdogan having to hide himself in a supermarket protected by body guards to escape enraged protesters. In Istanbul, Ankara and many other cities, thousands have taken to the streets from Wednesday onwards, demanding the government to resign, facing sometimes strong repression from the police. Four Turkish union centers eventually called for a 24 hour national strike on Thursday, which was massively followed, and accompanied by mass demonstrations, including 20,000 protesters reported in the western city of Izmir, Turkey’s third largest city.

The AKP and Erdogan’s policies have, fundamentally, been aimed at helping the capitalists around the ruling party all along. This is illustrated in the AKP’s arrogant and contemptuous response to the grief and growing anger at the Soma massacre throughout society. This was symbolized by the Turkish Prime Minister’s adviser, Yusuf Yerkel, being widely photographed in Soma kicking a relative of one of the dead miners while he was being held down by two security agents. Erdogan himself has been commenting that the disaster was an “ordinary thing, in the nature of the business”, and that there was no “accident-free” work…

But as miners, workers’ representatives and protesters put it, this is not an accident, but a massacre. The appeal below, written by the SPOT (Solidarity with People of Turkey), states that “in the 12 year period of AKP rule, more than 14,000 work-related deaths have occurred”. Likewise, the responsibility for this last deadly working disaster lies entirely on the shoulders of the neo-liberal AKP government and of its big business backers.

This government privatized the Soma mine in 2005. It is well documented now that the death toll in private mines in Turkey is eleven times higher than those in State-owned mines, graphically highlighting how the lives of hundreds of miners have been sacrificed on the altar of the drive for profit of a handful of private vultures. An essential demand of the movement should hence be the re-nationalisation under democratic workers’ control and management of the privatized mines.

The Turkish authorities have also refused for years to sign the International Labour Organisation’s No.176 “Security and Health in Mines Agreement”, which gives a set of obligations to the government and the mine bosses in order to guarantee a minimum of health and safety conditions to the workers, and to prevent accidents. The AKP rulers have also dismissed calls from the opposition a few weeks ago demanding an inquiry into safety and labor conditions in the mines, evidently in order to protect their mine-owning cronies. The incestuous relations between the ruling party and the capitalist class is such that the Soma mine owner’s wife is even reported to be a local councilor for the AKP!

The group of the CWI in Turkey, Sosyalist Alternatif, (who are circulating the proposals for action posted below) and the CWI as a whole stand in firm solidarity with the Soma miners and their relatives, and with the struggling workers and youth of Turkey at large. We support the building of a mass and sustained movement that can topple Erdogan’s rotten regime. In that sense, today’s strike must be the first step in building such a movement, to remove the AKP government and replace it with a working peoples’ government, that will defend democratic rights, break the grip of capitalism and implement socialist policies.

The formation of an independent commission of inquiry consisting of representatives of mineworkers, trade unions and democratic civil society organizations. Such a commission should have full transparency on its activities– all its findings must be made public!

The company owners, along with the government, must be held responsible and liable for what happened!

Free medical assistance must be provided to the survivors and to the families of the victims. Substantial financial compensation must be paid to them!

End the temporary employment agencies, imposing neo-liberal, deregulated and flexible working conditions. No more child labor. Pay the miners a living wage, with which they can feed themselves and their families.

The government officials primarily responsible for the disaster, including the Energy Minister and the Labour Minister, must resign immediately!

Open Soma’s books and disclose the company’s finances. The mine-owners have enriched themselves in recent years on the backs of the workers – all these profits should be returned to the workers!

Soma and all privatized companies must be re-nationalized under democratic control and management of the workers, without compensation.

At least 245 coal miners have lost their lives in the western town of Soma, Turkey, after an explosion caused a pit to collapse. Dozens of miners have been injured, four of whom are in critical condition. Hundreds are still trapped underground. Soma K-mürleri AŞ privately owns the mine.

The explosion occurred during a shift change, therefore it is still unclear as to exactly how many people are still underground in the mine.

The declaration of three days mourning; cancellation of the prime minister’s travel plans; messages of condolence; the presence of a minister at the scene; these are all crocodile tears and attempts to hide the reality. The people have not forgotten that it was prime minister Erdogan who cried out “death is the destiny of coal miners” after a murder incident that took place in the mines a short while ago.

The “research and investigation commission” of mining risks proposed by the opposition parties CHP, MHP and BDP’s members of parliament was rejected by the AKP government just 20 days ago. Motions forwarded by the HDP Istanbul MP Levent Tuzel in relation to the coal mining industry were brushed aside with excuses such as “the relevant ministers are carrying out constant inspections”.

The recent statement made by directors of the company that owns the mine, which bragged on about reducing expenses by around 60%, also has not been forgotten. Reducing the workforce, compulsory redundancies of experienced workers, subcontracting inexperienced workers, these are just some of the tactics of the greedy bosses in pursuit of higher profit margins.

One of the workers who died was only 15 years old; this clearly expresses the extent of the exploitation that is taking place.

The media exponents of the bosses and government speak of high standards of safety within the mines and refer to the incident as a “painful accident” in their headlines. Furthermore, the value given to workers is clearly expressed in the words of an “expert” of Soma coalmines, Professor Dr Orhan Kural, who said on a TV channel: “Dying from carbon monoxide is sweet; they would feel no pain. I wish myself a painless death too”.

We the members of SPOT, Solidarity with People of Turkey, would like to express our condolences and deep sorrow for the working class, for those who died tragically and their families. We vow to expose the faces of those who are responsible for this tragedy, namely the government and the bosses who are more concerned with profit making than the welfare of the workers. We will not let all these deaths in the workplace go unnoticed. In the 12 year period of AKP rule, more than 14,000 work-related deaths have occurred. We will not ever forget them.

We call on all communities, democratic organizations and trade unions to voice their concerns on this matter and to join us in protesting to both the AKP government and those who value profit and capital more than the worker.

You can send the protest statement below to government officials in Turkey, listed below. We kindly ask that you also bcc spot.turkey@mail.com with your protest email.

Should you need further information please do not hesitate to contact SPOT: spot.turkey@mail.com

Thank you in advance for your support, Oktay Sahbaz, SPOT.

The AKP government and the bosses are responsible for the coalminers’ deaths in Soma, Turkey.

Dear whom it may concern,

I, the undersigned, call on government ministers and senior officials in Turkey to launch a full independent investigation into the deaths of over 274 miners (and counting) at the privately run Soma coalmine.

I feel strongly that the deaths of the miners should not be categorized as “fate” or an “occupational hazard”.

I urge you to listen to the demands of the Turkish public and international opinion, and call to account the owners of the Soma coalmine for the highly dangerous health and safety conditions that led to the disastrous death of hundreds of miners.

In Turkey privately run coalmines regularly expose miners to hazardous and life threatening working conditions, and it is well documented that the death toll in private mines in Turkey is eleven times higher than in state-owned mines.

Furthermore, the request made to the Turkish parliament on 29 April 2014 for an enquiry into the health and safety conditions at the Soma coalmine presented an opportunity to prevent the deaths of over 245 miners on 13 May 2014.

It is clear that the lives of thousands of miners have been risked as part of cost-saving measures, with tragic consequences for miners and their families.

The Turkish government must bring to account those responsible for the brutal corporate murder of the Soma coalminers and ensure that steps are taken to improve health and safety in the mining sector with the aim of preventing such “accidents” in the future.