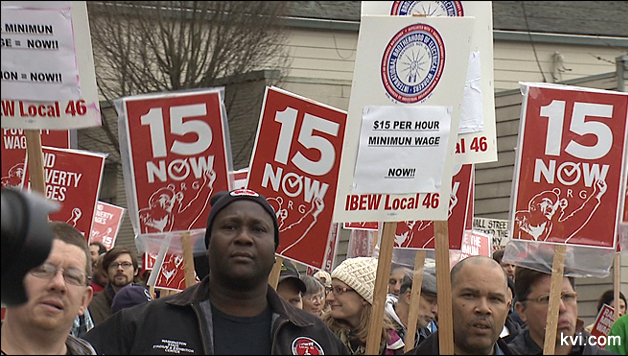 But nothing is decided yet: “Our work is far from done,” says Kshama Sawant.

Under intense pressure from the movement for a $15/hour minimum wage, Seattle’s establishment was forced to come forward with a proposal to significantly increase the wages for 102,000 low-paid workers. The proposal is less than workers are demanding, and it is still not in any way a done deal. Nevertheless, this shows the power of working people to stand up, raise their expectations, and push back against the big-business agenda dominating the U.S.

A year ago the proposed increase would have been difficult to imagine. The Mayor of Seattle, Ed Murray, is proposing a raise of the minimum wage of 50 percent, compared to Washington State, over 10 years. With a yearly inflation adjustment this would lift minimum wages in the Emerald City to more than $18/hour in 2025, which would make it the strongest minimum wage legislation in the US. The effects nationally will be huge. Already it is clear that it will encourage workers all across the US and beyond to step up the fight for $15 and more.

The strikes of fast food workers, the huge sympathy they received, the electoral success of Kshama Sawant in becoming the first socialist city councilor in Seattle in decades, and the impressive 15 Now campaign she and Socialist Alternative have launched – all together redefined what is achievable. It has empowered workers, disproportionately people of color, women and immigrants, to stand up and demand a life with dignity. It shows we can achieve a significant increase in living conditions, wages and working conditions, if we get organized and use our collective strength.

However, the deal is not yet sealed – and it has some severe flaws, that Kshama Sawant, Socialist Alternative and 15 Now are fighting to overcome. It was our grassroots movement that brought us this far – now we need to increase the pressure in the coming weeks on the city council to correct the weaknesses in the Mayor’s proposal. If the council fails to correct the proposal, there is still the option of putting a Charter Amendment to voters in November.

15 Now is preparing the signature gathering for this backup plan: “Signature gathering is a very, very important piece of action that needs to be continued in the next several weeks, so that the city council, which is going to have McDonald’s lobbyists whispering in one ear and Starbucks lobbyists whispering in another ear, to make sure that the voices of workers aren’t forgotten,” Kshama Sawant told the media.

On May Day the Mayor’s “Income Inequality Advisory Committee” finally delivered its plan. It’s a complicated plan because it aims to give the appearance of $15 to satisfy the demands of the public, while giving business loopholes to pay as little as possible in practice.

The president of the Seattle chapter of the National Restaurant Association, Bob Donegan, explained how the dominant section of Seattle business views the proposal when he told the City Council that he is supporting the Mayor’s proposal because it is the “least offensive of the imperfect solutions.” The Seattle Times, a fierce opponent of a $15 minimum wage in SeaTac and Seattle echoed similar sentiments in an editorial: “If Seattle must go to $15 — and that appears a political reality — there are elements to like in this deal” (5/3/2014). The proposal reflects what business has been forced to accept so far. It also points to the danger of the proposal being undermined further as soon as business feels in a strong enough position to do so. The long-term phase-in runs the risk that future city councils could alter the plan before it fully kicks in. There should be no doubt that they will take advantage of the proposed “temporary” tip penalty to make every effort to turn it into a permanent feature and to spread it throughout Washington state (which is one of only seven states which does not currently have a tip penalty).

Pressure on the City Council

In contrast, Kshama Sawant is pushing forward the original plan proposed by herself and labor to the Income Inequality Advisory Committee – $15 starting January 1, 2015 for all workers employed by big businesses. Starbucks, McDonald’s, Burger King, Target can afford to pay $15 now – why should they get one more day to pay poverty wages? Sawant’s plan also includes a three-year phase-in for small businesses and non-profits. It rules out including a tip penalties and health care deductions, and the cost of living adjustments would start immediately.

The movement for $15 needs to increase the pressure on the council to:

It’s unclear how quickly the city council will decide on the proposals. The coming days and weeks are decisive to keep up the pressure and win the strongest possible $15.

Last year an initiative in SeaTac won a $15 minimum wage. On Wednesday May 7, supporters of the SeaTac initiative will protest against business’s blocking its implementation through legal challenges. This is an important step to show the City Council and business that we will not allow them to claw back the gains we have won.

On Thursday May 15, fast food workers will be protesting and striking across the country and in Seattle for $15/hour minimum wage.

As well as these events, 15 Now is Seattle is preparing to mobilize low-wage workers and supporters of $15 to make sure our voices are heard throughout the City Council process. This includes mobilizing to collect signatures for a ballot initiative. If the City Council fails to deliver an adequate $15, activists of 15 Now, labor and communities can bring the demand for a living wage to a vote in the November election.

Click here to help the signature gathering or to be part of an Action Group in Seattle, or click here to donate to help 15 Now fight for a living wage for workers.

If you agree there is need to build an on-going movement against the interests of corporate America and the capitalist system, click here to join Socialist Alternative!

Labor and the Left’s Debate on Strategy The Mayor’s proposal has sparked an important debate among Labor and the Left on how to best proceed. The leadership of the Seattle labor movement are mistakenly uncritically supporting the Mayor’s proposal and are unfortunately not looking to throw their weight fully into struggle to improve the proposal.

While Rolf mentions, quoted by KPLU radio, that it was necessary to have a “left flank” and he had “nothing but respect for Sawant and her organization, 15 Now,” he then goes on to say: “But we don’t agree on the strategy.” Rolf continued, “for some period of time, we’ve made it clear we support the concept of a phase-in, we want to reach a compromise, and we believe the best compromise is one with labor and business at the same table joining their hands and advocating to the council.” (KPLU – Seattle Mayor Murray’s Minimum Wage Plan Reveals An Interesting Divide On The Left)

For Socialist Alternative and Kshama Sawant, there is nothing wrong with signing a deal that might not completely reflect our full demands, as long as Labor has used all its tools to push forward an agenda to defend working class families’ living and working conditions. It is Labor that is best positioned to change the balance of forces between the 1% and the rest of society by activating workers themselves.

The question is, has this been done yet?

In our view, the answer is no. The main labor leaders involved believe the Mayor’s proposal needs to be supported and not changed in order to avoid big business stepping in, using their financial power to manipulate public opinion to oppose an increase in the minimum wage – for example, on the ballot in November. But when did appeasement on our side ever stop big business from using all the tools at their disposal to strengthen their position and weaken ours?

We need to rely on our strength and use the debate in Seattle on $15 to help rebuild a fighting workers movement. The strikes of the fast food workers and the trade unions supporting them were absolutely crucial to turn the growing feelings of social injustice – revealed by the Occupy Movement – into action.

Trade unions like the SEIU, UFCW, Unite-Here and others were decisive in winning the SeaTac ballot for a $15 minimum wage. However, labor did not, unfortunately, offer a tool to turn the huge sympathy for the demand for $15 into an organizational force for all workers and young people. Only the election campaign of Kshama Sawant last year and then the launch of 15 Now offered activists and newly-politicized people a way to get engaged and involved, take ownership of the movement and move forward.

Imagine what would be possible in the following months and years if the Labor leaders were to throw their full weight behind the fighting strategy 15 Now and Kshama Sawant have put forward. A national campaign promoted and financially supported by Labor, that workers could join and democratically participate in to fight for $15 all across the country would change the political landscape. Such a campaign could hold mass conferences, like the 15 Now Conference on April 26 in Seattle, mobilizing hundreds and thousands in city after city, discussing and then moving into action. What a powerful tool to rebuild Labor, give direction and hope to the aspirations of workers, and finally start to fight corporate America!

What a contrast to the strategy of too many Labor leaders over the last decades: They have tried to appease big business, tried to get agreements and compromises – in large part without mobilizing, without educating and without organizing working-class and young people.

Did this stop business from increasing their attacks? On the contrary, bosses were encouraged to demand more and more. The extreme accumulation of wealth in the hands of the 1% is the result of their unrelenting battle against the vast majority of people. It’s time to fight back!

In Seattle, Labor, Kshama Sawant, 15 Now and Socialist Alternative together with many community groups and activists have a unique chance: We can use the Mayor’s proposal as a starting point. With a signature gathering campaign, supported by the labor movement, we would have the opportunity to talk to hundreds of thousands of people, educate a whole new layer of activists and change the balance of forces further. The potential is there to win a full $15 – but it will take a vigorous struggle.