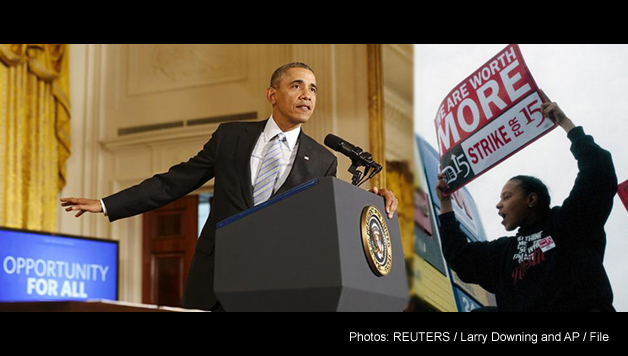 The Democratic Party leadership is staging a series of votes in the Senate on issues that would benefit the “pocketbooks” of working people in the US. The centerpiece is a proposal to raise the federal minimum wage to $10.10/hour phased in over three years.

However, the main motivation for moving these proposals is not the needs of working people. Instead, the Democrats are desperate to mobilize their demoralized voting base for the midterm elections.

More than 46 million people now live in poverty in the US. In 2012, the 1 percent took their largest share of national wealth since 1917. This has spurred a growing discussion in the US, helped by the explosion of Occupy Wall Street in 2011 which introduced the language of the 1 percent and 99 percent.

These historic levels of inequality also present a serious problem for the corporate elite and political establishment. On the one hand, some US capitalists fear for the health of their own economic system, and see raising the minimum wage as a way to jump-start the ailing economy.

“Raising the minimum wage to $15 an hour would inject about $450 billion into the economy each year,” wrote multimillionaire investor Nick Hanauer. “That would give more purchasing power to millions of poor and lower-middle-class Americans, and would stimulate buying, production and hiring.” (“The Capitalist Case for a $15 Minimum Wage,” bloombergview.com, 6/19/13)

On the other hand, the more far-sighted political thinkers among the elite fear the yawning gap between rich and poor could undermine the political establishment and capitalism itself.

“Reform is less risky than revolution, but the longer we wait the more likely it will be the latter,” wrote Robert Reich, former Labor Secretary under President Bill Clinton. With MoveOn.org, Reich has sponsored a petition calling on President Obama to support raising the minimum wage to $15/hour. (robertreich.org, 1/25/14)

However, the vast majority of the 1 percent opposes raising the minimum wage. One of the co-founders of Home Depot, billionaire Ken Langone, compared the Democrats’ increasing talk about inequality to the rhetoric of Nazi Germany! (politico.com, 3/18/14)

Raising the minimum wage to $10.10 over three years is better than nothing. But, $10.10 is hardly enough to live on and will only make a small dent towards addressing the needs of millions living in poverty.

It would take three years for the minimum wage to reach $10.10, and although ultimately a 40 percent increase, the federal minimum wage would still be far lower than it was in 1968 when adjusted for inflation.

If workers’ wages had kept up with tremendous gains in workers’ productivity over the past forty-five years the minimum wage would be more than $20/hour today. In many cities where the cost of living is far too high for workers to scrape by on $10.10/hour, fast-food worker protests and strikes have been demanding $15/hour.

On top of this, the Democratic Party leaders do not have a serious strategy to achieve even a modest increase in the minimum wage. They will hold a few symbolic votes in a dysfunctional Congress with no vision beyond turning out votes for the November midterms.

The minimum wage vote will fail, “but in doing so,” wrote Politico.com, “Democrats can blame Republicans for obstructing poll-tested legislation during an election year and stoke progressive opposition to the GOP.” (3/26/14)

Nearly 70 percent of voters support raising the minimum wage including more than half of all voters who identify as Republicans. The Democratic Party leadership wants to tap this popular support merely to provide a “contrast” with the Republicans.

They cynicism of the Democratic Party is shown wherever they are in power. In Minnesota, where they control the Governor’s office and both houses of the state legislature, the Democrats barely passed a watered down $9.50 minimum wage, phased in over three years and including a long list of exemptions.

Similar legislation or ballot initiatives are being proposed by Democrats in a number of battleground states across the country. These initiatives are more about boosting turnouts for elections, not waging a real fight for the needs of working people.

Even with the popular support for raising the minimum wage in the US, there is no confidence the Democrat’s midterm election strategy will succeed. Obama’s approval ratings remain at one of their lowest levels since he first took office, and populist appeals from the present Democratic leadership ring hollow to many.

Obama recently used his limited executive authority to raise the minimum wage for federal contracts to $10.10 and expand unemployment benefits for new job classifications. But for many people this is too little too late from the president who bailed out Wall Street by the trillions and oversaw the largest expansion of domestic spying in history.

There is widespread disillusionment in the base of the Democratic Party. Millions of workers, young people, women, and people of color – the very people who turned out in high numbers in 2008 and 2012 to vote for Obama – appear likely to stay home this fall.

Incredibly, the Republicans are poised not only to defend their majority in the House, but could even take the majority in the Senate. This does not reflect any growing strength of the Republicans; they have far higher disapproval ratings then the Democrats. In fact, historic levels of anger exist with both parties.

The disappointment with Obama leaves a vacuum in US politics. Because leaders of unions and progressive movements lcontinue to support the Democrats and offer no genuine pro-worker electoral alternative, the space has been left for the right to make gains.

This fact was illustrated in early March when Obama went to Manhattan to promote a $10.10/hour minimum wage. On the same trip Obama collected $1.5 million from two fundraisers hosted by Wall Street executives, the Blackstone Group – one of the largest private investment firms in the world. (NY Times, 3/11/14)

Nowhere are the Democrats seriously prepared to mobilize the mass support for raising the minimum wage. Nowhere are they backing a strategy that could bring the tremendous social power of working people to bear against their big business backers.

In Seattle, where there is strong momentum for raising the minimum wage to $15/hour, the movement is largely outside the control of the Democrats. Last fall, 93,000 people voted for Kshama Sawant of Socialist Alternative for city council. We didn’t take a dime from corporations.

A new organization – 15 Now – has been set up to organize a grassroots campaign in Seattle independent of the Democratic Party. That’s why Seattle is poised to win the strongest minimum wage in the country.

We have the social power to turn the tide against big business and redistribute billions from the profits of the 1 percent to the wages of workers. To unleash our power, we need to break from the big business-dominated Democratic Party, build independent movements, and run our own candidates as a step toward building a new party that fights for the millions, not the millionaires.