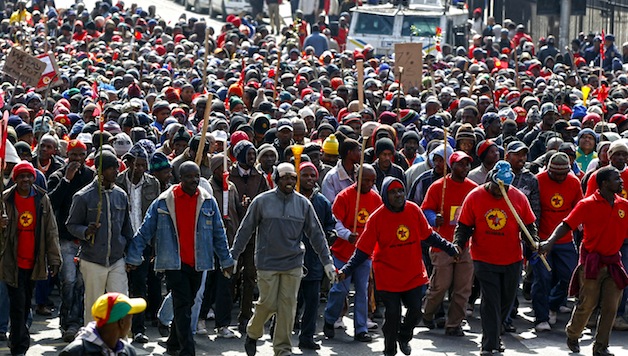 After striking miners were killed in what is known as the “Marikana massacre” of April 16, 2012, tremendous working-class indignation, organization and political consciousness has emerged. The article below was produced in December of 2013 to reflect on the process of rebuilding the fighting capacity of South African unions and the political organization of the working class. Despite the previous heroic role of the African National Congress (ANC) and the recently departed Nelson Mandela, the ANC has become the main ruling party of the South African capitalists, overseeing drastic neoliberal measures and the most unequal society in the world.

Since the Marikana Massacre, the Democratic Socialist Movement (DSM), the affiliate organization of the Committee for a Workers International, has come to the forefront of the struggle.  The DSM, in political solidarity with Socialist Alternative in the US, has, along with miners’ leaders, initiated a new political force called the Workers and Socialist Party (WASP). The statement below is from WASP. It addresses major developments in South Africa’s largest union, the National Union of Metalworkers of South Africa (NUMSA), a component part of the Congress of South African Trade Unions (COSATU), the main union federation.

In what will go down in history as the most important trade union congress since the founding of COSATU in 1985 delegates at the special congress of the National Union of Metalworkers of South Africa have taken the bold and historic decision to cut ties with the ANC. With financial and logistical support for the ANC withheld, the ANC will be entering the 2014 elections without the support of COSATU’s biggest and most politically influential union. Given the support NUMSA enjoys in the rank-and-file of all COSATU affiliates, including those under pro-capitalist leaders, this means that the ANC stands to lose not just the votes of the 340 000 NUMSA members, but potentially more than a million more from the rest of COSATU’s affiliates. The ANC will emerge from the 2014 elections significantly weakened. The less than 50% nightmare scenario of the ANC’s own election strategists cannot be ruled out.

The aftershocks of the earthquake detonated at Marikana that loosened the foundations of the post-apartheid political dispensation put together so cunningly in the negotiated settlement at Codesa, has now found expression on the political plane. To adapt the title of political commentator Allister Spark’s book on perspectives for the country after Codesa, today SA is another country. The golden bars of the political prison in which the working class has been kettled for going on twenty years, have been broken and the process of the class emancipation and political independence of the working class has begun in emphatic fashion.

Additionally, NUMSA will cease financial contributions to the South African Communist Party breaking the political link with this “ideologically bankrupt” party in the words of NUMSA general secretary Irvin Jim.

The anger and sense of betrayal that delegates felt for the ANC and SACP leaderships was on full display throughout the conference. At no point did a single delegate make any serious argument for continuing to support the ANC. In the minds of NUMSA members the reality is clear: the ANC and the SACP are parties of the capitalist class. Everything in their actions over the past twenty years demonstrates this. The next ANC-led government, with the neo-liberal National Development Programme as its centrepiece, will be a consciously anti-working class government and does not deserve the support of the working class.

At this stage, NUMSA has held back from taking a decision to support an alternative party in 2014 and has simply reiterated the right of NUMSA members to vote as individuals according to their convictions. Instead of taking a clear position on 2014 at the congress, NUMSA has taken the decision to launch a “united front” modelled on the United Democratic Front of the 1980s to unite the struggles of workers and communities whilst simultaneously helping to bring into being a “movement for socialism”. WASP, in its open letter to NUMSA made the call for the launching of a socialist trade union network to help overcome the divisions in the working class and the paralysis of united struggle caused by the crisis in COSATU. We also made the call for an Assembly of Working Class Unity to draw up a battle plan for the struggles of the masses. In NUMSA’s decision to launch a United Front and a Movement for Socialism we recognise these calls as broadly met.

However, with the national and provincial elections only months away we invited NUMSA to “take its place in the leadership of WASP”. WASP was launched to unite the struggles of workers, communities and youth and is organised in a democratic and federal way that would have allowed NUMSA to use the WASP umbrella to stand its own candidates, selected by NUMSA’s own procedures. NUMSA could take its opposition to the National Development Plan into the national parliament as an ancillary to the struggles that will be waged in the workplaces and the communities. At NUMSA special congress the leadership laid down criteria that any political party would have to meet in order to warrant political support. These criteria were endorsed by the delegates in the adoption of the secretariat’s report. We believe WASP meets these criteria. WASP was born out of the struggles of the mineworkers and bases itself on the working class; WASP stands for the nationalisation of the mines, the banks, the commercial farms, the factories and other big business on the basis of workers control as part of the struggle for a socialist society; WASP is a thoroughly democratic organisation. As part of the adoption of their new political strategy, the NUMSA leadership was given a mandate to “be alert” to a “party committed to socialism standing for elections in future”. We therefore repeat our call for NUMSA to take its place in the leadership of WASP and support and stand candidates under the WASP umbrella in the 2014 elections as a crucial part of building the new Movement for Socialism.

The limitations of NUMSA’s specific position on the 2014 elections cannot however detract from the monumental shift in the political landscape that NUMSA’s decision heralds. The break-up of the post-1994 political settlement is now well advanced and the path towards the political independence of the working class embarked upon. NUMSA’s decision has accelerated the process begun by the mineworkers in 2012. In recognising the changed political situation post-Marikana that required the convening of a special congress NUMSA has taken this process on to a far more conscious level.

Delegates welcomed survivors and family members of the Marikana massacre and raised an astonishing R200 000 for the families of the slain. This will be topped up to R500 000 by NUMSA’s Investment Company staff and the company itself. The prominence accorded at the congress to the mineworkers’ struggles of 2012, including the Marikana massacre, was NUMSA’s acknowledgment of the role the mineworkers played as the advance guard of the working class in breaking free from the prison of the Tripartite Alliance. The mass exodus from the National Union of Mineworkers was simultaneously the breaking of the political link with the ANC. It was out of this opening battle that the Workers and Socialist Party was born. NUMSA has now fully joined the battle that the mineworkers began.

NUMSA sent a clear signal to mineworkers and other workers that NUMSA will not abandon them to the pro-capitalist misleadership of unions that continue to cling to the ANC. Irvin Jim declared that NUMSA “will no longer reject any worker” in open defiance of COSATU’s “one union, one industry” policy. Jim even lamented that this has not been NUMSA’s policy at the time of Marikana. This will put NUMSA on a collision course with the pro-ANC right-wing of COSATU and almost certainly lead to the break-up of COSATU. The decision to withhold their monthly R800 000 COSATU affiliation fee until the demand for a special congress is met is another bold move.

With plans for rolling mass action in early 2014 and the extension of the hand of solidarity to the mineworkers by the congress – who will most likely be waging new struggles over wages and retrenchments in the new year – means NUMSA will be at the centre of workers’ struggle in the next period. The planned conference for socialism will continue the discussion, begun at the special congress, on building a working class political alternative. NUMSA has taken its first steps into the new landscape they have helped create and alongside WASP and the mineworkers taken up the historic task of rebuilding the political independence of the working class. WASP salutes the NUMSA leadership and the NUMSA delegates for their decision.

WASP will be producing more detailed material and analysis of the tasks faced by the working class in light of the decisions taken at NUMSA’s special congress in the new year. Follow-up articles will appear on socialistworld.net and workerssocialistparty.co.za.