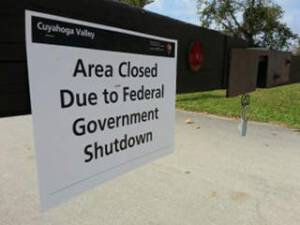 There is a great sense of relief throughout the U.S. both from ordinary working people and from Wall Street that the government is no longer shut down. 800,000 federal employees are returning to work, most of them receiving back pay for their furlough.

Despite what is correctly seen as a defeat for the Tea Party, both Democrats and Republicans are planning massive attacks on popular social programs like Medicare, Medicaid and Social Security as bipartisan discussions begin in December on a new federal budget.

Robert Reich, former labor secretary under President Clinton, writes: “He’s [Obama] already put on the table a way to reduce future Social Security payments by altering the way cost-of-living adjustments are made – using the so-called “chained” consumer price index, which assumes that when prices rise people economize by switching to cheaper alternatives. This makes no sense for seniors, who already spend a disproportionate share of their income on prescription drugs, home healthcare, and medical devices – the prices of which have been rising faster than inflation. [http://robertreich.org/post/64282449366]

These proposed cuts could further undermine the damaged authority of a dysfunctional political system. Also, another similar crisis is scheduled to be unleashed in January and February of 2014.

In a Gallup poll conducted during the shutdown, a record-high 60% said that a new party was needed in the U.S., and a record low 26% said the two parties were doing an adequate job. This reflects a deep polarization in U.S. society. The tremendous vacuum on the left is illustrated by the success of Socialist Alternative’s local electoral campaigns.

The Tea Party politicians, and even some of their big business backers, had been planning this government shutdown well in advance. They felt that this was their last chance to defeat Obamacare, they want to stand firm in favor of ultra-austerity policies and also whip up a right-wing base in gerrymandered districts going into a mid-term election year. Instead they exposed the huge divisions in the Republican Party and the seemingly permanent political crisis of the U.S. ruling class.

The Tea Party was an “astroturf” (fake grassroots) invention of long-time Republican activists, capitalizing on anger at the bank bailouts and disappointment in Obama. They struck a chord in a polarized country and were able to mobilize rallies of mainly white, predominantly suburban and rural, older middle class people. This ideologically-motivated base, disappointed with the relative decline of U.S. power and often uneasy about a sitting black President, shook up Republican primaries in many places, leading to candidates and Congressmen that refuse to reach bipartisan consensus with the rest of the ruling class.

The Tea Party, heavily publicized by the corporate media, was used to shift the debate to the right and to validate austerity. But now they have become discredited. Poll after poll shows how out-of-step the Tea Party is with the vast majority’s views on all key issues. The Occupy movement changed the discussion about the crisis, putting the blame where it belongs, not on government intervention in the economy, but on the ruling class and the inequality that exists.

While Tea Party rhetoric might help Republicans in suburban primaries, it isn’t a viable strategy for either the GOP or their elite backers. Even the Koch brothers, arch-conservative billionaires, issued a statement distancing themselves from the Tea Party’s role in the government shutdown. The same goes for right-wing preacher Pat Robertson.

On the final day before the shutdown, big business heavy hitters came in to convince not only John Boehner, but also the Tea Party politicians to take their gun away from the head of the U.S. economy. Threats to Boehner’s career had been made implicit by the Tea Partiers if he backed down. But now they are trying to contain the battle within the GOP that has gone from a “cold war” to a “shooting war.” Fierce battles are coming in mid-term Republican primaries, possibly fueled by new divisions that may emerge in the budget battles of January and February next year.

Already significant damage has been done to the prestige of U.S. ruling institutions, both in the eyes of workers in the U.S. and in the view of people internationally.

The Tea Party got most of the blame for the shutdown, but people were also angry with all politicians. It was a widely-known and despised fact that Congress was still paying their own salaries while 800,000 were on forced unpaid leave and social programs were shut down resulting in deaths to people needing urgent health care, for instance.

Labor leaders didn’t call a single mass demonstration against the government shutdown, missing a huge opportunity to build support for the unions and an emergency jobs program funded by taxes on the super-rich and big corporations. The anger in society had to be reflected somewhere though. The Tea Party tried to mobilize truckers to shut down the roadways around Washington, D.C. to capitalize on the frustration and direct it at Democrats; this failed miserably.

Liberal TV commentator Dylan Ratigan on MSNBC stepped in with a rant that seemed inspired and off-the-cuff. His radical five-minute speech was watched by millions and shared by hundreds of thousands on FaceBook.

Ratigan said “tens of trillions of dollars are being extracted from the United States of America by…a financial system, trading system, taxing system, set up by both parties…This Congress is BOUGHT!…Get the money out of politics!…The banking system is fully corrupt and defrauding us!” While stopping short of calling for a new party for the 99% or democratic socialism, the fact that this radical rant went viral is telling of the mood that is developing.

Passing a federal budget will now be referred to a Congressional committee which will make decisions in the coming weeks. Obama and Democratic Party leaders have already made it clear that they’re willing to agree to attacks on the key social programs of the “New Deal” and “Great Society”, enacted because of the mass movements of workers, the oppressed and young people. Obama even went so far as to say that he wants to cut the corporate tax rate.

While there is huge relief, and many people want the politicians to “put their differences aside and do their jobs,” the problem is that the agenda of the two parties is not in the interests of working people and the poor, but instead is based on conflicting approaches on how to implement pro-capitalist policies. Any bipartisan budget agreement will once again target essential programs like Medicare and Social Security, rather than taxing the massive wealth of the super-rich elite. One can expect to see further disappointment with the Democrats if these cuts are carried out.

There are huge opportunities for the labor movement and the left to affect this discussion. Recent polls, the radical nature of the MSNBC rant, the previous popularity of the Occupy movement, and the determined struggles of low-wage workers—all these things point to a massive opening which the left needs to boldly grasp.

Socialist Alternative has shown how this can be achieved with its dynamic political campaigns in Seattle and Minneapolis. We need other fighters for working people to step up in the 2014 mid-term elections at the national and local level.

We need teachers’ union candidates fighting against cuts and privatization in education; homeowners facing foreclosure running to demand big banks and cops stop the evictions; low-wage workers’ leaders running against corporate politicians; activists who organize against sexism, racism and homophobia to break from the two parties of big business.

More than ever, this crisis shows how Wall Street has two parties and we need one of our own. Two-hundred independent candidates of the 99% in 2014 would be a huge step in this direction. Candidates connected to movements on the ground, candidates that refuse to be bought, candidates with a program to fight for and with working people, youth and the poor.

Education Under Attack: Defund the Police and Tax the Rich to Fund Our Schools