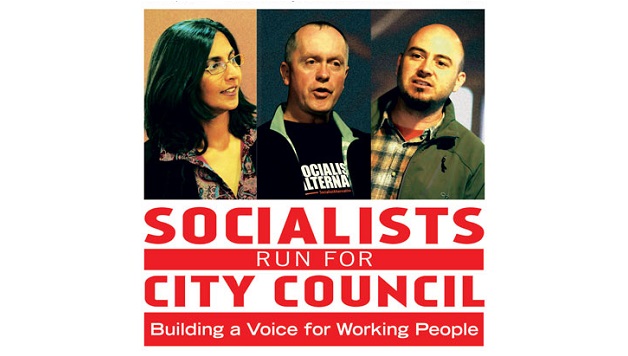 Socialist Alternative members are running for elected office in three cities this fall: Seattle, Minneapolis, and Boston. They are running to use the platform afforded by the elections to give voice to working-class anger against what the 1% are doing to this country, and to popularize socialist ideas and especially the idea of a real left challenge to corporate politics.

If elected to office, they will use their positions to assist every genuine struggle involving workers, young people, immigrants, people of color, or any other oppressed group and to fight for every possible reform that will improve the lives of ordinary people.

However, Socialist Alternative does not believe for a minute that one socialist city councilor, or even several independent left councilors, in a given city would be able to fundamentally change the balance of power. Even enacting basic reforms will require real mass campaigns and social struggles that bring enormous pressure to bear on the ruling elite and the city council as a whole. A genuine socialist councilor would be the voice of those campaigns and struggles inside the council chamber, making that pressure that much harder for the capitalist political establishment to ignore.

In Minneapolis, Ty Moore, a Socialist Alternative candidate and prominent Occupy Homes activist, is running for city council in a ward with an ongoing and very effective Occupy Homes campaign. As a councilor, Ty has pledged to do everything possible to use his influence to help extend the campaign even further, to push for a moratorium on further foreclosures in Minneapolis, and to push for a ban on using the Minneapolis police to carry out banks’ evictions.

But while having a socialist councilor will clearly be a very real victory for the Occupy Homes movement, at the end of the day the strength of the campaign on the ground is the key factor.

How to Win Real Change

As socialists, we understand that the real power in society is held by giant corporations who are in no way accountable to ordinary people. City councils, state legislatures, and Congress are political institutions that operate within the framework of the capitalist system, where working people’s interests are subordinated to corporate profits.

That does not mean that real reforms are unachievable. For example, in the past the labor movement through mass struggle achieved the eight-hour day, Social Security, as well as health benefits and pensions for tens of millions of workers.

Yet all of these gains are now under ferocious attack today from both Republicans and Democrats. This shows that no reforms are permanent under this system. We can – and must – fight for every possible reform under this system, but these reforms will only be established on a secure basis if the undemocratic power of the capitalist class is broken and a new socialist society is established.

Nevertheless, faced with sufficiently well-organized resistance, for example by workers prepared to use mass demonstrations, civil disobedience, and strike action to back up their demands, it is possible to force the bosses and their politicians to (temporarily) back down.

This was demonstrated in the strike last fall by the Chicago Teachers Union (CTU), which forced that city’s odious Democratic mayor, Rahm Emmanuel, to back off on some aspects of his attacks on public education and the union. The CTU is now correctly discussing how to take its challenge to Rahm into the political arena. It would be a tremendous step forward if they stood candidates, independent of the Democrats, on an anti-austerity, pro-working people program.

Socialist Alternative is in political solidarity with the Committee for a Workers International, which has a proud history of participating in and leading workers’ struggles and has stood genuine socialist candidates in countries from Sweden to Sri Lanka.

Our candidates take only the average workers’ wage because to do otherwise would be to lose connection with the realities facing the people they represent. Our councilors and members of parliament do not decide on policy on their own. Rather, they represent the positions democratically decided by the members of our party and consult with the movements and campaigns in their areas.

We do not agree with those who say that leftists who enter capitalist elected bodies will inevitably be corrupted, but that is only because we make absolutely sure that our public representatives are accountable to the working people and the party that sent them to these bodies, as well as having a crystal clear understanding of the realities of capitalism and the necessity of a socialist transformation of society.

In Liverpool, England in the mid-1980s, our sister organization played the leading role in the establishment of a socialist majority on the city council. At the time, there were huge class battles culminating in the heroic British miners’ strike where the workers faced a ferocious onslaught from the hated Thatcher government. The Liverpool socialist council, backed up by mass demonstrations and strikes of the city’s workers, refused to impose cuts as dictated by the Thatcher government and in fact brought in a range of reforms for ordinary people despite Thatcher’s best efforts to shut the council down.

In Ireland a decade later, our organization in Dublin led a mass campaign of non-payment of a hated water tax that was double taxation on ordinary people. The campaign chose to take its struggle into the political arena and run candidates against the establishment parties. The key public spokesperson of the campaign, Joe Higgins of the Socialist Party, was elected to the Irish parliament in 1997. This was in reality the culmination of the campaign and the water tax was repealed.

If Ty Moore, Kshama Sawant, or Seamus Whelan is elected this November, it will be a very significant political event. Of course, in and of itself socialists winning one or two council seats will in no way change the fundamental political balance of forces in U.S. society or even in the local area.

But Kshama Sawant’s tremendous 44,000 votes in the primary and the results in November, win or lose, will demonstrate that socialists can credibly take on pro-corporate politicians at a local level. If this leads to more groups and individuals following our path in 2014, it will be a real contribution to rebuilding a credible left in the U.S. And in Seattle, Minneapolis, and Boston, it will help raise the sights of tens of thousands of working people that a new type of politics that truly represents them is possible.