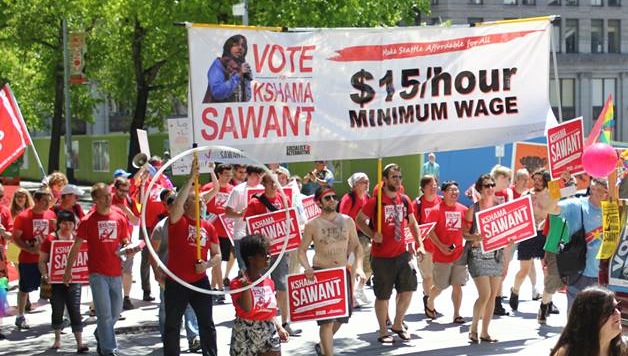 Sawant is running for City Council position 2 against 16-year incumbent Richard Conlin who has consistently supported the interests of corporations over working people. From being the sole vote against mandatory sick leave, to advocating redlining for the poor, to voting for criminalization of panhandling, Conlin has proven himself a reliable and loyal candidate of the downtown business establishment.

Sawant is calling for a citywide minimum wage of $15/hr, affordable housing through rent control, and a democratically elected civilian oversight committee to hold the Seattle Police accountable.

“I wholeheartedly accept these endorsements. They point to the burning need for the labor movement to end its abusive relationship with the Democratic Party and instead build an independent political movement that represents working people. When will the rest of Seattle’s labor leaders wake up to the reality that the very politicians they routinely endorse defend big business, not workers and the poor?”

Sawant is an economics professor at Seattle Central Community College and a member of AFT Local 1789. She played a leading role in bringing the Occupy Seattle encampment to her college campus, and speaking out against cuts to education and the declining living standards of teachers.

The endorsement from the AFT union board followed a unanimous recommendation for Sawant by a straw poll of the membership. “This is a wonderful moment for me, to have this vote of confidence from my union brothers and sisters. Teachers in the Seattle community colleges have not received cost of living increases in years and many struggle with part-time jobs and low pay. I will take this fight forward, against education cuts, layoffs, and for decent wages.”