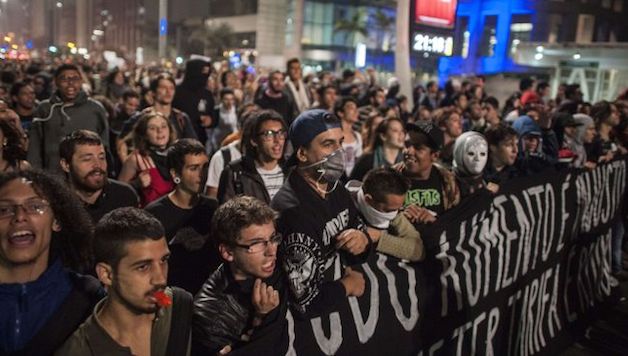 Governors of São Paulo, Rio de Janeiro, and many other cities cut transport fares but the struggle must continue. Following the tsunami of mass struggles during recent days, the state government of São Paulo, the prefects of São Paulo and Rio de Janeiro, the two largest cities in Brazil, along with dozens of state capitals and cities throughout the country, have decided to reduce transport fares.

The reduction in fares, by twenty centavos in the case of São Paulo, in so many cities, represents the most significant victory for the mass struggle after suffering almost twenty years of a neo-liberal offensive by the ruling class against the workers and the people.

Intransigent, authoritarian and repressive state governments have been compelled to do an about turn in the face of two weeks of intense mass mobilisations, which have swept through the entire country. On 17 June more than 300,000 people took to the streets in various cities. Almost 200,000 marched in São Paulo and Rio – the highest concentration of the mobilisations. In Brasilia, the Congress was occupied, as was the city Hall in São Paulo. In São Paulo protests paralysed the main highways and marched to Ponte Estaiada, a monument to rich property speculators. Following brutal police repression the preceding week, which triggered even bigger protests, on the 17th June the state governor decided against further repression.

In Rio de Janeiro, however, there was strong repression and numerous arrests. Amongst them was a member of LSR (CWI Brazil). The comrade was charged with being a ‘member of an organised criminal gang’ and released on payment of a fine. In Belo Horizonte (in the state of Minas Gerais) ,where a football match for the Copa das Confereacoes was taking place in a new modern stadium, more people protested outside the venue than watch the game inside.

A further demonstration in São Paulo called the following day, on 18 June, was attended by 80,000 people, which completely took over Praca da Sé Square in the city centre. At the same time, protests took place in Avenida Paulista, where disorganised attempts were made to take over the city hall and also the office of the city Prefect. In Rio de Janeiro, on the previous day, the offices of the state Legislative Assembly were taken over for hours by protestors in such a way that it was clearly a genuine popular rebellion.

Throughout the following day, on 19 June, radicalised mass protests took place. Motorways were blocked and closed, bus station were blockaded and large street marches were held by the MSTS (Movement of Workers Without Roofs) with the active participation of comrades from the LSR (CWI Brazil), in the outskirts of São Paulo. There were indications that the struggle was radicalising and beginning to explode in the poor areas around the city, involving workers, which put added pressure on the government.

Following the calling of new unified protests, on a national level, on 20 June, the governing authorities in São Paulo and Rio decided to announce a reduction in fares. This arose following major debates and divisions within the governing parties. An emergency meeting was organised involving Lula (Brazil’s ex-President, who officially has no position), President Dilma Rouseff and the Prefect of São Paulo, Fernando Haddad. During this meeting, the Prefectura was surrounded by protesters.

The following morning, Haddad declared that a reduction in transport tariffs would be a ‘populist’ position to adopt. His argument however did not last long. At a football match between Mexico and Brazil, in Fortaleza, where the stadium was surrounded by protestors, a press conference was organised by Haddad and the governor of São Paulo, Alkmin, a member of the right-wing PSDB (which is in opposition to the federal government). Haddad and Alkmin announced that a reduction in fares would be implemented.

With the transformation of the PT (Workers Party) into a capitalist party and as the trade union confederation, CUT, has become a transmission belt for the federal government, amongst wide layers in the protest movement there is a strong anti-party sentiment. In this situation, sectors of the organised right-wing have whipped up a strong anti-party mood directed against the left-wing political parties present on the protests.

The anti-party mood has often translated into physical attacks against those who carried Left-wing party banners and flags. This has often arisen following the actions of right-wing provocateurs, including police infiltrators. Given the dimension of this mass movement, all political forces in the country, including the federal government representatives and representatives of the employers, have tried to cynically take up the idealism of youth on these mobilisations. In reality, the Brazilian capitalist class has entered the struggle and is challenging for the leadership of the movement, reflecting some of the demands of the movement.

In this situation, the left parties (PSOL and its internal currents, the PSTU and PCB), the social movements with a class orientation, like the MTST and Terra Livre (which the LSR actively collaborates with), various trade union fronts, like CSP-Conlutas and Intersindical and others, including anarchist groupings, are now beginning to join the protest movement. This is centring on the demonstrations for 20 June, defending the right of the left parties to raise their banners on the protests and is aimed at preventing the right-wing gaining an influence in the movement.

Despite the contradictory elements in the political consciousness of those in this movement, it has been able to score a victory and force a reduction in the transport charges. It has now raised the question of the movement continuing. There is not agreement between the combative social movements and the Left on this question. The national protests called for the 20 June could become a commemoration of what has been achieved rather than a step to take the movement forward.

The LSR is calling for organised assemblies and forums of the movement to work out demands and a programme to deepen the gains already won in relation to public transport costs. The governments that have announced a reduction in transport costs are also announcing further cuts in social programmes. The movement should demand that the money is taken from the accounts of the private companies that operate the transport system and not from other social programmes. Even with a reduction in transport costs the high cost of travel is a heavy burden for workers and students. The demand for free transport was one of old demands of the PT which the party abandoned as it swung to the right. This demand should be taken up again. It should also be linked with the demand for the municipalisation and nationalisation of the transport system.

The resources to guarantee this system and improve its quality should be taken from suspending the payment of debts by the state and local councils to the federal government, which are currently used to make easy profits by the banks and speculators.

Movement needs to link up with other struggles

To take up the struggle for a public transport system that is free and good quality, the movement needs to link up with other struggles that have arisen and the demands of workers, the youth and the people to the cities. Struggles like the campaign against the crimes of the preparation around next year’s football World Cup, which include driving of thousands of families from their homes. Millions of Reales are being spent on building new stadiums and other infrastructure projects for the World Cup yet schools, education and hospitals are inadequate and precarious. There is also the need to take up the demand to defend democratic rights, to free expression and for the right to demonstrate. The World Cup means, in reality, the declaration of a state of emergency. In practice, it means criminalising poverty and social protest movements.

The Brazilian ruling class is now preparing the conditions for a general strike. The question of a 24 hour general strike is to be posed sooner or later if the movement is to be maintained and strengthened.

There is an urgent need to build a united front of the social and left political movements in the short term. Linked to this we need to fight for a national assembly of workers, youth and the communities, to discuss a programme for the continuation of the struggle and the action needed to fight for it. A new page has opened of the class struggle in Brazil. After a long time we have come out of the desert of years of neo-liberalism and down turn in social struggle. We must not lose this opportunity.