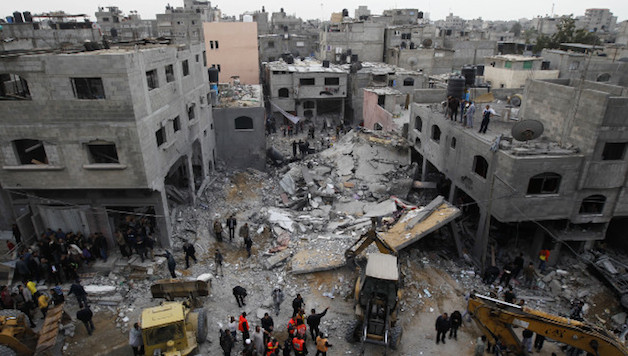 The Israeli government has declared that its shocking and brutal assault on the Gaza strip, “Operation Pillar of Defence,” will be a “widespread campaign” and threatens “protracted conflict.” Among its opening strikes was the assassination of the military leader of Islamist party Hamas, Ahmed Jabari, and more than ten other Palestinians, as a terrifying rain of missiles was fired from the air.

Already, some governments, including, for example, Britain, through its foreign secretary, William Hague, are blaming Hamas as bearing “principal responsibility” because of rocket fire from Gaza. Clearly, they are preparing to repeat the western powers’ silence during the Israeli regime’s previous assault on Gaza, “Operation Cast Lead,” in 2008-09.

“I am responsible for us choosing the right time to exact the heaviest price and so be it,” was the chilling message of Israeli prime minister Benjamin Netanyahu. Palestinians fear a repeat of Cast Lead’s bombardment and invasion of Gaza, when nearly 1,400 people were slaughtered, including 314 children, and are in a state of terror and panic. There are ominous signs that a ground invasion is being considered, with Israeli soldiers’ leave cancelled and some reservists called up.

As well as the terrible toll of Palestinian deaths and injuries, following the killing of Jabari three Israeli civilians were killed in the Israeli town of Kiryat Malakhi when their building was hit by a Palestinian missile. Netanyahu and Co knew that their assault would bring this kind of response; however, their aim was not to encourage peace and security for Israelis or Palestinians but to serve their own interests.

In a statement issued on 14 November, the Socialist Struggle Movement (the CWI section in Israel/Palestine) explained that a key factor in the timing of this assault is the Israeli government’s attempt to boost its support prior to the general election scheduled for January. It wishes to appear to be fortifying security in Israel. In recent weeks, opinion polls have shown that Likud Beytenu, the newly merged party formed by Netanyahu and Lieberman, was losing support.

So, the Socialist Struggle Movement argued, “the capitalist government of Netanyahu is making desperate efforts to change the agenda of the election scheduled for January in order to marginalize the burning social problems, which Lieberman said he’s ‘sick of hearing all the cries about’. The assassinations by the government in recent months had a central part in the escalation of the conflicts in the south and Gaza.

“The government’s decision to respond to straying shells from the Syrian civil war by returning fire, and maximizing the threats of retaliatory military action alongside the threats of punitive action against the [West Bank] Palestinian Authority as well, are part of the election campaign of failing nationalist politicians. They fear losing their seats and are willing to gamble the lives of ordinary Israelis.

“The government hopes to deepen even further the divide between the Israelis and the Palestinians in an attempt to win more votes. However, this is a particularly big gamble that could definitely get out of the control of Netanyahu, Lieberman and Barak. It is still not clear at this stage what will be the scale of the air strikes in Gaza on one hand (it is declared to last at least several days) and the response of the Palestinian militias in Gaza on the other. A number of children and teenagers in Gaza have already paid with their lives in the passing week for the cruel election campaign of Likud Beytenu and Security Minister Barak, and today, 14 November, another baby and a small girl innocent of any crime were killed.”

Leaders of the main Israeli ‘opposition’ parties Yachimovich (Labour), Lapid (Yesh Atid) and Mofaz (Kadima) were quick to stand by the government and speak in one voice, without any hint of reservation, as they do not even pretend to offer any real alternative to the narrow, mad and dangerous agenda of the current government.

In addition to their re-election aims, the Israeli leaders want to cut across the revival of a Palestinian bid for UN recognition later this month, pre-empt any pressure for peace talks from the re-elected President Obama in the U.S. and try to counter any strengthening of Hamas as a result of the major changes and tensions in the region  in Egypt, Syria, Lebanon, etc.

The Socialist Struggle Movement argued that the Israeli government is gambling that the offensive on Gaza would not produce sharp regional and international protests. The government hopes to exploit the Syrian civil war and the growing tension in Lebanon in order to strike a blow against Hamas in Gaza. But the developments in Syria and Lebanon will not be necessarily prevent the possible development of significant protests in Egypt with the call to defend the residents of the Strip against another bloodbath on the lines of 2008-09s Operation Cast Lead.

But Netanyahu, Lieberman and Baraks blood-filled strategy can spiral out of their control and rebound on them by massively inflaming relations between countries and the situations within them; already there are protests and demonstrations breaking out across the Arab countries and worldwide, as well as in the Palestinian territories. In Egypt, which shares a border with Gaza, a call to defend the residents of Gaza is being made on demonstrations.

Inside Israel, the Socialist Struggle Movement immediately argued that opposition to the war plans of Netanyahu, Barak and Lieberman could and should be organized, also inside Israel and in the Palestinian Territories, in order to prevent a sharper escalation in the military conflict. Initial protest steps have begun to be organized and they should be widened.

As well as calling for protest demonstrations, Socialist Struggle Movement is calling for the Israeli workers organisations, including the Histadrut trade union federation and the social movements, to publicly denounce the offensive and to initiate and take part in protests against it.

Coronavirus Crisis in Gaza: Pandemic in Conditions of Siege, Poverty and Overcrowding

Anti-Semitism: What It Is And How To Fight It