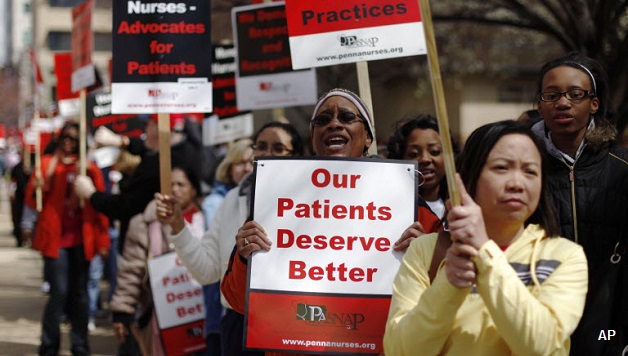 1,000 nurses and 500 professional/technical workers at Temple University Hospital struck on March 31 after working without a contract for the last six months. The workers are represented by the Pennsylvania Association of Staff Nurses and Allied Professionals (PASNAP).

The official hospital position has not moved from the “last, best, and final” offer it presented to the union in September, which includes concessions on union rights, wages, and health insurance. Most infuriating to workers is the non-disparagement clause, which states that union members may not say anything ”negative” about the hospital, its medical staff, or its care in any public forum. In defense of the gag clause, management’s lead negotiator told the bargaining committee, ”You want your Constitutional rights, go somewhere else!”

Further, the hospital refuses to negotiate staffing levels with the union, insisting they have no legal obligation to do so. Adequate staffing is critical to safe patient care, and the committed, professional PASNAP members want to be assured they will have the staff to provide that care.

This struggle is an expression of an ongoing battle nursing staff and other hospital workers are waging to push back the offensive of hospital owners and administrators to make health care cheaper on the backs of the workers who provide health care.

Though the union provided the required 10-day notice before the strike, the hospital made no effort to transfer patients, to curtail admissions, or to defer elective procedures. Instead, Temple declared it would provide all services without interruption using scab labor. Apparently, not everything went as planned. Hospital administrators spent day one of the strike calling workers at home and informing them of their rights to report to work under the terms of the last, best, and final offer. Anyone crossing the picket line will be taking a pay cut to work alongside scabs making up to $10,000 per week.

This Is About Power

Striking health care workers cannot simply stop production. Our work must be done, or patients will die. PASNAP launched a competent campaign aimed at local, state, and national elected officials, other unions, students, and community groups. The core of the campaign is the picket line and demonstrations to build support and solidarity.

The new National Nurses United union and nurses associations from Massachusetts, Minnesota, California, and Michigan have all sent members with messages of solidarity and material support.

Speaking in front of the hospital before the strike, AFL-CIO President Rich Trumka said that : “We will not allow Temple Hospital to thumb their noses at these workers or the union movement.” Locally, several unions, including firefighters and police have supported our strike.

The Temple University Student Senate voted to support the union, and members of the school’s Student Labor Action Project as well as high school students have been a welcome, vocal presence at many PASNAP events.

Temple administration forced this strike. At one of her ”town meetings” before the strike, the Interim CEO stated flatly: “If they want to walk out, the door’s wide open.”

Temple will spend the equivalent of the four-year union contract to pay scab labor during the first two weeks of the strike. Settling with the union, even on the union’s terms, is the cheapest thing the hospital could do. This is not about the money. It is about power. Once they have the power, the money will follow. They consider the money they will spend on the strike a worthwhile investment in their non-union future. We will stand united and outside until Temple administration offers us a contract that will protect patients and our rights.

This is why we strike, not for a few dollars that we will never recoup, but to defend our patients, our professions, and our union brothers and sisters.

Every hospital, every employer in this city is watching this strike. Nursing and the allied health professions have been the go-to jobs over the last 15 years. When skilled workers got laid off, when plants closed, it was off to nursing school to retrain for a growth industry. If Temple takes us down, many more setbacks will follow, and it will be a long, slow climb out of the pit the employers have dug for workers and the union movement.

Strikers, their families and friends, complete strangers, our union brothers and sisters, and students have shown their support and their determination to resist the hospital’s arrogant demands for concessions that undermine the power of the union and our living standards. Workers across the nation and across industries face the same concerted assault by their employers. We need to link the struggles and spread the idea that it is necessary to create solidarity and to build a fighting and democratic labor movement to win our struggles.