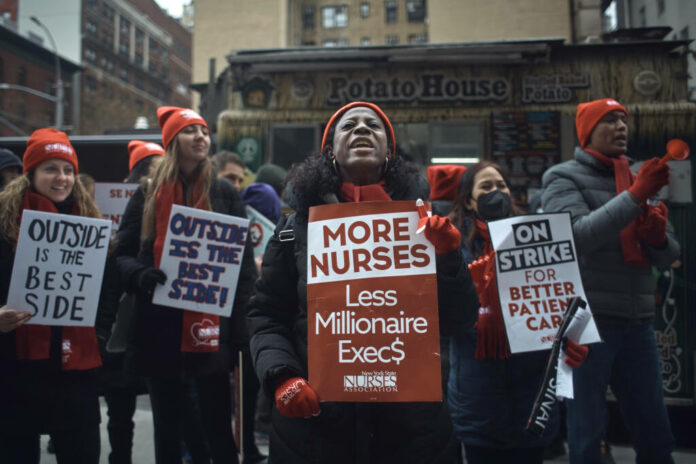 In the early hours of Thursday, January 12th, more than 7,000 New York City nurses at two key private hospitals, Mt. Sinai and Montefiore, ended a three-day strike after their union, the New York State Nurses Association (NYSNA) signed a Tentative Agreement (TA) which included a 19% raise over three years and a stronger language that binds hospitals to a 4-1 patient-to-nurse staff ratio.

Another 7,000 NYSNA nurses at other hospitals had already accepted tentative agreements at the last minute, narrowly avoiding a strike. There was clear dissatisfaction at the vague language on staffing ratios at New York Presbyterian where nurses voted 43% against the TA. This probably factored in the union leadership’s decision to call nurses out rather than trying to push through a weaker deal at these two hospitals.

However, by going on strike, nurses at Mount Sinai Hospital and Montefiore Medical Center forced management to make some concessions on their main demand around staffing. The lesson is clear – nurses prepared to fight and when they did, they won better conditions.

We should also be clear though that the overall staffing crisis at hospitals cannot simply be solved by a contract language which hospitals will continuously try to go around. What we need is an ongoing campaign for mass investment in health care, something that the profit-driven hospitals refuse to do in the long-run.

More could have been won if the union had taken all 16,000 nurses they represented at area hospitals out together instead of making separate deals and withdrawing strike notices at one hospital after another.

Such a move would have prevented a situation where nurses at some hospitals, albeit large ones, were isolated from those who went back to work, which weakened their position. The union could have then sought to play hospital managements against each other and having won a concession in one hospital then demand it from the rest before ending the strike. Another way to strengthen the nurses power would’ve been to provide space for them to discuss, debate, and vote on the agreements, as well as keeping the picket lines in place until nurses voted to end the strike. Having said that, getting stronger language into the contract was a real victory, albeit a partial one.

The early stages of COVID-19 put front and center the role that the working class plays in society. Nothing runs and no profit can be made without us. This reality, on top of low unemployment rates, pushed workers to boldly demand better working conditions and salaries. Nowhere was the situation more acute than in the bureaucratic and dysfunctional U.S. for-profit health care system, which was faced with waves of patients suffering from the virus.

New York City was an early epicenter of COVID-19, with more than 44,000 deaths, an overworked health care workforce, and insufficient resources. Nurses were hailed as heroes by society but treated like robots by the hospitals. On the Mount Sinai picket line, they reported to us that they experienced unbearable burnout, sometimes treating up to 20 patients at a time. Under these conditions, Mount Sinai is not a place where nurses want to remain long term, and instead try to move to a new hospital after receiving their training there, so staff turnover is very high, and hospital administration struggles to fill hundreds of vacant nursing positions. For these reasons, NYSNA launched the “Respect and Retain our Heroes” campaign to create better conditions for nurses to keep their job.

We have seen a wave of labor struggles across the country in the past two years with new unions formed and workers defying what they view as weak proposals from management and union leaderships. Health care workers, too, stepped into struggle, not the least with the St. Vincent nurses strike in Worcester, Massachusetts and the Minnesota Nurses strike, the largest nurses strike in U.S. history while 100,000 nurses in Britain recently went out on the largest strike in the history of the National Health Service. Not surprisingly, nurses around the world went on strike around the same demand – for better working conditions, especially better staffing ratios, to be able to better treat their patients.

With the widespread sympathy from the working class and huge anger in their ranks, NYSNA had the opportunity to win demands around hiring and retaining nurses. With an absolutely overwhelming 98.8% strike authorization vote, the union declared an open-ended strike at midnight last Sunday.

Democrat Governor Steps In To Stop The Strike

In a move aimed to stop the strike – shortly after the Democrats in Congress prevented railway workers from striking – New York Governor Kathy Hochul stepped in a day before the strike deadline to propose binding arbitration. This meant, in effect, that an “objective” arbitrator would decide whether the bosses or the workers are right in their demands. NYSNA correctly rejected the proposal, which would have taken the power away from the nurses. We can have no faith in an outside figure appointed by the government to decide the fate of thousands of nurses. Undoubtedly, such an undemocratic move would have enraged the nurses.

From The Picket Line

Socialist Alternative members attended pickets on all three days of the strike. The energy was electrifying, with nurses having no illusions in appealing to the conscience of their ultra-rich bosses. Over a thousand energetic nurses were chanting “this is about patient care” from the early morning of Monday through the end of the strike, with many of those we spoke with committed to go all the way until their demands were met.

At the pickets, Socialist Alternative put forward the idea of fighting for COLA (Cost of Living Adjustment) plus 1% increase in salary. We also raised the need for the union to use its support and call for other trade unionists to join the pickets, as well as building for mass rallies.

While the picket at Mt. Sinai on the Upper East Side was very large and energetic, we also learned that no pickets were organized at the Astoria, Queens location, with nurses from that hospital going to the main campus instead. We think that building pickets at every single location where nurses walked out would have strengthened the strike even more.

We also heard from nurses about the hospital hiring agency nurses to try to break the strike, paying them far more than what they are willing to pay their full time staff. A strategy of escalation to combat this practice would have increased the power that nurses have to fight for their rights.

While safe staffing was the main demand, the 19% over three years (a little over 7%, 6%, and 5%) raises are also significant. Although they don’t match up to this year’s inflation, they are crucial for retaining the workforce. However, we need to continue fighting to build a movement to win more, such as higher benefits, easier hours, and cancellation of student debt.

We Shouldn’t Need To Fight For Basic Rights Forever

The 2022 contract battle and the strike that followed exposed, yet again, the massive mismanagement and waste inherited in the health care system. However, the real roots of this mess are in the fact that it is run for profit as part of a capitalist system where nothing, including treating the sick, has the right to exist unless someone else gets rich from it.

Every victory under capitalism is temporary. Under new conditions, hospital bosses will try to increase their profits on the backs of the hospital workers. This is why even a battle over one workplace contract has to be tied into a battle for a society where health care is not an industry, but a right. We have enough wealth, workers, science, and technology, to provide high-quality, free health care to the whole world population. Instead, insurance companies, pharmaceuticals, private hospitals, lobbyists, and many others are lining their pockets while health care deteriorates.

Society’s resources should be turned towards patient-care and quality working conditions. For that to happen, we need to fight for a Medicare for All system as a step towards  fully publicly owned health care. This points towards the need for a socialist society where all workers have democratic control over their workplace and run it in the interest of all, not of a greedy few. As the nurses chanted repeatedly on the picket line: “patients over profit!”