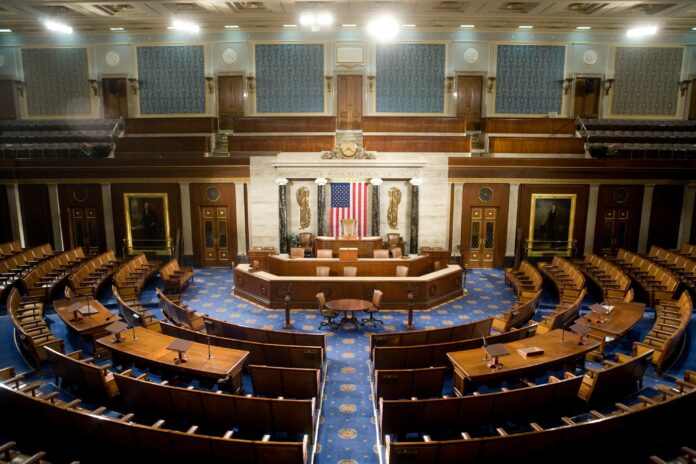 When Trump was running for office, he was lambasted by liberals for his protectionist America First policies. On Trump’s foreign policy positions, Hillary Clinton said, “None of what Donald Trump is offering will make America stronger at home.”

Fast forward six years and Joe Biden is carrying out a continuation of Trump’s protectionism, albeit in a less bombastic way.

Under Trump, the average U.S. tariff on Chinese imports went from three percent to twenty percent. Biden has upheld the high tariffs and expressed zero interest in walking them back. The Economist wrote, “the Biden approach looks less like a retreat from Mr. Trump’s brawl with China and more like a professionalization of it.”

The focus of Biden’s economic war on China has been limiting the Chinese regime’s ability to fully corner the market on semiconductors – advanced microchips that are the “brains” of most modern technology. Trump started this process, and Biden has massively escalated it.

A motivating goal for the American ruling class is putting China permanently behind the U.S. in the high tech sector, a key arena for this being in the realm of military technology. Despite Trump and Biden’s best efforts to erect a wall between the Chinese regime and advanced semiconductors, they have found workaround after workaround. The CCP regime reached a new breakthrough last summer when they made a semiconductor with circuits 10,000 times thinner than human hair, making it comparable to the chips produced in Taiwan.

This prompted Biden to take Trump’s protectionism a step further, not only pushing the CHIPS Act through Congress and signing it in August, but also enacting a new export controls policy in October.

He effectively banned the sale of advanced semiconductors made with U.S. inputs to any entity within China and also forbade any U.S. person (citizen or green card holder) from working in the Chinese semiconductor industry.

Biden’s own “America First” protectionism is threatening transatlantic allegiances. In his recent visit to the U.S., French President Emmanuel Macron told “Good Morning America”: “The Inflation Reduction Act and the CHIPS Act are choices that fragment the West because they create such differences between the U.S. and Europe.”

Biden’s protectionism, especially in the context of the war in Ukraine which has triggered an energy crisis across Europe, has drummed up growing frustration from European allies who are accusing the president of propping up American industry to the detriment of European production.

The fact that Biden and Trump’s priorities in the New Cold War with China look, on paper, quite similar is proof that the Oval Office is, more than anything, headquarters for the interests of U.S. imperialism.

The rivalry between the U.S. and China is increasingly becoming the axis around which all world events revolve. The magnitude of crises facing the world right now are only accelerating this process, from COVID to the war in Ukraine.

Overseeing crisis after crisis has not been straightforward for either party of U.S. capitalism, the Democrats or Republicans. They have both faced foundation-shaking insurgencies since 2015, with Bernie Sanders vying for the Democratic nomination for president (twice) and Trump capturing the leadership of the Republican Party in 2016.

Now, after a midterm result that was not quite as brutal for the Democrats as expected (which is somehow a supposed “win” in our political system) it’s worth looking at the state of these two parties, their “insurgent” wings, and who is really in control now.

In October, Socialist Alternative wrote: “By failing to take into account just how unpopular these attacks [on abortion rights] are to most voters across the country, Republicans will soon find that this ‘win’ will cost them electorally.”

This prediction was borne out just a month later when Republicans dramatically underperformed in the midterms, provoking a crisis within the party’s leadership over what strategy can deliver them gains in the 2024 elections.

It is without question that Trump has been weakened, both in the form of electoral defeats for his candidates, but also in the way those defeats have empowered other high-profile Republicans to blame him for the party’s overall losses. But this is far from the liberal fairytale that this means the end of Trumpism.

In fact, Trumpism as a phenomenon continues to be reinforced by events. The Democrats’ recent decision to crush the rail workers’ strike is proof of this as it allowed space for Republicans like Josh Hawley to pose as “defenders of rail workers” by voting “no.” With a global economic crisis soon to reach the shores of the U.S., the Democrats’ betrayals will almost certainly accelerate, driving working people into the arms of right-populism. The “Never Trump” wing of the Republican party was absolutely crushed in the midterms, leaving no real ideological counterweight to Trumpism.

So, Trumpism is still very much the dominant ideological driver within the Republican Party, but the balance in the party has been disrupted and it’s not clear who’s “leading it.” Trump himself has been damaged by his fixation on increasingly conspiratorial ideas, and this damage is then reinforced by his courting far-right figures like Nick Fuentes.

That being said, it is entirely possible that he will be able to claw back authority going into the 2024 elections – especially in the absence of a compelling figure to replace him. And it’s certain that if it’s not Trump in charge, there will be someone equally as reactionary (and possibly more competent and therefore more dangerous) ready to take his place.

The Basis For The Growth of Right Populism

A recent Pew poll illustrates some pretty shocking realities about the outlook of the typical Republican voter.

The survey asked both Republicans and Democrats to state their views on major institutions, and what they found is that Republican confidence has sharply dropped in the past two years.

The last two years have been full of crisis after crisis, and in each case working people have been dragged around frenetically by politicians, the media, and their bosses. Through consciousness-shaping events, the mainstream “left” has had virtually nothing to offer. They have put up zero fight for the establishment of any genuine social safety net, and have totally failed to stand with working people suffering under a generally declining standard of living. This has meant the right wing has benefitted by leaning into old school divide and conquer rhetoric and whipping up fears about “our way of life” being under threat.

Democratic Establishment Coheres Party Around Itself

While the balance in the Republican Party has been disrupted, the Democratic establishment has come out of the midterms strengthened – thanks to both the right-wing overreach on abortion and also the total failure of the party’s “left” wing to provide any alternative for working class and poor people.

The Democratic leadership delivered the party a “victory” in the midterms by holding onto the Senate and losing the House by only a small margin. In part this looks bigger because the expectations were extremely low. These results have nothing to do with some grand victories they delivered to working people, and everything to do with voters’ fear of Republican attacks.

This is a very fragile foundation for the Democrats, though, because they can’t eternally rely on “look over there” as their only campaigning strategy. Especially when they do things like crush workers’ strikes, and entirely fail to deliver basic protections like codifying Roe, they are handing working people over to the right.

The Democratic establishment defeated not only Republicans in the midterms, but also drove the knife further into the increasingly listless campaign by “progressives” to overtake the party. In the 2022 primaries, progressive candidates were largely defeated by moderate incumbents. In open seat primaries, progressives won by a significantly lower margin than in 2020.

As Socialist Alternative has warned for years, if the Squad didn’t change course, the Democratic establishment would transform them from an opposition caucus into loyal co-conspirators.

This was demonstrated most clearly when all but one Squad member voted to crush the rail strike in late November. There have been retroactive justifications for this betrayal from all corners of the left, from Jacobin articles to statements by leading DSA figures, but no amount of “strategic maneuvering” undoes the very simple fact that progressives in Congress signed their names below a bill preventing rail workers from going on strike.

This vote demonstrates that these elected representatives value the stability of the Democratic Party and the capitalist system they represent over workers’ right to exercise their power by striking. This disqualifies them from the title of “socialist.”

This whole episode has provided a very useful snapshot of the state of the U.S. left.

The big danger in The Squad’s entire approach isn’t just the consequences it concretely has for rail workers, it’s also a preview of the gifts they will likely hand to the right in the coming years based on the logic of their position.

By hiding behind congressional procedure to vote away workers rights, they made themselves functionally indistinguishable from Biden. And who benefits from this? Marco Rubio and Josh Hawley who were able to pose as pro-worker. They provided cover for the Republicans, more of whom cynically voted against crushing the strike than Democrats.

In the coming years we are likely to see an increasingly vicious brand of right-populism come onto the scene, and the progressives in the halls of power are propping this up by failing to provide a left-wing, working-class alternative.

It is not too late to undercut this danger, however. If the unions who currently write blank checks to the Democratic Party instead made a decisive break and called for the formation of a new, working-class political party, it could turn the tide on the growth of the right.

The biggest organization on the U.S. left remains the Democratic Socialists of America (DSA). Their national convention this summer will provide an opportunity for the organization to take a similar stand – officially severing ties with the Democratic Party and committing to run independent, socialist candidates across the country. Socialist Alternative members will continue to make this case within the DSA and in our unions.

The stakes are enormously high, and a certain reckoning is in store for the U.S. left if it fails to provide a lead. The clearest step that can be taken is to immediately begin the project of building a mass, working-class political party fundamentally rooted in mass struggles around working-class issues, from skyrocketing prices to racist police violence. Such a party can be built into the sharpest possible weapon in the fight against the interests of the vicious American ruling class.