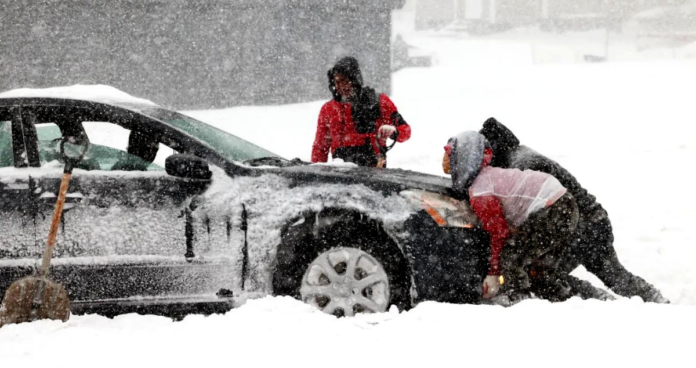 The U.S. has recently experienced winter disasters unlike anything we’ve ever faced. These are not isolated occurrences, but the opening act of a new era of ecological chaos.

Texas saw temperatures drop to 0˚ F in the winter freeze of 2021, causing massive blackouts and over 200 fatalities. The same winter brought two massive atmospheric rivers to the Pacific Northwest, triggering floods and landslides throughout the region. Atmospheric rivers – columns of condensed vapor carrying torrential downpours – contain as much water as 27 Mississippi Rivers.

There’s more to come. In 2023, experts expect La Niña weather conditions to persist: colder and wetter weather in the northern U.S. with drier and warmer weather in the southern U.S. Dry weather is disastrous for the drought-stricken Colorado River, which provides water to 40 million people and 5 million acres of farmland across the U.S. and Mexico. Scientists are telling water managers to plan for a 25% reduction in available water from the Colorado River in 2023.

These extreme winter weather events are undeniably a product of capitalist destruction: fossil fuel emissions have warmed global temperatures and created the conditions for increasingly extreme temperatures and larger, more frequent winter storms. Now tens of millions of working families are enduring the consequences of unfettered capitalism as our neighborhoods flood, our homes freeze, and our water becomes toxic.

We have a double-sided problem ahead of us: we have to prevent the further unraveling of the climate and mitigate the impact of the climate destruction we’re already facing.

Our most immediate task is building climate-resilient infrastructure, like power plants that won’t break down in freezing temperatures, flood control measures, and water retention and reclamation to reverse water shortages. Chief among these measures is transitioning to sustainable energy.

But Biden’s Inflation Reduction Act – the most significant climate legislation in U.S. history, by virtue of the fact that there hasn’t been anything significant before – ignores the need for climate-resilient infrastructure. Instead, it pours out lavish funding for drilling permits and pipeline expansions, subsidies for manufacturing electric vehicles (powered largely by fossil fuels), and lifelines for climate catastrophe profiteers. The Democrats appeasing coal barons like Senator Manchin while nature convulses into chaos isn’t pragmatism; it’s a suicide pact led by people whose money can buy them out of the consequences.

Some capitalists have put forward climate adaptation as a solution. But any attempt at building sustainable, climate-resilient infrastructure under capitalism will be hamstrung by investors’ overriding need for profit. That’s one reason why most companies employ fossil fuels more than renewable energy, despite the fact that solar is now cheaper per watt than natural gas or coal. Investor-owned utility companies receive guaranteed returns for using fossil plants, making it more profitable to continue pumping emissions into the air than transition to green energy. Under the pressure of war in Ukraine squeezing the supply of oil, many European nations are even reopening their shuttered coal plants.

A rational system would consider the survivability of the planet 30 years from now – but capitalism is only capable of acting according to the needs of the next quarterly earnings report.

We witnessed capitalism’s stunning lack of foresight when last year’s COP26 failed to yield any serious commitments to humanity’s survival. COP27 fared even worse – the most well-represented group at the conference was the oil and gas industry. Hundreds of fossil fuel lobbyists attending a UN climate change conference tells us everything about capitalism’s inability to meet the moment.

While a few parasites may momentarily profit from climate disaster, capitalism has birthed a monster it ultimately cannot control. Capitalism’s endless grasping for profit, no matter how extractive or destructive, has upended the planet’s ecological balance. Karl Marx called this monster the “metabolic rift” between nature and capitalism. Not long after Marx wrote that, a scientist identified the relationship between industrial emissions and global warming in a scientific paper published in 1896. Companies like Chevron have known for decades how emissions would make life unbearable for future generations – how can we trust them to employ foresight now?

Like a parasite on the planet, the capitalist system has a single impulse: feeding without limit. And like a parasite, capitalism will feed until the host is dead – or until it is ripped away.

Regardless of capitalism’s inability to solve the climate crisis, the solutions society needs already exist.

Large-scale climate mitigation and green energy projects could employ millions of workers while rapidly creating sustainable and durable infrastructure. Oil and gas workers could be retrained to work in sustainable energy production with no loss in pay. Cities could expand urban public transit and high-density housing, vastly improving traffic, emissions, and quality of life for working class people.

All of this would require capital, of course – capital currently being hoarded by companies who’ve spent billions on stock buybacks, gutted unions, and allowed vital infrastructure to rot. A Green New Deal program large enough to meet the climate crisis would need to – at minimum – tax the rich and corporations, putting the money into public projects unhindered by mindless profiteering. A tax on the rich would free up billions for disaster relief funding, sustainable energy, and urban climate improvements like high-quality green housing, walkable communities, and more. But just taxing the rich won’t be enough as long as decision-making remains in the hands of the profiteers. We will need to take polluting industries into democratic public ownership under the management of the workers most familiar with the industries themselves.

A program like that will never find advocates in the likes of Joe Biden, Joe Manchin, or Nancy Pelosi. For a Green New Deal to come into existence, workers would need a party of our own to fight for it – a democratic organization willing to fight back in the workplace, in elections, and on the streets.

Workers are the only people who have the power to fight for our collective survival. We cannot rely on the system that created this crisis, or the politicians who aid and abet it, to pull us out of it.