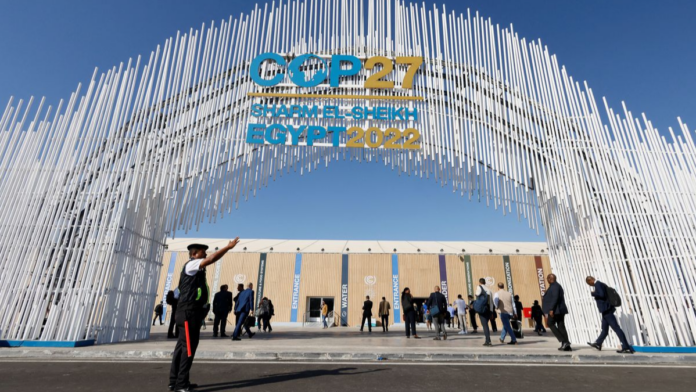 The annual United Nations climate conference, the Conference of Parties (COP), is entering its 27th year with little to show for it.

For over a quarter of a century, the conference has done next to nothing in the fight against climate change. Since COP21, when political elites just barely agreed to goals to keep warming below 1.5 degrees Celsius, exactly 0 of the 40 goals set by the World Resources Institute have gotten “on track” to stop warming before the 1.5° goal.

It’s been so ineffective that climate activist Greta Thunberg has pledged to not attend this year’s summit, putting “greenwashing” politicians and corporations on blast and instead arguing that COP is “not really meant to change the whole system… so as it is, [COP’s] not really working, unless of course we use [it] as an opportunity to mobilize.”

War Puts Climate on the Back Burner

Hundreds of thousands did mobilize for historic demonstrations at COP26 last year, to which International Socialist Alternative sent a 300-strong socialist delegation, but UN diplomats and “climate czars” like John Kerry will never be the ones leading the protests. In fact, he and other political leaders have used the war in Ukraine as an excuse for why they can’t get anything done.

The geopolitical mess following Russia’s invasion into Ukraine, and the involvement of NATO, the U.S., and China has sent governments’ climate goals into a tailspin. With Russia cutting natural gas flows to Europe and gas prices skyrocketing, the E.U. and many neo-colonial countries are resorting to a different dirty energy source this winter: coal.

After decades of wasted time, no region is fully ready to flip the switch from natural gas to renewables. U.S., Russian, and Chinese imperialism is affecting working people around the world on multiple fronts with war, inflation, oil companies making record profits, the subsequent energy crisis, and their staunch unwillingness to transition to green energy.

Amid these crises, extreme weather events will continue: parts of Pakistan are still submerged after devastating floods during a historic monsoon season. The world’s poor and working class are paying the cost for ruling class inaction.

Our Planet, Not Their Profits

A conference of the world’s political and economic elite will not face up to the reality: we need system change. We live in a capitalist system that runs on waste and destruction, and can never be expected to spare an inch of the Earth so long as there’s a dollar of profit to be made. To tackle climate change would mean tackling capitalism.

The billionaire class and its politicians won’t do that. So instead, they burn daylight for two weeks. Leaders congratulate themselves for creating benchmarks – not even meeting them – and the proposals coming out of the meetings are watered down and greenwashed. The goal of the last 26 COPs has been to kick the can down the road until it’s someone else’s problem. COP27 is no different.

COP27 is taking place in Sharm el-Sheikh, a resort city cradled by the Sinai desert and Egypt’s Red Sea coast. The event has a designated “protest area” – in the middle of the desert, far away from the conference center and all the action.

Sharm el-Sheikh has a population of just 12,000 people. Why isn’t Cairo, the country’s capital, the host? Why not Giza or Alexandria? Because there’s a greater chance for “civil disruptions” in those locations – everyday Egyptians and climate activists could intervene in a square or in the streets.

Last November, ISA members were among 100,000 protesters in the streets of Glasgow and Edinburgh. We chanted “climate struggle is class struggle” and “our planet, not their profits,” marching as a socialist contingent. But this November, COP’s happening in a “climate criminal sanctuary” made up of luxury resort hotels and government officials’ estates, connected by big, wide highways. Hiding from their complete lack of action, global leaders are curtailing protest as cover.

Security around Sharm el-Sheikh has ramped up too, and COP27 is expected to be the most heavily-surveilled COP in history. This, coupled with the country’s decade-long ban on public protest, will make any mobilization efforts extremely difficult.

The Bar Is On The Floor

The conference kicked off on November 6, but the media was already downplaying its expectations. 2021’s results were so pathetic, COP26’s president cried about their failure to deliver in his closing remarks. While COP26 was described as “the most exclusive COP yet,” COP27 is poised to break that record. One participant said it was billed to them “as a lovely vacation at all-inclusive resorts – you’d think we were going on a dream holiday.” At the same time, delegates from poorer countries can’t afford that “five-star getaway” nor the visas that’ll send them to their seat at the table.

The theme this year, President El-Sisi says, is “mitigation, adaptation, and climate finance.” While serious measures need to be taken to protect people from the disasters brought on by warming (which is already 1.0 to 1.3°C above pre-industrial levels), this is clearly a way of avoiding the kind of drastic action that’s necessary to reduce emissions. The UN, and pretty much all the world’s major leaders seem content to take a “one step forward, two steps back” approach until it has us all walking underwater.

While Egypt has committed to converting all gasoline-run buses in its major cities to electric (with some powered by natural gas) – which is an improvement – in 2015, Egypt received $12 billion from BP, one of the biggest polluters on the planet, to build a new capital city. In return, BP was able to launch new natural gas projects in the country. And a major sponsor of COP27? Coca Cola, one of the largest plastic producers in the world. Hedging our bets on capitalist world leaders to address the climate crisis means handing the steering wheel to the polluters and megacorporations.

COP27 is already saying it louder than any previous conference – capitalism has no solution to climate change. The task of building a movement capable of taking the world out of the hands of fossil fuel companies and the rich falls to us, the working class and young people.