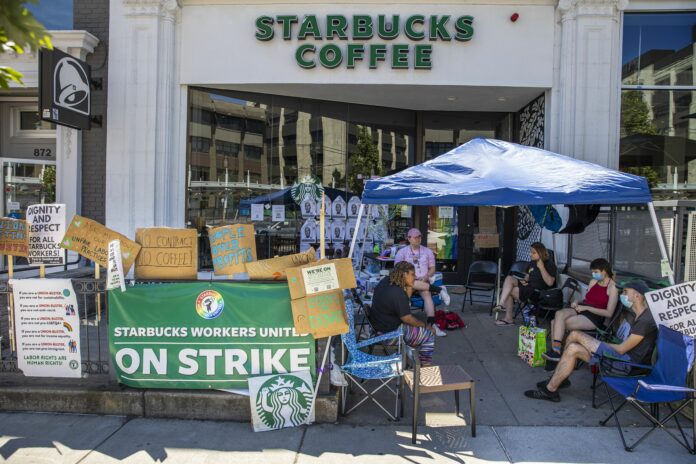 The SBWU union drive is at a crossroads. Less stores are filing for unions. From February to May, SBWU averaged 56 new filings per month. Over the last four months, SBWU monthly average for union filings has trickled to 10. This is mainly because of Starbucks using the ‘carrot and stick’ union busting method: illegally firing union activists while incentivizing workers with increased benefits at stores that stay non-union.

Having cut down growth to SBWU, Starbucks plans to wage a war of attrition against the remaining 256 unionized stores by dragging negotiations out for months, if not years. The company plans to weaken workers’ resolve and use the high turnover rate at stores to water down whatever gains could end up in a store’s contract, if any stores get one at all. Starbucks hopes to make our fight for a living wage, actually affordable healthcare, and guaranteed hours nothing but a distant memory.

In a new ploy, Starbucks accepted numerous stores across the country to the bargaining table last month, which caused our union to gear resources heavily toward getting workers prepared to bargain. However, the company’s lawyers walked out of the room just minutes after arriving, giving nonsense excuses as to why they wouldn’t negotiate. Starbucks executives, and the entire capitalist class, are solely motivated by maintaining their high profit margins, and if these profits are not threatened, they will continue to stall as coffee workers struggle to survive.

It’s a major step forward for the movement that there is a national strike this month for the first time on ‘Red Cup Day,’ November 17, when Starbucks kicks off its holiday sales season. Going forward, to build on this, we need an escalation plan that includes another round of coordinated, national strikes of over 200 stores next month in December that goes for three full days.

In order to return energy to a movement battered by retaliation, we need to bring strike strategy to the next level, with coordinated national action and a serious mobilization of union and non-union stores, and the wider working class who supports us. Striking is the most powerful tool that workers have because it shuts down production and cuts off profits from the source. Baristas across the country have already demonstrated a willingness and capacity to strike, and in large numbers. Over 100 individual SBWU strikes, of varying lengths, have taken place across the country, likely costing the company $1,500,000 or more.

Every effort we put into the union drive at this point in time, including striking, needs to be done through the lens of getting more non-union stores to join our movement. That means we need to make coordinated strike action, regionally and especially nationally, a top priority of the movement moving forward. While positive, it has proven to not be enough to have individual stores striking over unfair labor practices at different times across the country. We need nationally coordinated action during key profit-heavy holidays and special Starbucks promotions to re-energize our movement, starting with another three-day strike next month.

But to be truly effective, collective actions must raise strong, clear demands that demonstrate to the majority of Starbucks workers that it’s in their material interest to join and build this fight. Unfortunately, the leadership of SBWU has argued that only “non-economic” demands should be discussed at this stage of the campaign, but economic demands are the most persuasive and popular demands for workers across the country.

In the New England SBWU, the top three demands made by baristas when surveyed were Cost of Living Adjustments (90%), Living Wage (85%, with $24/hr being the most popular wage), and Short-Staff Compensation (84%), all of which are strong economic demands in a time of massive inflation and a looming recession. By failing to raise a specific economic program for the first 11 months of its existence, our Starbucks Workers United leadership hurt our union’s growth and attractiveness to workers across the country. This must immediately change.

It’s particularly important to call for a specific wage like $24 an hour rather than the vague “living wage” which gives Starbucks room to dispute the dollar amount. Eventually, stores will have to take coordinated economic strike action to force Starbucks’ hand, but even “protected” Unfair Labor Practice strikes around specific issues can bring attention to wider economic demands we’re fighting for.

Starbucks has given every union barista reason to fear being fired, and therefore the best way to move this struggle forward is through unity in action and clarity in messaging. Could 50 stores taking coordinated strike action put forward the same economic demands, “No Barista Under $24/hr,” “Cost of Living Adjustments,” and “Credit Card Tipping” on signs, on social media and in interviews with the press? If enough stores raise such a popular program, this could be one of the most visible and inspiring actions in recent labor movement history.

Our union leadership should also take the initiative to connect all workers at regular strategy assemblies and meetings that can democratically plan and organize all aspects of the strike. This can build cohesion within SBWU and forge a path forward with rank-and-file workers taking the lead in discussions on how to escalate the struggle.

In the Boston region’s five-store strike on August 1, Zoom calls were set up with workers after picketing ended. The conversations were motivating and helped workers decide to extend the strike for a week, with stores agreeing to end the strike together. Another type of escalation besides extending strikes that could be discussed in meetings is hosting joint rallies for economic demands the weekend after a strike. Workers could use the strikes to mobilize the community for these types of events and draw crowds across the country rallying for our cause in the case of a national strike. Escalation should begin even before a strike too, and days where all workers wear union t-shirts or buttons or engage in shorter walkouts can build solidarity and get workers used to taking part in collective action together.

Without growing our union, Starbucks has little reason to give in to our demands, even in the case of very militant action. In Boston, the 874 Commonwealth Ave store went on strike for 64 days, with the main demand of getting their discriminatory manager fired from the company or at least from their store. This was an easy demand for Starbucks to concede on, and yet workers returned to work after this lengthy strike with the same union-busting manager and nothing else gained. While the media and SBWU itself portrayed the strike as a victory. In reality, it was far from it.

A small indefinite strike is not a winning strategy at this point in the movement because they are more financially costly to the union and to the workers than they are to Starbucks, relatively speaking, and a “one day longer, one day stronger” approach without continuing to expand the strike can send a demoralizing message. Workers at a unionized local coffee shop in Boston reported feeling more hesitant to strike for a short period of time after seeing the months-long Commonwealth Ave strike result in little gains.

Similarly, a reliance on ‘ULP’ strikes, such as the one on Red Cup Day, as a legal loophole ends up boxing workers into a time-limited action that is also highly constrained in terms of what it can do and say. What is more effective are short, strong, well-organized strikes that send clear messages to non-union workers about our movement’s economic demands, with militancy shown in workers coordinating action across multiple stores, and having engaged and lively picket lines that are consistently visible.

While we have faith in our fellow workers and the power they hold, we have absolutely no faith the bosses will come around with enough appeals to their morality or “good sense.” The sooner every barista knows that their interests are directly in conflict with a greedy corporation like Starbucks, the better. And as history shows, this change can be won, but only through coordinated and militant strategies that force the bosses to concede.

There can be no real partnership between baristas struggling to survive and people like Howard Schultz, who made billions off our labor. They, and all other big businesses, see a union as antithetical to their main purpose: accumulating profit at the maximum expense of workers. In addition to developing effective, powerful strikes, we need to stop pretending that Starbucks may one day come to its senses and join us at the bargaining table without strong, escalating action.

We should be telling union and non-union workers that they will only concede to our demands when we put enough economic pressure on them. If we aren’t honest about this fact, we risk misleading workers as to what kind of fight we are in, and losing the confidence of the Starbucks workers who understand that Starbucks won’t “turn good” anytime soon. Clarifying this is especially important now that Starbucks is pretending to be open to negotiating.

As the holiday begins at Starbucks, workers are being presented with a golden opportunity to not only hit the bosses where it hurts them most, but revitalize our movement and show that when we fight we do win. If our union seizes on this opportunity by putting forward strong economic demands and by taking action at large scale we can show all Starbucks workers there is a better option – a real fighting chance we have to improve our working conditions and our lives. And only through this strategy will we grow our ranks and force the bosses to concede to our demands.