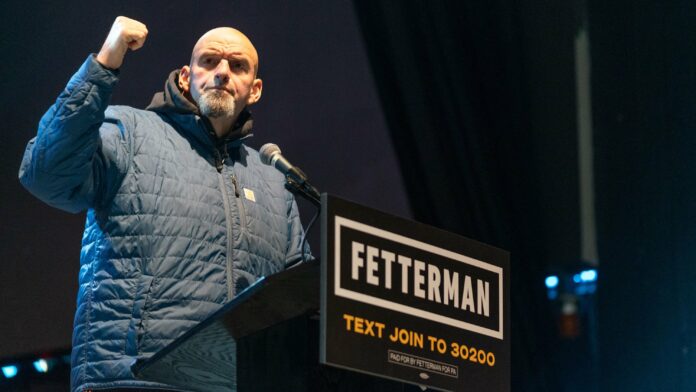 The midterm elections are days away, and across the country Democrats are campaigning on “defending democracy” against the Trump Republicans. After Roe vs. Wade was overturned, Democrats doubled down on this strategy while many Republicans dialed down their full-throated anti-choice position. And yet, the GOP has partially recovered in the absence of any Democratic plan to combat inflation, as the majority of voters identify the economy as their top concern. The outcome of the midterms still hangs in the balance in several swing states, and Pennsylvania is among the most watched and polled, with a very tight Senate race which could determine who controls the Senate, and a gubernatorial race featuring one of the most heinous right-wing candidates in the country.

The Pennsylvania Senate race was looking like a slam dunk for Democratic candidate John Fetterman against the Trump-backed Republican celebrity doctor Mehmet Oz, but in the last two months, it’s tightened up dramatically. While the Fetterman campaign spent their time trolling Oz for being rich and from New Jersey, Oz doggedly blasted the airwaves with claims that Fetterman is a soft-on-crime left-wing extremist who wants to let criminals out of prison. Crime is a top concern of many Americans, so this gains a certain echo. In response, Fetterman has distanced himself from the left, and has run ads touting that he “voted with law enforcement experts nearly 90% of the time.” In the one televised Fetterman-Oz debate, Fetterman’s poor performance wasn’t just due to his slow recovery from his recent stroke – he caved to the right on the environment, insisting on his steadfast support for fracking.

Dr. Oz certainly is a phony quack and a right-wing goon, but Fetterman, despite his cultivated working-class veneer and some populist planks in his platform, has never thought to harness the power of working class movements and unions to win things like a $15 minimum wage or Medicare for All. Instead, he has relied on Biden, Harris, and Obama on the campaign trail. A “lone wolf” populist candidate who doesn’t base themself on a working class movement will end up having very little spine to stand up to attacks from the right, and is easily co-opted and used as a tool by the Democratic Party establishment.

Far right gubernatorial candidate Doug Mastriano rejects the results of the 2020 election and funded buses to the January 6 insurrection (he enthusiastically attended too). He’s an anti-vaxxer and conspiracy theorist, opposes all abortion with no exceptions, rails against trans people in sports, and would slash school funding by 33%. Mastriano is so far right that members of the GOP have instead endorsed his Democratic opponent. His staunch support for “right-to-work” has even driven police unions to do the same! He further hurt his polling numbers by cutting himself off from the mainstream media, refusing to debate Shapiro on a non-right wing network, and spending very little on ads until quite late in the campaign.

Still, many people see the possibility of a Mastriano victory as a doomsday scenario, and definitely not without reason. His opponent, the establishment Democrat Josh Shapiro, is acutely aware of this, and has built a campaign strategy resting entirely on being the guy who’s not Mastriano.

The Democratic Party is Building the Right

Josh Shapiro actually began his campaign against Mastriano back in the primary, which he won unopposed. They decided early on that Mastriano was the Republican they wanted to face off, and proceeded to spend over $1 million elevating Mastriano’s campaign. Democrats used this rotten strategy all across the country, funding reactionary right candidates they deemed easier to beat – so easy, they thought, that they wouldn’t even need to seriously campaign around issues that matter most to working people. It would be enough to simply not be an existential threat to women, LGBTQ people, and people of color. All of this serves as a convenient smokescreen that obscures his rightward break with Democratic Governor Wolf on COVID, climate change, school vouchers, and more. Shapiro’s campaign is a true embodiment of this rotten flavor of lesser evilism exploited nationally by the Democrats: either way, working people lose.

Shapiro is likely to win the election, but in the process, he and the Democratic Party as a whole are playing an active role in building the far-right movement. Despite Mastriano’s flagging poll performance and small rally sizes, he is cohering a far-right core around him – one that is consolidated more firmly around far-right politics than the broader mass that voted for Trump.

After Trump’s loss in 2020, Socialist Alternative argued that Trumpism was far from defeated: the deteriorating economic conditions and general distrust of the political establishment remained. Just as we’ve seen the far right continue to grow and advance their anti-choice and anti-trans agenda under Biden, Mastriano’s movement will remain a dangerous and growing force under a Shapiro governorship, especially as a looming recession threatens to hit working people harder after a year of rising inflation.

There have been real opportunities to build a left-wing working class movement, for example most recently the movement that developed this summer to defend abortion rights. But every such movement has been defanged by the Democratic Party and redirected towards the elections. The Democratic Party is focused solely on winning elections, with no strategy for safeguarding democratic rights, ending inflation, or fighting the growth of the far right.

How to Fight the Right

Mass working-class movements are the only force that can actually change society, but they’re completely antithetical to the methods of the Democratic Party. To the extent that mass social and labor movements develop independent working class leadership, they pose a threat to the Democrats, who can’t afford to let movements aim their fire at their corporate paymasters. Instead, they actively strive to seize the reins of movements, steer them 180 degrees away from the field of battle, and render them completely dependent on the party. This is exactly what happened to the abortion rights movement, and Black Lives Matter before it.

Each election, unions pour millions of dollars into Democratic Party campaigns and expend resources doorknocking their members to get out the vote. This locks them into leaning hard on Democratic Party politicians to help them lobby for meager legislative changes, instead of relying on the power of their own members in the workplace. As a result of this strategy, the unions find themselves short – on both cash and on political will – to wage uncompromising class battles with well-prepared walkouts and strikes, launch serious fights to unionize new workforces, and fund independent labor candidates that take on the bosses and their political representatives. As unorganized workers moved bravely into struggle during the pandemic and a bold rank-and-file sought stronger contracts throughout Striketober, they were betrayed by established union leaderships who put their partnership with Democrats before organizing the unorganized.

In order to fully unleash their potential, social movements and the labor movement need to break free from the Democratic Party. Instead, we need a new left-wing party for working people – free of corporate cash and with room for robust democratic participation – for these movements to call a political home, and use as a tool to organize against corporate billionaires and the far right alike.

Breaking Lesser Evilism at the Ballot Box and Beyond

The Democratic Party is fueling and building the right more actively than ever before. It’s understandable that many workers and youth will approach this election completely dissatisfied with this option, and will opt either to sit the election out or vote for the Democrats as an act of “harm reduction.” However, to participate in the circular process of voting blue to block Republicans will only further push the goalposts backward when it comes to implementing meaningful reforms for working people. In the process, progressive and left Democrats have made significant concessions to the party’s establishment, and have actually enabled the growth of the right. This destructive method of the Democrats should be protested in as organized a way as possible.

At the ballot box, this means casting a protest vote against the Democrats and the Republicans, for the strongest independent left candidates. In these two races, this means voting for the Green Party. The Green Party nominally stands for a left-wing independent alternative to the two-party system. However, we disagree with the party’s more eclectic, inconsistent, and almost exclusively electoral approach. Most important are efforts to organize the working class and social movements against the ruling capitalist class across all arenas of struggle, not just into the voting booths, but into the streets, schools, and critically in workplaces. We do not think the Green Party will develop into that political alternative, but a protest vote is the first step towards a commitment to build a new mass left-wing party of, by, and for working and young people. It also represents a refusal to cede ground to Democrats and Republicans.

Workers need a political party with real democratic structures, whose candidates are accountable to a common working class program that they can debate, discuss, and refine as members. It should be a party of struggle, one that supports and sustains the class battles of union and nonunion workers, and provides an organizational nucleus for struggles of all the oppressed. Such a party would be a real force for combating the right, by relentlessly fighting for real working class demands and recruiting all working people to join in – rather than shifting blame for capitalism’s crises onto oppressed groups of people like the Republicans do, or listlessly pretending their hands are tied like the Democrats. Beyond a protest vote this November, Socialist Alternative is committed to fighting alongside those desperate for a serious shift in society that puts ordinary people before profits, and power into the hands of those who run society.