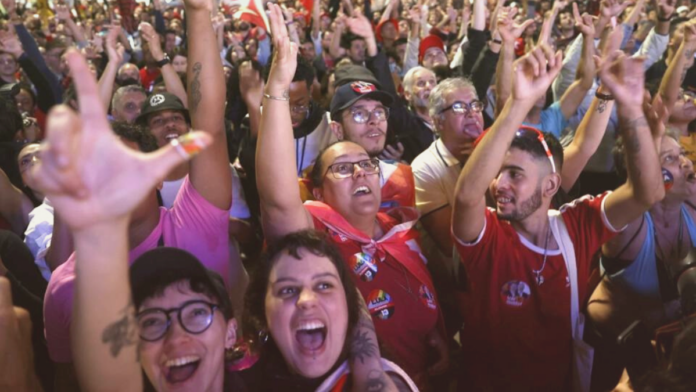 Bolsonaro was defeated in the Brazilian presidential elections. This represents a victory for the workers and all poor and oppressed people.

The victory of Lula, the candidate of the Workers Party (PT) and the “Brazil of Hope” Coalition, was by a small margin in a dramatic dispute until the last moment. The difference was less than 2% of the total valid votes.

Bolsonaro was defeated despite all the maneuvers and crimes he committed in one of the dirtiest campaigns in the history of Brazil. He used the state machine in his own service in countless ways. The example of the Federal Highway Police being directed to prevent the movement of voters on election day in regions where Lula had an advantage is just one example. Political violence and intimidation were weapons used by Bolsonarism systematically in this campaign. Not to mention the avalanche of fake news, slander and manipulation promoted by the extreme right.

The working class and the poor, suffering and oppressed people of this country have the right to celebrate. Bolsonaro represented a tragedy for millions of Brazilians. His management of the pandemic and of the economy were criminal, generating deaths, hunger and despair. His policy toward the Amazon and the indigenous peoples and (rural communities of former slaves) quilombolas was also criminal. His government represented a permanent and systematic attack on women, black people, and the LGBT+ population. Democratic freedoms were under threat and attack during his government.

Even knowing the capacity of the workers and the people to fight, we know that his reelection would have created more difficult conditions for the fight to transform Brazil in the direction we want, of social equality, of the end of racism, sexism, and all kinds of discrimination, of the defense of the environment, of workers’ democracy, of socialism.

For all this, his defeat should be greeted with fervor. But we must keep in mind that Bolsonaro’s electoral defeat does not end our problems. Bolsonarism as a reactionary political and social phenomenon and as a threat will continue to exist in Brazilian society. It has shown that it has social roots and a political and electoral strength that does not crumble from one hour to the next. Besides, having won victories in states like São Paulo, Rio and Minas Gerais, he will have an important base in the National Congress.

Once the elections are over, Brazil will sink even deeper into economic crisis and a real social bomb is about to explode. The extreme right will try to take advantage of this situation. The experience of other countries and the history of Brazil itself shows how these reactionary forces can take advantage of situations in which forces considered “progressive”, once in power, fail to meet popular demands and frustrate the majority of the population.

To avoid this it is fundamental that we learn from the experience of fighting Bolsonarism, from the mistakes and successes, and draw conclusions about the tasks of the next period.

Lula did not win the elections because he allied with the so-called “democratic” right wing and formed an extremely broad front, sacrificing a program of profound transformations. The first round of voting made it clear that the alliance with the right, the vice-presidency of right winger Alckmin, for example, did not bring more votes, not even in São Paulo where Alckmin was state governor. Besides, it is already clear that this right-wing, present in a future Lula government, will represent an obstacle in relation to policies of social and political change.

Lula’s victory happened because it reflected the rejection of the majority of the Brazilian people of what Bolsonarism represents. To be consistent with this sentiment, Lula should carry to the ultimate consequences a program of radical transformation of Brazilian society. This is the only way to attract the social base of workers that has been deluded by Bolsonaro and to prevent Bolsonarism from returning with more force in the future.

Lula won the election despite having refused a strategy of mobilization and struggle by the working class, preferring to lean on the institutions of the current political system. We saw on election day how the timidity and restraint of the TSE (Supreme Electoral Tribunal) in cracking down on Bolsonaro’s electoral crimes almost put everything at risk. We can only rely on the organized strength of the working class and the mobilized people.

From now on, the central task of the workers and the people, the social movements and the left, is to prevent any coup maneuver by Bolsonaro until the day of Lula’s inauguration. The best way to do this is to mobilize workers to demand the immediate punishment of Bolsonaro for the crimes he has already committed. Bolsonaro can not go unpunished, this will only serve to further attacks in the future.

In addition, it is essential that the unions, social movements and the left prepare themselves to win conquests and rights in the struggle. They will not be handed down from the future government. They will have to be won through struggle.

Lula’s government must begin on January 1 under pressure from organized and mobilized mass movements. Such a struggle will only assist the fight against Bolsonaro’s far right opposition. It can both keep Bolsonaro against the wall and fight the influence of the neoliberal right within Lula’s government.

For all these reasons, struggle is now even more necessary! We need to defeat Bolsonarism in the streets, win new victories and rights and fight for a socialist alternative in Brazil.