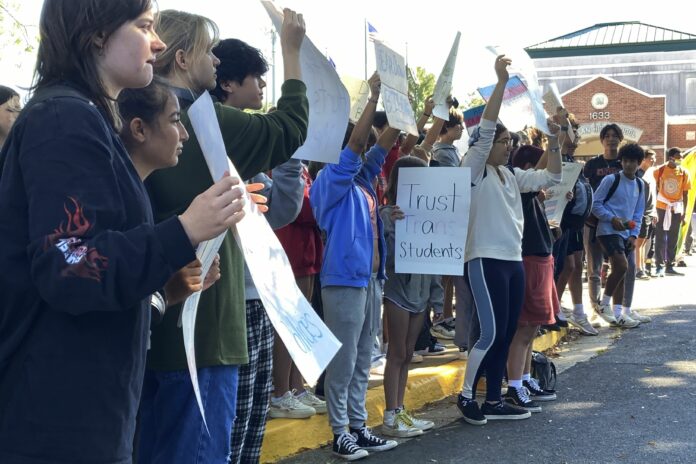 Across Virginia, thousands of public school students walked out of class last month in protest of Governor Glenn Youngkin’s regressive new school guidelines for transgender students. The new policy rolls back protections previously guaranteed to LGBTQ+ students in the state of Virginia, and makes it nearly impossible for trans and queer youth to feel safe and welcome at school. While Democrat-led school districts threw up their hands, students met the right wing attacks with chants of “D.O.E – leave us be!”,  “No Glenn!” and demands of protection and respect of LGBTQ+ students.

Under the guise of “privacy, dignity, and respect,” the new policy by the Virginia Department of Education will require students to use campus facilities (like locker rooms and restrooms) that correspond to their sex assigned at birth, despite their gender identity. Should trans and queer kids want to participate in sports, they will be forced to do so based on their sex assigned at birth. Worse yet, school districts will no longer be able to encourage teachers to protect students by keeping information about their identity private from parents, putting countless kids at risk of hateful retaliation from abusive households.

Further, it prohibits teachers from using the preferred name and pronouns of their students without explicit, written parental consent and an update to their school record. In order to make such an update, trans and queer kids will be required to provide legal documentation with their preferred name and gender. Before a student can be addressed by their correct name and pronouns in Youngkin’s model school, they must be lucky enough to have supportive parents who also have the cash on hand to endure the time-consuming and expensive task of getting changes made to legal documents.

By ensuring only a select, privileged few have access to the right’s sham of “privacy, dignity, and respect,” Youngkin and the GOP can protect their discriminatory policy against legal challenges while leaving working-class queer youth to suffer.

Tired of being told to sit down and wait for adults to protect them, students last month took charge and showed the Youngkin administration that it wouldn’t be able to implement the new policy without a fight. In rebuke of the edict, students proudly and courageously walked out of their classrooms to demand that the Department of Education rescind its plan to implement the statewide policy. Students and members of the Pride Liberation Project, a queer student activist organization, mobilized thousands of students to walk out of class to protests and rallies outside their schools. Even in schools where administrations refused students the ability to walkout, “blackouts” were organized to show opposition without retribution.

It is critical that the walkout be the beginning of escalating actions that directly counter Youngkin’s administration with strong demands and a clear political program. Building directly off of the walkout, students are organizing and mobilizing their classmates to attend upcoming school board meetings en masse and submit public comments on the policy, which has already garnered over 50,000 responses. It is clear that young people in Virginia do not want this policy in place. The next step for the movement should be appealing that teachers show their active solidarity with students by supporting their ongoing walkouts, and even organizing coordinated school-wide walkouts.

Queer students are not the first to suffer at the hands of the reactionary right, nor will they be the last. As political polarization deepens, the right is leaning into “culture war” issues as a means to whip up their base, knowing they have nothing concrete to improve the lives of working people. As a result, LGBTQ+ students and teachers have been subjected to needless scrutiny, criticism, and threats as “Don’t Say Gay” and forceable detransition bills have been introduced in state legislatures nationwide. All the while, they have run up against absolutely no concrete pushback from the party in power, the Democrats.

Despite their claim to be the champions of queer rights, the Democratic Party and its leaders have done absolutely nothing to curb the onslaught of anti-trans legislation across the country – even the “progressive” Squad have done little more than tweet at the GOP in indignation. In a mirror image of their response to the Dobbs decision leak, Democrats are simply telling voters to sit down and vote.

In stark contrast to the incredible organizing done by students in Virginia, there has been no attempt from Democrats to organize a mass movement of students, teachers, and workers to force the GOP to stop the implementation of the new policy. Instead of openly refusing to comply with the regressive standards, school boards in Virginia dominated by Democrats have thrown up their hands in resignation, saying they must wait until the policy is implemented to respond. This is a complete betrayal of queer youth, and a compelling example that movements to defeat the far right must be organized outside the Democratic Party and their NGO apparatus.

Despite the failure of those in charge to put up any real fight back, students and teachers can still organize a successful fight against right-wing reaction. By coming together to plan escalating actions and build the mass movement in the streets, students and teachers can use their power and stop the successful implementation of this policy. We cannot accept the failed wait-and-see strategy that Democrats employed following the draft leak of the Dobbs decision, we have to keep fighting! The abortion sanctuary city victories in Seattle and Dane County, WI (in a trigger ban state) show that despite the ferocious pushback we receive, fighting movements can win real victories.

Students must continue to organize walkouts, sit-ins, and rallies over the next few weeks as the public comment period comes to a close, as well as work with their teachers and communities to put coordinated pressure on school boards and the state. For the strongest possible movement, teachers should turn out as students’ biggest allies, and lead the labor movement to fight for fully funded, LGBTQ+ inclusive public schools! Even in vicious “right to work” states like Virginia, teachers’ unions and students have the opportunity to disrupt the status quo, with wildcat strikes if necessary, and strong class struggle tactics and build a progressive mass movement to protect queer youth and force a retreat of the right.