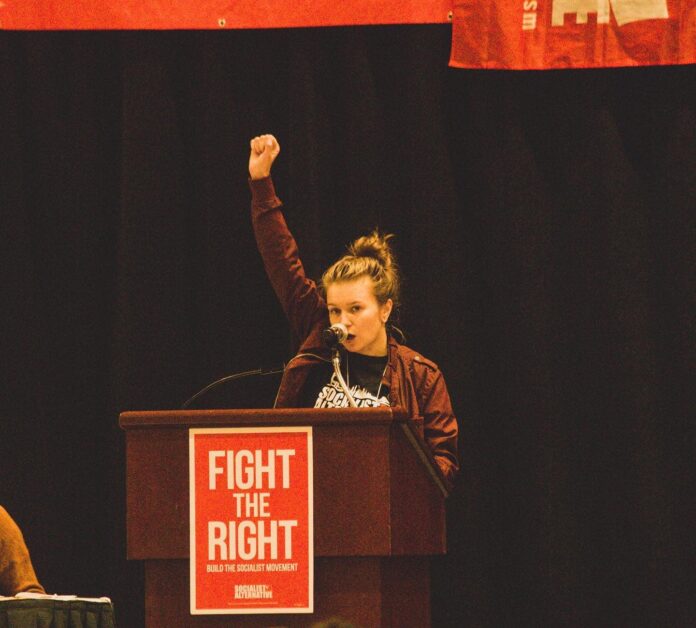 The effect that more than three hundred dedicated socialists in one room can have on morale can not be overstated.

The fight for a socialist world can feel demoralizing, frustrating, and often isolating. There’s no point in denying that progress in this struggle more closely resembles the outline of a mountain range rather than a straight line. But attending Socialist Alternative’s 2022 summer school just outside of St. Louis, Missouri this Labor Day weekend was a remarkably energizing experience for myself and hundreds of other Socialist Alternative members who came from across the country and, in some cases, from around the world.

This summer was the first time since the beginning of COVID that members of the entire national organization were able to meet in person. The weekend-long event was centered around discussing Marxist theory, the history of the workers’ movement, and the tasks for today. That so many people were willing to fly in or spend an entire day on the road for an event like this is a testament to the seriousness and energy of our organization. Indeed, a vast swath of attendees had been members of the organization for less than six months. For some, this was the first major national event they had ever attended as a member of the organization.

The event opened with a series of discussions on our global perspectives, with a number of members of our international, the International Socialist Alternative (ISA), having flown in to discuss and elaborate on the struggles taking place in their home countries. As an organization with members in all corners of the globe, it is vital that we remain informed and actively engaged with world events, and having access to socialist organizers with first-hand experience in the constantly developing fights cropping up globally is crucial to keeping us true to our internationalist roots. Pairing these international perspectives with the following day’s discussions on U.S. perspectives did a lot to strengthen and clarify the links between the work we do here and the work we do on a global scale.

Each day was dense with opportunities for political development and consolidation. Sessions were held on everything from the Amazon union fight to the student movement to the Sri Lankan uprising. We even discussed theoretical topics like dialectical materialism and the fundamentals of Marxist economics.

Equally important to the more formal educational seminars was the mingling and bonding that took place both inside and outside them. From the moment I stepped off of the plane in St. Louis, I was learning names and getting to know people with a genuine interest in fighting for the international working class. It’s one thing to have an abstract sense of your organization at large in your mind; it’s another thing entirely to see it with your own eyes. It’s intimidating at first, undoubtedly, but everyone was there for the same reason: to sharpen their politics, and to connect the struggle in their hometown to the struggle in yours.

Despite having spent the weekend digging deep into a vast array of very serious topics, I left St. Louis with a heightened sense of optimism for the continuation of our fight for socialism. The mood throughout the whole weekend was unmistakably positive, with excited conversations about the state of the movement and in-depth discussions of history, theory, and action echoing down the halls of the convention center. Each session ended with the takeaway that while the world can look bleak at a glance, there are huge opportunities on the horizon – our task is to assess the situation and take action. That’s precisely why everyone in that room was there: rather than sinking into apathy at the current state of the world, we took to our feet for the world we know we can win.