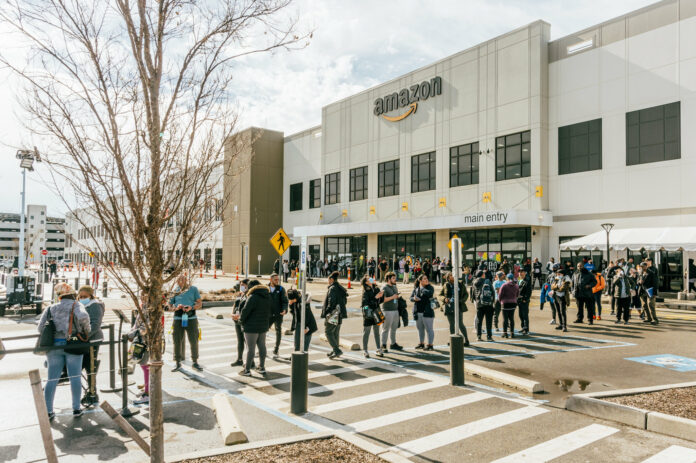 Of all the workers organized by all the unions in the last twelve months, 22% of them work at Amazon’s JFK8 fulfillment center on Staten Island. Along with 135 successful union elections at Starbucks stores in the last six months, the victory at JFK8 is a strategic breakthrough for the labor movement in terms of organizing the unorganized, especially in sectors of the economy that have been long abandoned by conservative labor leaders. However, to keep up the momentum, it’s essential to escalate and expand the struggle as quickly as possible, and learn the key political lessons of the JFK8 victory.

While Amazon Labor Union’s success in winning the first union at an Amazon facility in the country was historic, the battle is far from over. In many ways the hard work starts now as Amazon will do everything in their power to deny the newly unionized workers a decent contract.  Already, Amazon has won a victory by having their appeal of the election results reviewed by a more business-friendly office of the National Labor Relations Board (NLRB). While the NLRB is more favorable under Biden than it was under Trump, as a whole, the institution is not a friend of working people.

Amazon relies on a 150% average annual turnover rate at its facilities to help it bust unions, which is why the ALU needs to escalate the struggle for a contract as quickly as possible. Amazon is already retaliating against workers affiliated with ALU, and if this continues unchallenged, it will have a chilling effect on workers at JFK8. It’s likely that getting Amazon to the bargaining table will require strike action. ALU will need to begin preparation for this very soon. The wider labor movement, especially the 1.2 million member strong Teamsters, can’t sit on the sidelines and should urgently jump to the defense of the workers at JFK8. A first step in this would be organizing national days of action demanding the union be certified, that Amazon negotiate, and an end to retaliation against workers.

Even though 30% of all union election victories don’t produce a first contract within three years, it would be a critical mistake to draw the conclusion that winning a union contract at Amazon is impossible as some major unions are doing. Certain forces in the labor movement are casting doubt over the possibility of formally unionizing Amazon. For example, the Teamsters said what’s needed is “non-traditional campaigns” while also emphasizing that Amazon workers need a union.

Other groups with a solid track record of rank-and-file organizing like a wing of Amazonians United have completely ignored the JFK8 victory, and pointed to the very existence of union contracts as a key reason for the political degeneration of most union leaderships today (rather than their adaptation to the bosses). Of course, there can be no “fair deal” between a billionaire like Jeff Bezos and the 1.2 million Amazon workers who toil everyday to make his billions. A “good” union contract is nothing more than an accurate snap-shot of the current state of power relations between workers and their boss, and contract victories are a key step forward for previously unorganized workers that all socialists should fight for.

The Entire Labor Movement Should Put Its Weight Behind Unionizing Amazon

As an independent union, ALU developed as a response to the conservative approach of most labor leaders, who for decades adapted themselves to U.S. capitalism even as the structure of the working class changed beneath their feet. In 1939, for every factory worker there were two service workers – today there are ten. In 1978, 36% of service workers were employed by “large” companies – today it’s 62%. While there were important attempts to take on retail corporations with campaigns like Our Walmart, which cost UFCW $8 million annually, and Fight for $15, which cost SEIU around $70 million, these efforts failed to organize a single worker into a union. This is the context in which the independent Amazon Labor Union formed, which won a historic victory with less than $180,000 in the bank.

Other ad hoc groups inspired by ALU have developed as well. Amazon workers in North Carolina are organizing on their own under a coalition called Carolina Amazonians United 4 Solidarity & Empowerment (CAUSE). Workers at Trader Joe’s in Massachusetts announced their union campaign as an independent group called Trader Joe’s United. However, viewing independent unions as a silver bullet can lead to mistakes. For example, Target workers recently filed for a union election with the Industrial Workers of the World (IWW). Despite its powerful legacy of struggle dating back over a century ago, this can be an unnecessary barrier to Target workers who view agreement with the IWW’s explicitly anti-capitalist program as a precondition for affiliating with the union. Still, the fact that a section of workers are turning to IWW in a huge company that the mainstream unions have made no inroads into shows the thirst for new, more confrontational, methods of organizing.

The emergence of these independent, unapologetically worker-led unions like ALU have removed a key barrier to winning: the ossified and conservative labor bureaucracy. The ALU has a strong starting point to launch a massive nationwide campaign to unionize Amazon with the workers at hundreds of facilities who reached out to them. However, they will not be able to do it alone and need to draw in the other unions who have declared intent to organize at Amazon like the Teamsters, and individual locals of the International Association of Machinists (IAM), United Electric (UE), and groups associated with SEIU.

ALU should use their new authority to influence the approach these established unions take. Under the new leadership of Sean O’Brien, the Teamsters have written what amounts to an open declaration to unionize Amazon, which should have Amazon worried. But what’s critical is that ALU’s successful methods at JFK8 are the methods that underpin the Teamsters campaign. Their statement does not include any mention of ALU’s demands for a $30/hr starting wage, and replaces calling out Bezos’ wealth with the traditional language of the labor leadership like making Amazon a company where “shareholders do well because workers are doing well.” This is a mistake and ALU needs to make sure the fighting approach they used at JFK8 is not drowned out.

All Out For The ALU Organizing Conference

There is a danger that, following ALU’s defeat at the neighboring warehouse at LDJ5, they lose momentum and turn inward at JFK8 rather than spreading their fight to other facilities. While it’s essential to defend the JFK8 election and prepare for the looming contract fight there, Amazon would like nothing more than to be able to isolate ALU’s victory and focus all its union-busting firepower at one facility. To succeed, the movement needs to expand rapidly.

To avoid getting contained by Amazon’s union-busting efforts, the next step for ALU is to make concrete plans for their national organizing conference, providing a home for Amazon workers across the country looking to form a union. At this stage of the struggle, an organizing conference can play an essential political role in the movement, defending the invaluable role of clear demands, naming a boss like Jeff Bezos as the enemy, emphasizing the importance of rank-and-file leadership, and modeling how a healthy union should be built, like for example ALU’s constitutional clause that union officers earn no more than workers they represent.

In ALU’s efforts to avoid replicating the mistakes of the existing labor leadership, it’s entirely understandable that there are hesitations about hiring staff and professionalizing their finances. However, without a strong organization, the key political lessons of ALU’s victory can be isolated as larger unions like the Teamsters enter the fight against Amazon with a more conventional and less militant approach. Finally, expanding ALU’s national organizing power can also lay the basis for wider mass days of action, solidarity strikes, and other organizing that will be essential to force Amazon to the table.

Other unions and the wider working class should be mobilized directly into the struggle. Unionized workers at UPS and the USPS handle a third of Amazon’s deliveries, and if ALU calls a strike, these workers can “refuse to cross the picket lines” in the form of refusing to deliver packages that fuel Bezos’ profit making machine. In addition, wider protests in coordination with striking workers can gum up the few lanes of road that most of Amazon’s goods travel past.
The first step in unionizing Amazon everywhere, and the retail and service sectors in general, is to go all out to make sure Amazon can’t overturn the election results at JFK8, and that they win a strong contract that is an inspiration to all Amazon workers. To achieve this, ALU needs to call an organizing conference to clarify the political approach they used to win a JFK8 while not missing the forest for the trees on questions like which logo appears on the union card at other facilities. Finally, the most important thing is to recognize the immense historic opportunity that JFK8 workers laid at the feet of the working class to boldly rebuild the labor movement at a time when unions are more popular than ever before, inflation is rocketing past wage increases, and tens of millions of people are fundamentally reassessing their work lives.