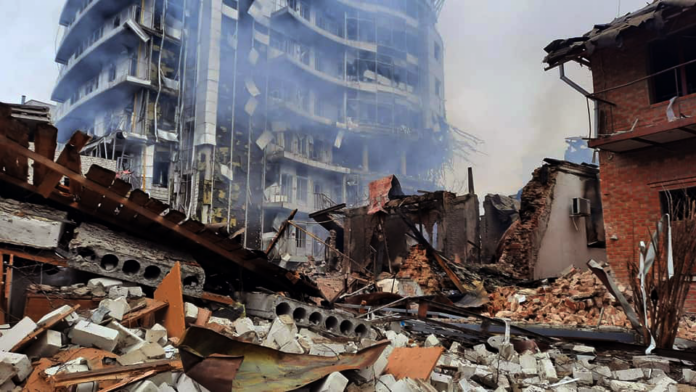 That the Ukrainian army could retake the key city of Izium in just a few days, drive Russian troops out of the entire Kharkiv region, and put pressure on the front in the Donbas was not foreseen by anyone. Several analysts did not expect a Ukrainian offensive, assuming it was about retaking Kherson city and region in the south.

The largest Ukrainian troop deployment has also been in the south, against the 20,000 Russian troops in Kherson, on the western side of the Dnieper River. But it is the parallel, smaller, deployment in the northeast that has produced spectacular results. From 5 September, when the offensive began, and in the following weeks, up to 8,000 square kilometers were recaptured from the Russian occupying force, who fled in near panic, leaving behind weapons, ammunition, vehicles and even still hot food.

The possibility of victory for Ukraine in the war is being discussed in Kiev and in the West. The territory captured is larger than that occupied by Russia in five months. President Zelensky’s advisor, Oleksiy Arestovych, commented that “after the U.S., Russia is the largest supplier of vehicles to the Ukrainian army.”

Mass graves have been discovered in Izium, with over 400 victims, many of whom were tortured. The brutality of the Russian “liberators” is once again evident as they are forced to retreat, as they did earlier from areas north of Kiev. More massacres and mass graves will become known.

Since the Russian invasion began on 24 February, according to the UN, 5,827 civilians have been killed and 8,421 injured, both figures most likely underestimates, especially in occupied areas.

After Izium, the operation has slowed down, although Ukrainian forces have opened up possibilities to continue towards Severodonetsk and Lysychansk, cities that Russia captured in early July, bringing the entire Luhansk region under Russian control. Since then, Russian forces have advanced extremely slowly and have not achieved Putin’s stated goal of taking control of the entire Donbas (Luhansk and Donetsk).

Military analysts in the West believe this is a turning point, but warn against assuming that the war is over. Sweden’s Dagens Nyheter of 20 September quotes the most widely consulted Swedish expert: “In recent days, there have been reports from various quarters around Ukraine of ongoing fighting. But Joakim Paasikivi thinks that, at the moment, it is difficult to form an opinion about the situation in Donbas, for example.” In Donbas, there are also sections of the population that are on Russia’s side, as has already been shown in protests by locals against Zelensky’s visit to Izium on September 14, as reported in The Economist.

So far, Russia has responded with rocket attacks on infrastructure and civilian targets, as well as continued artillery fire and attempted advances in Donetsk, around the town of Bakhmut. Russian defense lines around Kherson and in Luhansk have been reinforced while the Ukrainian army aims to cut Russian maintenance lines.

In Russia, the setbacks in Kharkiv have led to open discussion in the media, with war hawks such as “Communist Party” leader Gennady Zyuganov calling for general mobilization and that the war should be called a war and not a “special operation.” So far, Putin has resisted, probably for several reasons. A general mobilization would be to admit the error of judgment that the war would be short-lived. It would be unpopular and expensive and conscripts would not have sufficient training.

While Ukrainian soldiers are motivated by resistance to the invasion and defense of their homes, Russian troops have been mobilized by money. “Russian President Vladimir Putin is increasingly relying on irregular volunteer and proxy forces rather than on conventional units and formations of the Armed Forces of the Russian Federation,” writes the Institute for Study of War in one of its daily reports and analyses.

The notorious Wagner group, led by Putin’s friend, oligarch Yevgeny Prigozhin, has recently recruited 3,000 prisoners to its forces in Ukraine, according to SvT (Swedish public service). Prigozhin is portrayed by Russian war hawks as the one who can turn the war around. Other growing demands are for the “republics” of Luhansk and Donetsk to be officially annexed to Russia, like Crimea in 2014. Plans for “referendums” in Kherson and other areas have been shelved following the Ukrainian offensive. Officially, Russia has not given up its goal of taking control of all of Ukraine, although since April efforts have been focused on the Donbas and the Black Sea coast. Now, in early autumn, Russia has made new arms purchases from Iran and North Korea.

How was the offensive possible? From day one, morale and motivation have been far stronger on the Ukrainian side. Russian soldiers and even officers have testified about how they were not even informed that they were on their way to a war. At the beginning of the war the Russian military columns were open targets. And now, they are outstripped by the more modern equipment of the Ukrainian side. During the summer and autumn, Ukraine has had more soldiers in combat. Russia has lost about a third — dead or wounded — of the 200,000 soldiers who started the war, while Ukraine has no problem mobilizing and recruiting into an army with hitherto high combat morale that has now been further strengthened.

The fact that the war is also part of the global power struggle between imperialist powers is a crucial explanation for the latest military developments. For U.S. imperialism and its junior partner, the EU, the war is being waged directly to grind down and inflict a defeat on Russian imperialism and as a strong warning to China. The second cold war between U.S. imperialism and Chinese imperialism, with the latter adopting a position of pro-Russian “neutrality,” remains a priority for both sides.

One of Western imperialism’s main organs, The Economist, declares. “The U.S. and other friendly states have sent rockets with sufficient range and accuracy to change the terms of battle. Ukraine can see and reliably hit enemy ammunition dumps, command centers and logistical hubs far behind the front lines, which Russia cannot. Russia’s supposed air superiority has been suppressed by mobile air defenses. And while Russia is reducing its weapons stockpile, Ukraine’s is becoming both more plentiful and more powerful, as superior NATO equipment replaces the old Warsaw Pact equipment.”

Dagens Nyheter summarizes: “Late on Thursday, it was also announced that the U.S. is investing an additional $600 million in military aid to Ukraine. Among other things, the Ukrainian forces in the east will receive more ammunition. It is the 21st arms package from Washington to Kiev since the war broke out in February. According to the U.S. State Department, the U.S. has now spent $15.8 billion in military aid to Ukraine. And the White House has upped the stakes considerably since the beginning of August.” The DN article compares this with the largest “normal” U.S. military aid sum: $3.3 billion to Israel.

The fact that the Ukraine war is also the war of the U.S., NATO, and the EU is increasingly emphasized by the capitalist establishment. The success of Ukraine in recent weeks is “a victory for Biden’s foreign policy,” wrote a leading Washington Post columnist, EJ Dionne Jr. EU Commission President Ursula von der Leyen devoted most of her annual “State of the Union” address to the European Parliament to the war. “Europe has been on Ukraine’s side from day one. With weapons. With means. With hospitality for refugees. And with the toughest sanctions the world has ever seen. To date, Team Europe has provided more than €19 billion in financial assistance. And that’s not counting our military support.”

She stressed that the Ukrainian army is fighting for the EU, and for “democracy against autocracy.” That the EU is simultaneously courting the dictatorships of Qatar and Saudi Arabia to buy gas and oil underlines the hypocrisy of this. For the West, it is not about democracy but curbing Russian imperialism. NATO’s Jens Stoltenberg has also re-emphasized the military alliance’s priority: “By ensuring that Russia, President Putin, does not win in Ukraine, we also increase our own security and strengthen the alliance.”

In Germany, pressure is mounting to send tanks to Ukraine, something the US is also considering. There are also plans in the U.S. to possibly provide Ukraine with fighter aircraft, something the U.S. opposed at the start of the war. At the same time, the U.S. and NATO maintain the line that Ukraine should not attack targets inside Russia. Kiev has also denied involvement in the attacks in Russia, and also in Crimea. Partisan attacks with bombs and mines, which also kill civilians, are also ongoing in the Russian-controlled areas of Donbas.

Western imperialism wants to see Russia defeated in Ukraine, but avoid extending the war beyond its borders. There is concern about how Putin will respond, with the risk of escalation with chemical or even nuclear weapons, although that is not the most likely outcome now. Hawks in the West, like the right-wing governments of Poland and the Baltics, are arguing for escalated military action.

Still Far From Over

The war is still far from over. In Russia, warmongers dominate the debate, but without seriously threatening Putin’s power. Perhaps the protests against the war will eventually pick up again. A local district council in St Petersburg has attracted attention for its demand that Putin be court-martialed. “I have received almost exclusively positive reactions. I wasn’t expecting that at all. I thought I would get a lot of threats from people who support the so-called special operation. (…) People want to take pictures with me in the street,” says the initiator Dmitry Paluga to Dagens Nyheter. Their appeal is mostly about how Russia is seriously negatively affected by the war.

In Ukraine, success on the battlefield at the moment most likely means that Zelensky’s government has even greater support. Hopes for a military victory and an end to the war are growing. But Ukraine’s workers and poor cannot rely on Zelensky and his allies in Western imperialism. The EU, promising closer ties, and the IMF, coming up with new so-called aid packages and demands, will shift the heavy costs of the war onto the Ukrainian population. Already, the government has abolished labour rights for 94 percent of workers according to the international trade union federation ITUC and implemented privatizations. The working class and the left must organize themselves independently, with a program of struggle, internationalism and workers’ rule, including rights for all minorities. The crises of global capitalism already before the war had devastating consequences for Ukraine’s working population. The risk of war will not disappear after any agreement in the future, any more than the 2014 agreements led to peace.

Globally, the war has greatly sharpened imperialist antagonisms, as well as the nationalism and militarism of governments. New conflict hotspots await as the economic crisis and the struggle for energy resources deepen.

At the recent summit in Uzbekistan, Putin was forced to refer to China’s Xi Jinping as having “questions and concerns” about the war in Ukraine, even though Xi Jinping called Putin his “old friend.” For Beijing and especially for Xi Jinping’s one-man dictatorship, a defeat for Russia would be a major setback, while the Chinese dictatorship does not want to incur sanctions from the West and has therefore refrained from military support.

The war in Ukraine is part of the very serious and deep crises of the capitalist system in the 2020s. There is no other solution than the common struggle of the working class against capital, imperialism and militarism, for a completely different, democratic socialist social system.