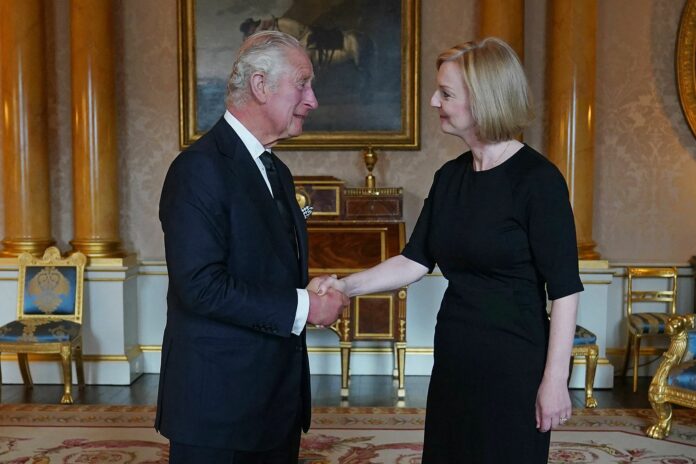 As Liz Truss begins her tenure as the UK’s new Prime Minister, she inherits deep unpopularity from her predecessor Boris Johnson, presiding over a major downward trend of the average person’s living standards.

The average worker in the UK has had an effective 3% pay cut over a period of just three months. This is the biggest single decline since the 1970s. Meanwhile, the economy is already shrinking and the outlook is grim. The Bank of England predicts a lengthy recession.

The Tory party’s internal divisions have deepened over the course of the leadership race. Truss will suffer from weak authority in a parliamentary party which overwhelmingly backed her rival. Even before she assumes office, pressure is mounting from multiple directions. Inflation is now expected to reach over 18%, an enormous jump. Should Putin choose to turn off the gas tap to Europe completely (already having significantly cut supplies), this figure could end up being a serious underestimate.

It is no wonder, then, that the issue that dominates discussion in workplaces and mess halls, at school gates or in pubs, is the rising cost of living. Truss has so far insisted on not outlining any concrete policies which might alleviate this crisis. Attempting to play to the reactionary base of the Tory party, she has instead emphasized tax cuts. In practice, she means tax cuts for the rich.

This contest has revealed a capitalist political elite who seem to live on a different planet to the rest of us. This includes Labour’s New Blairite leadership. Labour Party leader Kier Starmer has spent the summer opposing workers taking action to fight real-terms pay cuts by sacking ministers who dare to appear on picket lines. At the same time he has systematically ruled out policies, such as energy nationalization, that would actually offer the prospect of some relief from the onslaught on living standards.

But back in the real world, a profound radicalization is taking place across huge swaths of society. With fuel bills set to hit an eye-watering £4266 this year and parasitic private providers recording record profits, even a majority of Tory voters express support for energy nationalization when polled.

At the same time, determination to fight back is building, with striking rail workers and postal workers currently in the vanguard. Among the working class as a whole, support for strikes is strong and is growing. More than 62% of the public say they sympathize with rail strikers, for example, compared to 25% who say the same for the government.

Workers who face sweatshop conditions in Amazon warehouses have also begun to struggle, following in the footsteps of their colleagues in the U.S. who have been fighting to unionize (with support and solidarity from Socialist Alternative stateside). Bravely, staff have organized walkouts and sit-ins at at least 4 different sites in the UK so far. At the same time, 91% of workers organized by Unison in NHS Scotland have just voted to reject a derisory pay offer, with 83% indicating preparedness to take action.

The potential clearly exists for a rising tide of strikes and protests to dominate the autumn, which could even make Britain ungovernable for the Tories. Workers across multiple sectors are already beginning to strike together — something which rank and file workers and union activists must continue to build and push.

With a clear lead from the union leaders, including the TUC, generalized action would be possible – which would shake the foundations of the Tory government. But a barrier to this huge potential being realized is the poor record of many trade union leaders.

In recent years, they have all too often failed to call for and help organize the massive ground floor operation needed to smash draconian anti-union ballot thresholds. Similarly, they have been unwilling to support workers taking action in defiance of these undemocratic laws.

It’s this vacuum of leadership which currently threatens to derail what should be an autumn of mass struggle and of big victories for the workers’ movement. It is positive, therefore, that the CWU and RMT seem to be seeking to help fill in this gap, and to help draw wider layers into struggle, through the launch of the Enough is Enough campaign. The overwhelming response to this call in the very first hours of its announcement is again testament to the anger currently just below the surface.

Socialist Alternative welcomes this, and argues that for the initiative to act as a conduit for the mass anger in society, it must be a forum for a huge democratic discussion on the fighting program our movement needs. It must be ambitious in its approach to helping to coordinate and escalate strikes, and should link up with social movements against sexism, racism, and queerphobia, and for climate justice. It could build massive demonstrations and solidarity actions in support of workers on strike, and ought to play a part in helping to organize currently unorganized layers of working-class people.

There has been an explosion of discussion about a mass boycott of energy bills. Drawing upon the example of the anti-poll tax unions (led by Socialist Alternative’s forerunner organization, Militant), which built huge networks in communities which could defend those facing bailiffs (or worse) for refusing to pay the hated tax, a non-payment campaign could go from being mainly an internet phenomenon, to something with far more potential.

Across all of these struggles, an essential element is putting the urgent necessity for socialist change squarely on the agenda. Fourteen years on from the financial crash, workers are once again being asked to pay for what is an even bigger and more all encompassing crisis of this rotten system. Meanwhile those who, like Corbyn, have sought to offer an alternative without pointing clearly to the need to go beyond the confines of capitalism, have been mercilessly marginalized by the defenders of the system.

Socialist Alternative fights for nationalization of not only energy and utilities, but of all the banks and major monopolies that currently dominate our economy. And we see working-class people, who generate wealth and keep everything running, as the key agents for change within society.

It’s workers who, on the basis of democratic control over the economy, could reorganize production in the interests of people and the planet. If you agree, and you want to help build a movement to fight unashamedly for socialist change, we urge you to join us.