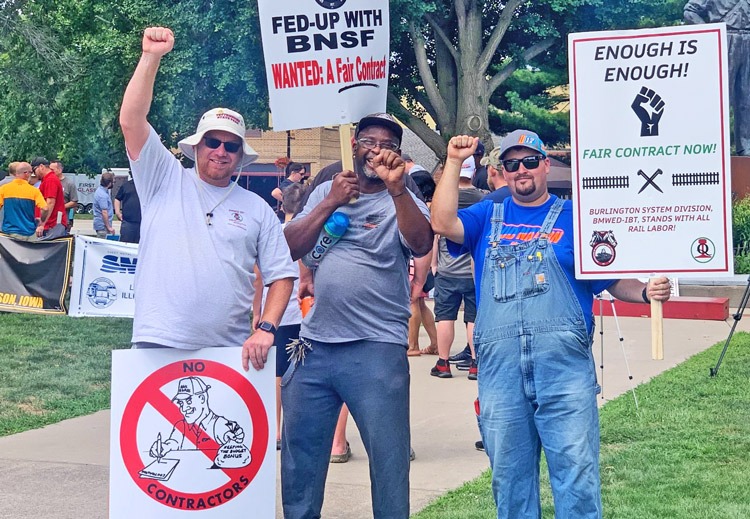 “The railroad workers are fighting for all of us — for every worker who is forced to do without paid sick leave and is unable to take care of themselves or loved ones without being subject to cruel threats from their employers. That’s why it is crucial that the entire labor movement stand with railroad workers if they choose to reject the current inadequate contract offer, negotiated undemocratically behind closed doors, and start preparing for a strike.”

SEATTLE – Councilmember Kshama Sawant (District 3, Central Seattle), chair of the Sustainability and Renters’ Rights Committee, released the following statement in solidarity with railroad workers in Seattle and across the country:

“Socialist Alternative and my office stand in solidarity with the 120,000 railroad workers across 13 unions fighting for a fair contract that includes paid sick days, affordable healthcare, wages that keep up with inflation, and fixes to the severe staffing and safety crises facing rail workers. We support today’s railroad workers’ National Day of Action to demand more than the abysmal changes the railroad billionaires and the Biden administration have been willing to offer. Community organizers from my office will be joining picketing railroaders today at the Argo yard in SODO.

“The railroad workers are fighting for all of us — for every worker who is forced to do without paid sick leave and is unable to take care of themselves or loved ones without being subject to cruel threats from their employers. That’s why it is crucial that the entire labor movement stand with railroad workers if they choose to reject the current inadequate contract offer, negotiated undemocratically behind closed doors, and start preparing for a strike.

“Rail companies and their shareholders have raked in massive profits in recent years. Since 2010, shareholders have collected a mind-boggling $183 billion in stock buybacks and dividends. BNSF and Union Pacific, the two largest rail companies, both reported record profits in 2021 for multi-millionaires and billionaires like Warren Buffett (who owns BNSF). Each individual rail worker generates more than $330,000 in annual revenue for the freight industry. Without railroad workers, the economy doesn’t run.

“Scandalously, the companies and the billionaires who own them have slashed jobs and made working conditions intolerable. Workers are called on short notice and must report within 90 minutes to the yard, travel 12 hours from their home terminal, then wait unpaid for 18 to 48 hours until they can take another train back home. They are forced to do this without even a single paid sick day! This is why among rail workers there’s a grim joke that the initials BNSF stand for “Better Not Start a Family” — but the grueling conditions are no laughing matter.

“Thousands of rail workers have been laid off — 45,000 just in the past six years. These mass layoffs have made conditions yet more unsafe for the remaining workers, at the same time contributing to the supply-chain crisis and record inflation over the last year. The effect on rail safety is frightening. The Federal Railroad Administration reports that, since 2012, all of the major railroads had higher rates of train accidents or incidents, higher rates of yard switching accidents, higher rates of equipment defects, and more deaths, all while total train miles were down by roughly 40 percent.

“The Biden administration has put forward a “compromise,” negotiated with the rail bosses behind the backs of the workers, which fails to meaningfully improve conditions. It includes only one paid personal day, a gross insult to the railroad workers who have correctly made reasonable access to sick leave a central demand of their fight. Many rank-and-file members have already made clear that this is unacceptable. The Machinists, who were not part of the White House negotiations, announced that their members had rejected the previous agreement that was almost identical!

“It’s clear that Biden and the Democratic Party leadership have a cynical interest in delaying subsequent railroad contract negotiations, and averting a potential strike, as it allows them to sidestep potential economic impacts before November’s midterms. By abandoning workers in service of their own narrow electoral calculations, rather than standing with them, the Democrats are showing once again they are no friend of working people, while handing further ammunition to Republicans and the right wing.

“My office has consistently stood with union members fighting for strong contracts. We stood with Teamsters in 2018 for a strong contract at UPS, carpenters on strike in 2021, healthcare workers at Swedish and University of Washington, and Starbucks and Amazon workers who have led a resurgence in union organizing this year. Most recently, we strongly supported the Seattle Education Strike for major improvements in staffing and pay.

“The current rail crisis is a product of the unlimited greed of the railroad bosses, who under capitalism’s brutal logic, put profit over the basic needs and lives of working people. That’s why the working class needs to fight to bring railroads and the freight industry under democratic public ownership, to be run by workers themselves.”