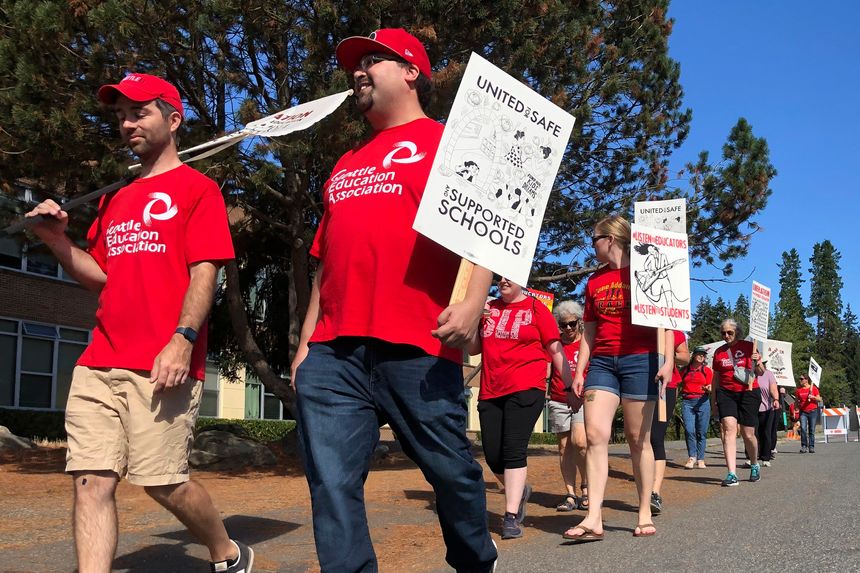 Matt Maley is a rank-and-file member of the Seattle Education Association.

Rank-and-file members of the Seattle Education Association are on strike for staffing improvements and living wages in a severely-underfunded public school system. We need a big, public rally this weekend to bring the working class together in active solidarity with public school teachers and students!

Seattle’s public school educators — the 6,000 members of the Seattle Education Association (SEA) — are on strike amid record inflation and soaring rents in the city. Not only has Seattle Public Schools (SPS) refused to meet even the educators’ most basic demands, the strike is taking place in the aftermath of local and Washington State Democrats having appallingly starved public schools of funds for decades.

SPS Cutting Pay & Staffing Levels — We Need to Fight Back!

After more than a month of bargaining, the SPS continues to stonewall the union on a fair wage raise to keep up with inflation, and refuses to address the abysmal staffing levels to solve our chronically growing workloads, class sizes, and caseloads. SEA members recently took a strike authorization vote, with an unprecedented 75 percent turnout, where 95 percent of us voted yes, to strike.

Educators would need at least a 10-percent raise this year just to break even. Anything less would be a de-facto pay cut. In reality, educators deserve more than break-even wage increases. This means fighting for an immediate 10-percent raise plus full Cost of Living Adjustment (COLA) every year going forward. SPS and the state are currently only murmuring about 6.5 percent — in other words, a big pay cut. The current salaries for paraeducators and instructional assistants are shockingly low, at around $20/hour. Even many school districts in smaller cities neighboring Seattle offer better pay.

Meanwhile, SPS is attempting to cut staffing for already under-resourced special education and multilingual classrooms, forcing educators to do more with less. This type of ruthless tightening of the screws is forcing teachers to leave the profession at a historically high rate nationwide.

The National Association of Social Workers recommends one social worker for every 250 students, yet social workers at Seattle schools can be responsible for as many as 700 students. The student to nurse ratio in Seattle is a shocking 1,000 to 1. Washington state also has one of the worst rates of inclusion in the nation for students with disabilities into the larger classroom setting, even though research on inclusionary education shows better academic and social outcomes for all kids.

Winning any of our demands — better staffing levels, inflation-adjusted wages, or inclusion and other special education needs — will require SEA to fight alongside the community for increased funding of public education.

How did this strike come about? Educators have been upfront about the basic needs of our schools, students, and staff, while SPS administration has stalled bargaining for months. Things came to a head when SPS refused to show up to a previously scheduled bargaining session, and then proceeded to mislead the public by blaming SEA for the breakdown in communication. SPS is clearly not bargaining in good faith. SEA leadership and my fellow rank-and-file members need to hold the line and organize with parents and the broader community around a clear set of demands to counter these insulting cuts to staffing and teacher pay.

It is clear from the powerful teacher strikes of recent years, from West Virginia to Minneapolis, that working people strongly support public school workers, and will fight alongside us if we actively mobilize them in our struggle.

On Tuesday, September 6th, there was a rally outside SPS headquarters, where hundreds of educators came out to make signs and chant. Picketing began at 7:00 a.m. on Wednesday, with SEA members marching and chanting outside more than a hundred schools across the city. In conversations with many of my fellow members, it was clear they agree that the interests of educators and students are tied together. Educators and supporters chanted, “When special ed is under attack, what do we do? Stand up, fight back!” and, “Fund our schools, tax the rich!” We were joined at the pickets by socialist City Councilmember Kshama Sawant, who emphasized the solidarity from her Council office and her organization, Socialist Alternative.

What We Need to Win

We need a short, sharp strike to win our demands. A long, protracted strike that does not win momentum for the union could dissipate community support and demoralize the rank and file, especially because attacks from the corporate media and the political establishment will grow. SEA should urgently build community support with petitions around our demands on staffing, inclusion, and wages. The union should host public rallies and marches, and canvass the neighborhoods around each school. With the union and community united behind a clear set of demands that reflect the interest of teachers, students, and parents, SPS could be forced to settle a favorable contract for members.

The labor movement is the strongest when it works together. We must fight for the needs of the lowest-paid workers, such as paraeducators and instructional assistants, in addition to classroom teachers. We cannot ratify a contract that sells out one section of workers for small gains. SPS already made it clear what they think of members when they promised an unspecified pay raise in return for the union signing away our right to strike. This is outrageous and shows that workers cannot put any faith in the bosses.

Versions of this same situation are playing out in school districts across the country right now, and a strong strike and victory by the SEA would provide an invaluable example to help other unions resist their concessionary contracts and start to turn the tide against the broad attack on public education funding currently underway.

A Big Weekend Rally & Other Next Steps

In building for a short and effective strike, it is crucial that we have a big, public rally as soon as possible. A public rally will help to actively build on our community support, and will help mobilize young people, union members and other workers to our picket lines.

Union members need to know what our “must haves” are in the contract. We should not accept a weak first contract because we feel pressure from SPS and the political establishment. We need to highlight clear demands and bring out community support to inoculate against those pressures. It will not be enough to rely on the militant minority of schools with active memberships, so SEA should actively build the pickets at every school and reach out to parent groups, PTSAs, and social media groups to explain how they can best support the strike.

At the middle school where I work, SEA members have stepped up to lead in creative and inspiring ways, from cooking lunches to organizing a constant supply of coffee. The union should build on this rank-and-file enthusiasm by organizing nightly citywide meetings for members to discuss the status of the strike and to make important decisions about our tactics and plans for escalation.

In the coming days, we will need material support from the wider working-class community. The most important thing any community member can do is demonstrate visible support for our demands — show up to a picket line, attend community rallies, submit a solidarity resolution in your union local, and share social media. We’ll also need help with things like food, beverages, and picket supplies, as well as donated time and labor to keep the line strong.

For our part, SEA members need to be the confident front lines of this fight, holding strong to our demands, which benefit the whole community. We should also appeal for solidarity donations to our union’s strike fund. Councilmember Sawant, who takes home only the average worker’s wage out of six-figure City Council salary, is donating $5,000 from her solidarity fund.

The Role of the Democratic Party

Public schools across Washington State have been facing a dire shortage of funds for decades, even though the state has been home to huge and profitable corporations and a number of multimillionaires and billionaires. Many of these elites have also increased their wealth at an eye-popping rate during the pandemic.

Democrats have controlled the Seattle City Council for decades. They have also controlled the Washington State Governor’s mansion for 30 out of the last 30 years, the Senate for 20 years, the House for 23 years. Yet, shamefully, Democrats in both local and state office continue to refuse to fully fund public education by taxing the rich. Democrats have no problem, however, funneling money toward corporate handouts and already-bloated police budgets. Just last month, Democrats on the Seattle City Council ended the $4/hour pandemic hazard pay for grocery workers, and voted to give $30,000 hiring bonuses to police. Sadly, these are the real priorities of the Democratic Party.

In contrast, Councilmember Sawant strenuously opposed ending hazard pay and has unambiguously fought alongside striking union rank and file throughout her nearly nine years in office. When SEA members were on strike in 2015, Sawant’s office organized an unprecedented solidarity rally inside City Hall. Alongside SEA and the wider working class, her office won a City Council resolution in solidarity with the striking educators.

Sawant has repeatedly pointed out the decades of criminal underfunding of public education by both Democrats and Republicans while giving sweetheart deals to corporations like Boeing and tax havens for billionaires like Jeff Bezos. Through the grassroots Tax Amazon movement, Sawant’s office, rank-and-file Black Lives Matter activists, and union workers won the historic Amazon Tax in 2020 to fund affordable housing and Green New Deal programs. We will need a similar fighting strategy around concrete demands to win the schools we need, as well as victories in the wider labor movement.