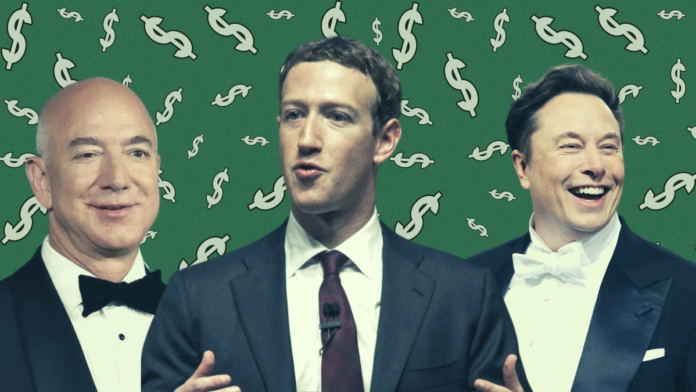 A recent Bloomberg article title tells us just about everything we need to know about skyrocketing economic inequality: “World’s Super Rich Drive 77% Surge in Superyacht Sales Last Year.” After noting that sales have also doubled from the 2019 levels, the article continues:

Low interest rates and bumper markets fueled $1 trillion in gains last year for the world’s 500 richest people, according to the Bloomberg index. That wealth creation and heightened demand for solitary recreation due to Covid-19 were among the primary drivers of the spike in sales.

In the course of time that it took you to read the above sentence, probably around 10 seconds, Jeff Bezos made roughly $25,000 according to most estimates of how much his net worth has increased over the two years since the start of the pandemic. In case you were wondering, Jeff Bezos’ latest 417-foot yacht, the longest in history, is worth nearly half a billion dollars.

Amidst skyrocketing inflation, working class people have pulled back on spending, depleted what meager savings some of us had, and are finding it hard to keep up with rent, utilities, and food. Meanwhile, the ultra-rich are continuing a spending spree on travel, cars, hospitality, and real estate – which in turn is further fueling inflation for everyone.

Who Makes Their Wealth?

Billionaires got to where they are not primarily because they’re smart, innovative, or supremely talented, but rather through the ruthless exploitation of the working class. Jeff Bezos didn’t “make” $25,000 in ten seconds – it was the people in warehouses, the delivery drivers, and all other workers every step of the way who did. Instead of that money going into the workers’ hands and back into society, it went into his bank account.

Bezos and others like him use their immense wealth to control and rig the political system in their favor. They throw around billions of dollars in elections which puts politicians directly under their control, and individual billionaire donors will frequently donate to Democrats and Republicans alike in more or less equal measure. This is why taxes on the wealthy have gone down in recent decades, that public services such as education have been decimated and privatized, and that the legal rights of workers to unionize have been curtailed. It’s the reason why a decent living is unattainable for so many people.

Billionaires didn’t do all of this simply because they’re cruel or immoral people, but because of the imperatives of the capitalist economic system. Under this system, there are two basic classes – capitalists and workers – and everything is organized around the relationship between the two. Virtually all problems in society boil down to the fact that we as workers don’t control the wealth that we produce or the way society is run. Billionaires act in a cruel way because the system itself is cruel, and getting them to change their ways isn’t a question of just appealing to their good sense or morality – they have to be organized against and fought.

Workers on the March

If you look at a graph of union membership and economic inequality, there’s a perfect correlation: as the number of Americans in a union has decreased over the past few decades since, the level of inequality has gone up in nearly exact proportion. This is no coincidence because unions are the most important tool that we as workers have to fight back in a system where the bosses’ interest is always for us to work more, for less money, and in worse conditions.

Everything that we as workers gain comes at their expense, and vice versa. Workers understood this in the 1930s and 40s, which is why tens of millions joined unions and went on strike in hugely profitable industries like steel, automobiles, mining, and more. Employers today fear this happening again, which is why they spend so much time and money trying to stop workers from forming them, as anyone who’s ever gone to work for a major retail chain store knows when they play you an anti-union video in your new hire orientation.

After a period of a few decades of decline and defeat under the blows of a full-scale offensive by the billionaire class, the labor movement is once again beginning to stir and workers are on the march. Starting in 2018, there’s been a significant increase in the number of union elections being held as well as strikes, the most powerful tool that workers have. Workers at Starbucks and Amazon in particular are pointing the way forward by taking on two of the most recognizable giant billionaire-led corporations that dot the American landscape, but they are not alone and workers at jobs both big and small are organizing in the workplace.

Workplace struggles are critical because it’s where workers have the most leverage – if we don’t work, they don’t profit, and their system grinds to a halt unless they give in to our demands for better wages, benefits, and working conditions. These labor struggles on the shop floor need to be linked to a struggle in wider society to curb their control over the political system by ending PACs and capping campaign contributions, and by taxing them to pay for Medicare for all, free higher education, and a Green New Deal.

In Seattle, Socialist Alternative and our elected independent councilwoman, Kshama Sawant, have repeatedly waged such a struggle against the billionaire class, including by leading a successful grassroots movement to win a first-in-the-nation tax on big business that secures over $200 million annually in funding for affordable social housing. We’ve also beaten off big business-backed Democratic Party candidates who have attempted to unseat Sawant multiple times, as well as defeating a racist, right-wing recall campaign against her in 2021.

Billionaires Should Not Exist

Through rebuilding powerful unions and strong mass movements, we can win major gains that blunt the power of the superyacht owners in the workplace and in broader society. It’s a total obscenity that the top 0.01% of the world holds 11% of the wealth while food, shelter, and health care are out of reach for hundreds of millions. However, simply restraining their power and taxing their wealth isn’t enough to break their control over our lives. Our political institutions aren’t simply “bought off” by the billionaires – the state was created by them and is controlled by them at its core, it’s not something neutral that we just need to “win back.”

Anything that we aim to win at their expense they are going to fight tooth and nail and try to get rid of. In order to break their power and influence entirely, we need to fight for a completely new socialist society where our workplaces are democratically controlled by workers ourselves as part of a wider planned economy that breaks with the supposedly “rational” market. The ultra-wealthy don’t just exist in the United States either, 75 countries have at least one billionaire and this includes even some of the world’s poorest countries where the majority of the population lives in abject poverty while a wealthy few profit off their misery. The capitalist system is a global one and we need a global working class struggle against it, which is why Socialist Alternative is part of an international organization with sections in over thirty countries, the International Socialist Alternative.

Billionaires should not exist – unionize every job, tax the rich, and fight for socialism!