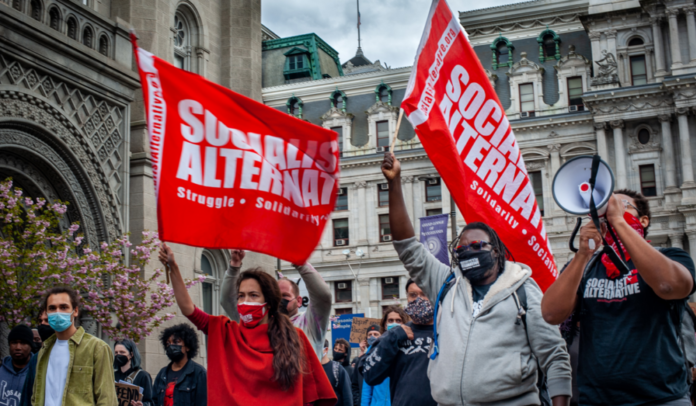 The climate crisis, global pandemics, war, inflation, the rise of the far right – for young people today, the idea that we’ve reached the pinnacle of human civilization probably sounds more ironic than serious. Yet this now absurd assertion was broadly accepted and taught in economics and political science classrooms across the U.S. a mere decade ago.

Today, young people are more likely to draw the opposite conclusion, that the problems facing humanity and our planet are too profound to be resolved. Popularly referred to as “doomerism,” this sense that there is nothing we can do to reverse the tide of worsening social, economic, and environmental problems can easily seem like the only realistic interpretation of the current state of the world.

Things are objectively getting worse for the vast majority of ordinary people around the world: inflation is out of control, climate change is already creating food and refugee crises, and in many countries the far right is again on the offensive against women, LGBTQ people, and racial and national minorities. Falling living standards and increased repression contribute to a profound and devastating lack of stability for individuals and families, which in turn contributes to increased rates of untreated mental illness, violence, and abuse. On top of that, we have the constant threat of ongoing global pandemics and now also a war that is rapidly polarizing the entire world between two nuclear superpowers: the U.S. and China.

Looking at the world today as a snapshot, it’s hard to see how one could draw anything other than deeply pessimistic conclusions. But doing that is a bit like pausing a movie on a single frame and trying to predict the ending – it doesn’t show the underlying dynamics that led to the present situation, the unresolved tensions, the story arcs in progress.

The more we dig into the underlying processes that brought us to the present moment, the less the future looks like a straight line towards certain doom. In fact, the same force that has succeeded in ending imperialist wars, advancing human rights, and raising living standards in the past – the working class – is only just beginning to put its mark on the events of today. Far from being relegated to passive viewers of the decline of human civilization, we ordinary people have the power to influence the course of events today and shape the future.

It Doesn’t Have to Be This Way

“At those crucial moments when the old order becomes no longer endurable to the masses, they break over the barriers excluding them from the political arena, sweep aside their traditional representatives, and create by their own interference the initial groundwork for a new regime…”

Leon Trotsky, Preface, The History of the Russian Revolution

In school, the history textbooks attribute most of the major events and changes that have shaped human history to decisions by powerful individuals – kings and queens, presidents and parliaments, tycoons and tyrants. The outbreak or resolution of war, the development of industry and technology, and the advance or retreat of progressive laws and values all tend to be credited to the wisdom (or lack thereof) and personal qualities of leading figures in society – the “great men of history” theory. In reality, major developments in society are a product of millions of ordinary people working together to improve their lives.

Since our early days as hunter-gatherers, humans have constantly been striving to develop new and better ways to survive, to get our basic material needs met. To this end we developed first agriculture and simple machines, then steam and combustion engines, then computers and microchips.

Each new advance grows the total wealth of society and, ever since social classes began, increases the power of those who control the wealth versus those who create it. Throughout history we’ve called this group of people different things: rulers, emperors, kings, the elite, the 1%, and today “the billionaire class.” They’ve used different means to control workers throughout history. They can use force and violence, but this is costly because it inevitably reduces the productivity of the workers.

Far more beneficial to the billionaires is to convince the workers that they have no choice, that the exploitation and oppression they experience is natural and unchangeable. This is the basis for the historical idea that Kings and Queens are chosen by God, and that only the meek will get into heaven. It’s also the basis of racist and sexist ideas that certain groups of people are inherently smarter, harder working, or more moral than others.

Inevitably the ruling class always has to use a combination of ideology and force to maintain their privileged position over the rest of society. This becomes harder and harder the bigger and more obvious the gap between the quality of life of ordinary people and the ruling class becomes. You may see that some people are much richer than you, but so long as you feel your own position is rising this isn’t necessarily a source of anger or resentment. We’re all just future billionaires, right? However, if you’ve just lost your job, had your rent raised with no pay increase, or realized you won’t be able to send your kids to college, watching the rich get richer just “hits different.”

Capitalism, and the capitalist class, have passed the tipping point from being a driver of growth of the productive capacity of human society to being a net brake on it. This is obvious just from looking at the energy industry: despite sharply diminishing returns and a climate crisis now threatening global food production, capitalists continue to invest in exploring, extracting, and running the world on fossil fuels rather than developing already existing technologies for renewables, which we already know have the potential to be a far more efficient and plentiful source of energy for humanity than fossil fuels ever could be.

This system’s addiction to fossil fuels has massively held back the development of transportation infrastructure – high speed rail is far more efficient at transporting people and goods than cars, airplanes, or trucks will ever be, yet our entire infrastructure continues to be built around the former.

We’ve long since passed the point of being able to produce enough food to feed the world – all hunger that exists today is the result of market failures, not natural or technological ones. This historic milestone of humanity was achieved under capitalism, but is on track to be lost again as climate change erodes the quantity and quality of arable worldwide.

Inevitably throughout human history, when a system begins to break down, workers reach a point where they reject the existing system and take matters into their own hands, replacing the old order with a new and more progressive one that allows the productive capacity of society to grow again. This has never happened via the old rulers being convinced to peacefully abdicate power, but by an all-out struggle by the masses of ordinary people who use their collective power as the majority to seize state power from the minority exploiters.

The material conditions exist for the masses to once again use the strength of our majority to rise up and replace the current outdated, destructive mode of production with a new one that will allow us to further develop the efficiency and productive capacity of human society as a whole. But while attempts to overthrow the current system are guaranteed to happen and are in fact already happening in various parts of the world, the success of these efforts is far from guaranteed.

While the idea of a popular revolution to overthrow the system might seem far-fetched in the United States, many such revolutions have already happened in our lifetime and the rate at which they are happening is increasing globally. The Arab Spring uprisings in 2011 marked the start of a new wave of revolutions against unlivable economic conditions and dictatorial repression in the developing world.

The ousting of a genocidal war-criminal president by Sri Lankan masses just last month is the latest example that proves that ordinary people still have the power to change the course of history when acting together with a clear common goal.

We can’t fully predict when a revolution might happen, but we do know they’re most successful when the working class is already well organized. This is sorely lacking today after decades of neoliberal attacks on unions and workers parties across the globe.

But the trend of workers getting organized and taking action is accelerating worldwide. In the U.S., public support for unions is the highest it’s been in generations and the vast unorganized service and logistics sectors have taken the first crucial steps toward unionizing, despite all-out union busting by some of the biggest corporations in the world.

The size and frequency of strikes, the most effective weapon the working class has in the battle against the bosses, have begun to increase not just in the U.S. but globally. It’s urgent that the union movement continue to grow in size and militancy to build up the power of the working class to the point of being able to contest power with the capitalists not just in one country at a time, but globally.

In addition to getting organized to take on the bosses at work, we urgently need independent political organizations of and for the working class to fight for our interests in the political arena.

In the U.S., the two parties of big business have managed to successfully stave off the creation of a workers party using lesser-evilism, blaming the other party for all the failures of capitalism and promising that things will get worse unless workers vote for them. This year’s midterms are no exception, with Democrats insisting that we need to elect more of them to defend abortion despite doing absolutely nothing to prevent the repeal of Roe while controlling Congress and the White House.

Starting to build a political party for the working class linked to the union movement and social movements but completely independent from big business is the most urgent task facing the workers movement in the U.S. today.

Political leadership that is independent of big business money and political parties is essential for the development of the workers movement at every stage, but it’s most important at the stage where a revolutionary struggle for power breaks out. Most revolutions in the last century have failed to decisively seize power when it became possible to do so because of the political ideas of movement leaders.

The leadership of recent revolutions has lacked a clear understanding of the role of capitalism in holding back economic and social progress and the potential in a revolution to transform society. Instead of these revolutions fully overthrowing the capitalist system, they have ultimately handed  power back to the capitalists in exchange for immediate reforms and promises.  Socialists aim to change that.

Socialist Alternative urges all young people and workers struggling with demoralization in this age of disorder to develop your power as a worker by joining or working to start a union at your workplace and by reaching out to us to continue learning about the revolutionary potential of the working class. Individually we may be weak but when we get organized and act together we are the strongest force on this planet. It doesn’t have to be like this – the world we deserve is possible, and it’s up to us to fight for it.