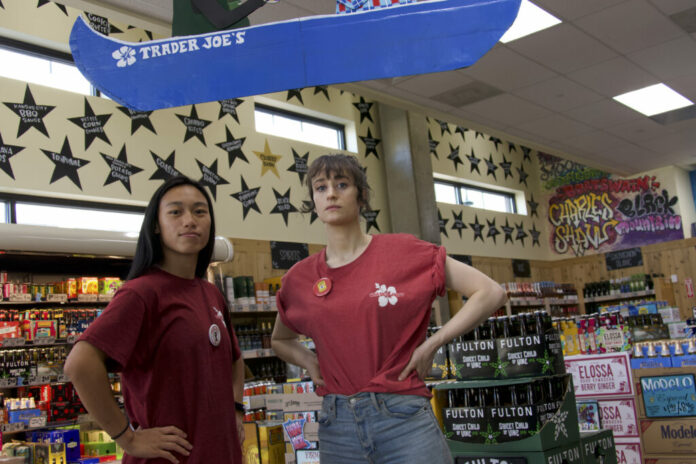 Trader Joe’s workers in Hadley, Massachusetts won the first union at the grocery franchise at the end of July by a vote of 45-31.

Just two weeks later, a second Trader Joe’s in Minneapolis won with a decisive 55-5 election victory. Both stores unionized with Trader Joe’s United (TJU), an independent union. Another store in Boulder, Colorado has filed with United Food and Commercial Workers (UFCW) and is waiting on an election date.

A third victory in Colorado would open the door to many more campaigns at the company’s over 500 locations.

Trader Joe’s United is a union which found inspiration from the Amazon Labor Union victory at the JFK8 fulfillment center in Staten Island this past April.  ALU popularized the strategy of organizing around clear demands like a $30 minimum wage and reforms to conditions at the store like longer breaks. Unfortunately, TJU has yet to replicate this in their own material posted on social media.

These new independent unions, like ALU and Starbucks Workers United, are having great success where more established unions have struggled to organize. This is of course not without challenges. It’s important that these new formations link up and communicate with each other, to learn the best lessons from each fight, strengthening the position of the movement all together.

The momentum in the labor movement comes from the COVID chaos of the last several years of defeats, safety concerns, and mistreatment. Workers have started to fight back rather than just accepting the meaningless applause for essential workers.

Trader Joe’s would have you believe that unions are an outside influence that will stop the corporate office from giving their workers good pay and benefits. This is cut across by TJU’s independent status, being made up of workers at the store. It is also a funny line of argument when you consider the conditions most workers endured under COVID.

In some stores there were pitched battles over wearing masks and gloves while at work, with workers left in limbo as management forbade wearing them. Once the other major grocery store chains made policy changes, and the mask mandates began, Trader Joe’s started acting like protecting workers was their position all along.

For a time, Trader Joe’s did implement some safety and pay changes at the stores. There was an effort to limit the amount of customers in the store, workers received a $4 pay raise for a period, and they implemented temporary COVID sick pay.

From “Heroes” to “Zeroes” in the Eyes of Corporate

From the beginning these benefits were tied to the release of a vaccine. Trader Joe’s did not waffle on this and in the summer of 2021 when vaccines became available to the general public, Trader Joe’s got rid of all these benefits. This means that anyone who caught COVID in the Omicron wave or since has had to either take no pay or clear out their limited PTO while they recover. Trader Joe’s healthcare is tied to your hours worked, workers who have been unable to work because they are ill often lose their insurance as a result!

What followed from the company was an all out attack against its own workers and the extra benefits they had received. The company denied workers one of their yearly pay raises claiming people should be happy with the “thank you” pay they had received. Policy around social distancing and masks were instantly loosened and ultimately dropped as soon as mask mandates ended. This culminated in the company cutting the contribution they make to employees 401k in half, from 10% to a complicated tiered system that leaves the majority of the workforce with a 5% contribution.

As an extra slap in the face to the workforce, the corporation has stopped communicating changes through management, only publishing changes in the corporate bulletin they leave in break rooms across the country. This means that many workers don’t even know about the cut in their benefits, an incredibly shady maneuver from a company that was having anti-union huddles at the start and end of every day in the beginning months of lockdown.

The two wins from TJU were won in response to outrage over pay, healthcare, and lack of communication.

In the Minneapolis store, additional concerns about safety have been raised. It would be a major step forward to concretize these concerns into a set of demands which can echo with workers across the country.

Trader Joe’s union drives have the potential to spread across the country in a similar way to Starbucks, where Starbucks Workers United has seen over 200 union election victories.

With the great resignation seeing people flee retail and customer service workplaces, the workers who remain are doing more work while experiencing these attacks. It’s of vital importance for workers in all these movements to link up in solidarity with one another, sharing strategies and tactics – especially as the bosses begin their counter attack.

Trader Joe’s, which is reported to have made $13.3 billion in revenue last year, isn’t going to hand over more of its profits to the workforce without a fight. The week before the Hadley vote, the company announced a sweeping increase in pay and benefits, although with vague language around the pay increase. These benefits would be implemented at every store except the ones that had filed for union elections. This is an outrageous attack on these workers and a threat against any other store thinking of joining them.

This is a similar tactic to one used by Starbucks and it’s no surprise as both corporations have infamous union busting firm Littler Mendelson on retainer. Starbucks has engaged in retaliation and intimidation in the face of the union drive. This includes directly firing workers leading up the union votes at their stores. Trader Joe’s will also come to lean on intimidation if the drives spread. Workers leading up these drives should discuss the best ways to defeat these direct attacks.

Without the backing of a strong union contract, these new benefits that were introduced as anti-union blackmail will get cut in the search to increase corporate profits. Trader Joe’s has shown this new face only in light of a fightback. Workers need to avoid the trap of thinking that change has already been won by the three stores that filed for an election. If these changes are to be made permanent they will require that the drive spreads across the country and that their key demands are enshrined through collective bargaining.

While all of these drives, from Amazon on down, are important first steps for a growing union movement. To win real gains they need to revitalize the fighting labor strategies that built the unions in the first place. These new unions need democratic structures that put forward clear demands, and a strategy to win them. They should be ready to escalate and use tactics like walkouts, sit-ins, and strikes that won massive gains for working people in the 1930’s and 1970’s.

Trader Joe’s responded to the win in Hadley: “We are willing to use any current union contract for a multistate grocery company with stores in the area, selected by the union representatives, as a template to negotiate a new structure for the employees in this store.”

Trader Joe’s said this because they would prefer to work with the existing layer of conservative labor leaders, rather than an energized, worker-led independent union like TJU. Workers at Hadley should reject Trader Joe’s disingenuous peace offering. This underscores the importance of basing ourselves on the independent power of Trader Joe’s workers, fighting unapologetically for demands based on our needs, and linking up with wider union drives.

While we are in a period of economic uncertainty, with high inflation causing working people to feel a lowering of their living standards, these unions need to be ready to fight for strong contracts that improve  workers’ living standards. We can find inspiration in the fighting movements of the 1970’s which were able to win Cost Of Living Adjustments (COLAs), linking raises to the rate of inflation in their union contracts. All while in a similar era of economic uncertainty. If working people can bring back the fighting tactics that won COLAs in the 1970s, we can win too.